The Azores are a region in Portugal, but their cuisine is unique

Azorean cuisine, native to the Azores Islands, is a rich, hearty, peasant-based style of cooking. Its flavors sing of seafood, spicy stews, sweet desserts, and rich dairy products, but most people assume that the foods of these islands are the same as Portugal’s—if they have even heard of the islands. While some of the dishes are even the same, Azorean and Portuguese cuisines are actually quite different.

The Azores is an archipelago of nine islands of various sizes, all of which are geographically isolated, both from the mainland and from each other. They lie in the Atlantic Ocean approximately two-thirds of the way between the United States and the coast of mainland Portugal. This is one of the main reasons that the food of the Azores is so little known—it isn’t easy to get to them and, in fact, it isn’t even that easy to get from one to the other! Even today, people who live on one of the islands are more likely to have been to the mainland or traveled to other parts of the world than to the other islands in their archipelago.

As a general rule, Azorean cuisine tends to be much more country rustic than mainland Portugal’s. The food is much simpler than the complex flavors of Portuguese cuisine. Common food or dishes include: 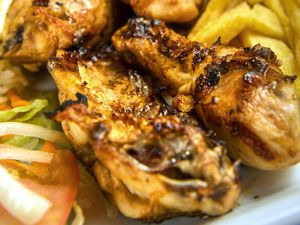