Fennel, with its white bulb and green, feathery top, is a member of the carrot family. The vegetable is native to the Mediterranean and is eaten both raw and cooked in a variety of cuisines, most famously Italian food. Fennel seeds, harvested from the same species, frequently appear in sausages and are a key ingredient in Indian cooking. Fennel is commercially grown in the temperate areas of Europe, India, China, and America, and is harvested in the fall through early spring.

Fennel is a flowering plant consisting of a white, fibrous bulb, green stalks, and feathery, deep green leaves. There's minimal prep involved beyond washing and slicing and all parts of the plant are edible, although the bulb getting the most attention. The tightly overlapping structure resembles a cabbage but is smaller and thicker. The seeds, or fruit, are dried and used as a popular spice both whole and ground. Both the vegetable and the seeds are moderately priced and have a lightly sweet, vegetal licorice taste. It is sometimes erroneously labeled as anise, a totally different plant—although the two are used to make the liquor absinthe.

How to Cook With Fennel

To prepare a fennel bulb, trim any browning from the bottom and remove the stems and fronds. Remove any damaged parts with a knife. If you are serving fennel raw, it's best sliced very thin; a mandoline comes in handy here. Stand the bulb on its root end and slice using a mandoline or very sharp chef's knife. Toss into a salad or slaw and use the fennel fronds as a garnish. Slices of the bulb can also be pickled and eaten as a snack.

If you're planning to cook the fennel bulb, it can be sliced, chopped, or quartered before roasting, grilling, or braising. The stems can be sliced thin and used in recipes like celery or left whole and used underneath a roasted chicken or other meat to prevent burning and add flavor.

Fennel has a delicate anise-like flavor. Raw, it has a vegetal, licorice taste that is refreshing and not overpowering. Its fresh flavor and crunch make it popular in raw dishes and antipasti. Cooked, the bulb mellows even more, losing its bite and gaining a little sweetness. The seeds have a deeper anise flavor without the freshness, lending a nice spice to sweet and savory dishes.

Thinly-sliced raw fennel is excellent added to fall salads, crunchy slaws, or pickled. It pairs nicely with winter citrus fruit like orange and grapefruit. Roast it with meat like chicken thighs or pork, braise in the oven or on the stovetop, or add to pasta. Fresh fennel and fennel seeds both pair nicely with fish, too.

Where to Buy Fennel

Fennel can often be found year-round in the refrigerated produce section of the grocery store. It's typically sold per bulb or untrimmed plant or per pound. It's more likely to pop up from fall to spring when it's harvested in most countries. Look for medium-size bulbs that are plump, firm, and free of soft spots or blemishes. Older fennel will have a shriveled outer layer and droopy leaves. Stalks and fronds should be a perky green color.

Look for locally grown fennel at the farmers' market from mid-fall through early spring. Fennel grows best in areas with cool but not freezing temperatures. When growing it at home, plant in well-drained soil and sow the seeds near your last spring frost date.

How to Store Fennel

Separate the stalks and bulb and store separately in the crisper drawer of your refrigerator for a few days. Really fresh, locally grown fennel can last for up to five days. For best results, use it as soon as possible. Cooked fennel will last up to three days in the fridge.

Dried fennel seeds should be stored in an airtight container in a cool, dark, dry place for up to a year. For the best flavor, use within six months.

Both fresh fennel and fennel seeds are popular ingredients in various cuisines and sometimes are even used together. Fresh fennel is used raw in salads and slaws or cooked in stews or served as a side dish. Fennel seeds (whole or ground) are used in sausages, Indian curries and spice mixes, Chinese five-spice powder, herbal teas, cookies, and more. In India, the seeds are often chewed after a meal to freshen the breath. 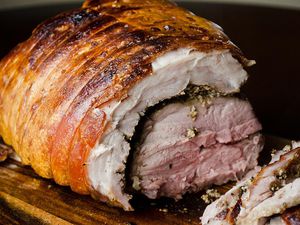