The Anova Precision Cooker Nano is compact and cooks with accuracy, but it has some downsides, like a long preheating time and a fixed (rather than adjustable) clamp.

Buy on Amazon Buy on Walmart Buy on Anovaculinary.com
4.5

Buy on Amazon Buy on Walmart Buy on Anovaculinary.com
In This Article

We purchased the Anova Precision Cooker Nano so our reviewer could put it to the test in her kitchen. Keep reading for our full product review.

Sous vide, which translates to “under vacuum,” is a French style of cooking that involves putting food in a sealed bag and cooking it in a temperature-controlled water bath. While that may sound complicated, it’s actually really simple and straightforward, thanks to sous vide cookers like the Anova Precision Cooker Nano. A smaller and slightly less powerful version of the Original Anova Precision Cooker, the Nano promises that it’s “Small in size. Big on results.” With a claim like that, I had to try it for myself to see if it could cook steak, eggs, and chicken with the precision it promised. Read on to see how it fared.

The Anova Precision Cooker Nano was originally intended to be a much smaller version of Anova’s Precision Cooker. However, since its inception, the Precision Cooker got a redesign (it used to be 14.8 inches tall), and they’re now the same height (12.8 inches), although the Nano is still about 2 inches slimmer, so it takes up less space overall.

Nevertheless, the Nano’s all-black design makes it look sleek and high-end, while the large push-button controls on the touchscreen make it easy to operate. The only knock I had is that the clamp is fixed—a design feature that limits the size of the pot or container you can use to cook in. It would have been a nice touch if the clamp was adjustable, like it is with the Original Anova Precision Cooker, so you could move the cooker up and down as necessary.

The Nano affixes to a pot or cooking container with a turn knob clamp. All I had to do was line it up with the edge of my stockpot and tighten the clamp so that the cooker stayed in place. Once that was done, I plugged it in, set the temperature on the touchscreen, and got to cooking.

The Anova Precision Cooker Nano is ready to go right out of the box, so there’s no setup required. If you want to utilize the smart technology, you’ll have to download the app and connect the cooker to it via Bluetooth—a process that takes an additional few minutes depending on your phone’s download speed. For me, the app integrated with the Nano seamlessly and connected on the first try.

Because the pot was so big, it also took a while—about 30 minutes—for the water to heat up.

Features: Everything you need

The Anova Precision Cooker Nano isn’t especially rich with features, but it has everything you need to pull off some high-quality sous vide cooking. The large touchscreen on the cooker allows you to precisely (hence the name) control time and temperature with 0.1-degree accuracy, so you don’t end up with medium steak when you really wanted medium-rare. It also has a fixed clamp that holds it securely in place.

Perhaps the biggest thing that sets the Nano apart from other sous vide cookers (aside from its smaller size) is its Bluetooth BLE 4.2 capabilities. You can connect the Nano to the Anova app that’s available on iOS and Android, and remotely set and monitor cooking time, so you don’t have to keep going into the kitchen to check how things are going.

The only knock I had is that the clamp is fixed—a design feature that limits the size pot or container you can use to cook in.

The app also features in-depth cooking guides for all types of meat, as well as seafood, eggs, and vegetables. It also has dozens of recipes from basic steak to asparagus to garlic confit, all made with the sous vide cooker. The app is free to download, so you can access these features even if you end up purchasing a different sous vide cooker.

While I found the recipes and guides helpful, I didn’t really see the need for monitoring the cooker remotely. Maybe it’s because I like to get up and stretch my legs every once in a while, but I found it just as easy to walk into the kitchen and take a peek at how things are going.

When you hear the words “sous vide,” there’s a good chance steak is the first thing that comes to mind, so I thought it made the most sense to start there. I used a 10-quart stockpot and filled the water just over the minimum marking. The Nano went down just far enough that I could make it work, but if the pot was any bigger, the sous vide cooker wouldn’t have gone down low enough. I turned the Nano on, set it to 130 degrees, per the “Sous Vide Medium-Rare Steak” recipe in the app.

Because the pot was so big, it also took a while—about 30 minutes—for the water to heat up. At 750 watts, the Nano isn’t as powerful as the Original Anova Precision Cooker, which is 1,000 watts, so a lengthier heat-up time is expected, but I wasn’t prepared for it to take that long. It was really quiet though. I could barely hear the motor, which was nice.

Once the water bath came to temperature, I dropped the vacuum-sealed steak into the pot. One note here: The Anova Precision Cooker Nano doesn’t come with any bags. If you don’t have a vacuum sealer, you can use a regular Ziploc-style bag. Just make sure it’s the heavy-duty, freezer- and food-safe variety.

As the steak was cooking, the temperature varied from 129.9 to 130.1 degrees—an indication that the Anova Nano was able to control the temperature range very precisely. After two hours of cooking, I removed the steak from the water bath, took it out of the vacuum-sealed bag, and seared it for 30 seconds on each side (as per the recipe directions). After searing, I let it sit for five minutes before cutting into it.

As promised, it was perfectly medium-rare, all the way to the edges. It was also considerably juicier than steaks I’ve eaten with other cooking methods. In my opinion, it definitely needed a longer sear though, so I would recommend against following the app’s recipes exactly as written. Sous vide is an excellent way to cook steaks evenly and precisely, but the final step of creating a sear is important to the overall taste and experience, so you want to make sure it’s done right.

After cooking the steak, I tested soft-boiled eggs and chicken using the recipes in the Anova app. The eggs peeled quickly and easily, and the yolk was perfectly runny. The chicken was juicy and tender as if it had been slow-cooked all day.

Cleaning: Only needs a wipe down

Since the Anova Nano doesn’t touch anything but water, cleaning is a cinch. I just removed it from the pot, rinsed it off with clean water, and then dried it with a clean paper towel. If the bag breaks during cooking, you can give the Nano a deeper clean by adding mild dish soap to a pot of water and letting the Nano run at 158 degrees for 30 minutes. If you need to remove gunk and buildup after regular use, you can do the same thing but with equal parts water and white vinegar rather than dish soap.

Price: On the pricier side

At a retail price of $129, the Anova Precision Cooker Nano is less expensive than its full-size counterpart and other popular (and high-end) options, like the Breville Joule, but compared to sous vide cookers in general, it’s still on the pricier side. If the app integration is important to you, it may be worth the extra cost, but if you don’t need the advanced technology, there are less expensive options out there.

Anova Precision Cooker: Since the Nano was born out of customer requests for a smaller version of the original sous vide Precision Cooker from Anova, it makes sense to compare the two models side by side. The Nano is two inches thinner, so it nicely fits into a regular-size kitchen drawer for easier storage, but its shorter design limits the pot sizes you can use since the clamp isn’t adjustable like with the original, larger model. Since it’s only 750 watts (compared to 1,000), the Nano also takes longer to heat up water, so you’ll have to plan for longer prep time than you would with the original. The original Precision Cooker retails for around $199, making it slightly more expensive than the Nano.

Buy it—if you have patience.

The Anova Precision Cooker Nano is a compact sous vide cooker that’s true to its name. It precisely controls temperature and makes perfectly cooked protein every time, but the lengthy heating time can be a bit of a drag. 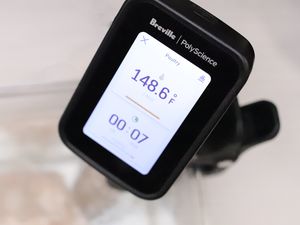 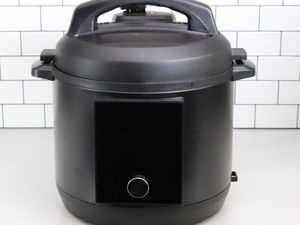