The artichoke is a thistle plant in the genus Cynara, and the globe or French artichoke is the most common variety of this green vegetable. They're mostly grown in California, France, Italy, and Spain, and it's a popular vegetable in European cuisines, as well as the U.S. To a novice, a fresh artichoke can look a little intimidating, and the thorny vegetable takes some preparation to get to the meaty heart. While artichoke hearts are canned and frozen, they're definitely different than the fresh version, which can be steamed, baked, boiled, or grilled.

The artichoke is the immature flower bud of a thistle. It is eaten as a vegetable and is culinarily classified as such. The plant is a member of the aster family, and the bud is harvested before it blossoms. Artichoke is not an easy vegetable to prepare, and you'll need to do some work to get to the edible parts. The outer leaves (called "bracts") of the bud have thorns on the tips (thornless varieties have been cultivated). The base of the leaves is edible and the innermost leaves are tender enough to eat, too. Under those, you'll find a choke (the hairy center) on top of the heart, then the stem. The heart is the meatiest part of an artichoke, and the center part of the stem is also edible. The choke is generally not eaten, unless it's a baby artichoke.

Native to the Mediterranean region, artichoke is thought to be one of the world's oldest foods, even appearing in Greek mythology. Today, it's available in the U.S., growing primarily in California with more than 80 percent of the domestic crop coming from the "Artichoke Center of the World," Castroville. The crops in France, Italy, and Spain supply the rest of the world. Artichoke is not the cheapest vegetable in the market.

How to Cook With Artichoke

Artichoke needs to be cooked before eating, typically by baking, boiling, braising, grilling, microwaving, or roasting. Steaming the whole artichoke is one of the easiest and most popular cooking methods. Artichoke hearts are also added to a variety of dishes, including dips, pasta, and soup.

Properly preparing an artichoke for cooking will make the experience of eating it much more enjoyable. You will need to cut off and discard the stem at the base, the thorns on the tips of the leaves, and the thorny crown. The tough outer leaves are removed, making it easier to get at the soft, creamy flesh on the bottom of the inner leaves and the meaty heart once cooked.

Artichoke is known for its nutty flavor. This is lost a little bit in thornless varieties, which is why many cooks choose to deal with the thorns rather than lose flavor.

Most recipes will call for artichoke hearts, either freshly prepared, frozen, or canned. Artichoke dips are popular party appetizers, though you'll find them in main dishes as well.

Where to Buy Artichoke

In the U.S., globe artichoke is the most common. Although available year-round in most markets, the prime season is from March through May with the second season in October and November. Fresh artichoke can seem a little pricey, which is understandable, considering the work that goes into getting to the little heart inside. It's typically sold unwrapped individually in the produce section; sometimes you can get bulk discounts.

Artichoke plants can be grown in a garden, as a perennial in warm climates and an annual in cooler regions. They require good drainage, a lot of water, and plenty of sunlight to produce flowers.

When shopping for artichoke, select globes that are deep green with a tight leaf formation. It should feel heavy for the size. The size has little to do with quality or flavor and is a personal choice, but consider that the bigger the artichoke, the longer it will take to cook. Small artichoke is just a smaller bud; one plant can produce up to 30 chokes of different sizes.

A good test of freshness is to press the leaves against each other. If it's fresh, you'll hear a squeaking sound. A spongy artichoke is old or overmature, as are those with extremely hard outer leaves and leaves that are spreading out. Browning of the tips can indicate age, but it might also be from frost damage. Aged, dry artichokes should be passed over, but those with a little frostbite on the tips are often considered the best.

Since you don't know how long an artichoke has been sitting on the grocer's shelf, it's best to use them the same day as purchased. When that's not possible, fresh artichoke can be kept in the refrigerator for five to seven days. Before storing, slice a sliver from the stem, sprinkle the cut end with water, and wrap it in a plastic bag.

Artichoke intended for the freezer needs to be cooked first. Freezing it raw will cause it to turn brown, and the taste and texture will suffer. To freeze a whole cooked artichoke, drain completely, wrap tightly in foil, and pack in plastic freezer bags or another airtight container for six to eight months. Leftover cooked artichoke can also be sealed under plastic and kept in the fridge for up to five days. It can be reused in egg dishes, tacos, or pasta recipes.

Though they share a name, artichoke and Jerusalem artichoke (or sunchoke) are not closely related. Both plants are members of the aster family, but they split from there. The artichoke is of the genus Cynara, which includes the cardoon. The Jerusalem artichoke is in the Helianthus genus and a species of sunflower. Additionally, the edible part of a Jerusalem artichoke is the tuber (or root). It is eaten raw or cooked and has a texture much like a potato but with a sweet, crunchy chestnut flavor.

Globe artichoke is the most common and familiar variety, and thornless ones are available. Baby artichoke is also quite popular because the choke doesn't need to be removed. This is not an immature version but a cultivar that simply grows smaller. There are other varieties of artichoke, but most are only available outside the U.S. However, a number of California farmers are cultivating some interesting varieties that are worth exploring. 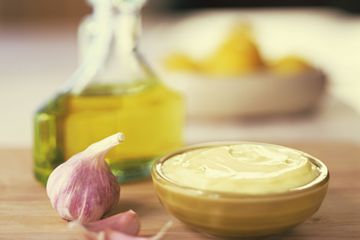