"Houston would likely have starved without immigrants; actually, the city wouldn’t exist without them," wrote David Leftwich of the Houston Chronicle. When publications declared Houston the most diverse city in America this past year, many New York balked. How could a city in the conservative stronghold of Texas possibly beat out New York, a city which prides itself in the fact its inhabitants come from all over?

As someone born and raised in Houston, I spent my high school years living off phở and avocado boba in the Bellaire neighborhood, fajitas every Friday, along with picante-sauce-dipped kolaches and doro-wat-soaked injera filling up the gaps in-between. This collision of cultures has led to interesting culinary developments such as Viet-Cajun crawfish as well as Vietnamese-Mexican dishes. More recently, we’ve seen a growing number of Asian Americans expressing their dual identities through Texas barbecue. It’s these types of evolutions that lead some like Momofuku’s David Chang to declare Houston as “the next global food mecca.”

But let’s not mistake today’s Asian American food for the “fusion” restaurants of the 80’s and 90’s,  which conjure images of white chefs throwing ingredients they deemed exotic into otherwise Western dishes.

Immigrants Have Shaped Barbecue for Centuries

In contrast, Asian American chefs of today are creating something they wish existed when mocked as kids for smelly, odd-looking lunches. “If I was younger and I saw us doing this, I would think being Asian is sick, being Asian is cool. That’s one of the big reasons we wanted to start this ... to make other Asians feel empowered,” declared Houston-native Sean Wen, one of the three co-founders of San Antonio’s Curry Boys BBQ . “In high school, I wished I wasn’t Asian. There weren’t very many Asians. I just didn’t fit in and I felt like the whole AZN 'Got Rice?' movement made our entire race a meme to other people. When I was in college, I became proud of who I was and our cuisine.” His Curry Boys BBQ co-founder, and college buddy, Andrew Ho nods in agreement. They did attend the same high school after all.

Texas barbecue may seem like an odd choice for a second or third-generation immigrant population to dive into, but quintessential American cuisine has long been shaped by immigrants. Barbecue originated from indigenous tribes on the Caribbean islands, a cooking method Christopher Columbus’ Spanish crew called barbacoa. The Spanish explorers then took this cooking technique with them to the colonies. From there, enslaved Africans were forced to work the pits, bringing their own West and Central African techniques of smoking. Fast forward to the late 1800s, Ashkenazi Jews started emigrating to Texas and brought their cuisine with them, which included brisket. They became the first ones to smoke brisket in America. Around the same time, German and Czech immigrants started arriving in central Texas. Their traditional meals were meat-heavy, requiring markets to keep up their stock. Merchants began smoking and slow cooking meats in order to preserve them longer, soon becoming emblematic of Texas barbecue.

A Brief History of Barbecue

“If you’re in Texas long enough, you end up loving barbecue. It’s everywhere,” Wen expressed as he reflects on his time at The University of Texas, situated in Austin, the center of Central Texas barbecue. Ho recounts childhood memories of going to Houston-based chain Luther’s Bar-B-Q (now Pappas) and then, by chance, working as a general manager at popular American barbecue joint Quán Ụt Ụt in Ho Chi Minh City (as someone who also lived in Vietnam, I can attest that every American in the city will end up at Quán Ụt Ụt at some point).

But it wasn’t barbecue that Wen and Ho started with. Encouraged by the positive reception to their Viet-Cajun crawfish boils, the two started their restaurateur careers in 2018 with Pinch Boil House in San Antonio, a city less blessed with Viet-Cajun restaurants than Houston. Originally they began with Southeast-Asian inspired seafood, “but then we hired this new Laotian chef who did an awesome Penang curry that blew our socks off,” recounts Ho. So they took a chance, put the curry on the menu, and today it’s one of their most popular items.

This led them on a journey, visiting places combining both Southeast Asian curries with Texas barbecue like Houston’s Khói Barbecue (a Central Texas-inspired, Asian-influenced barbecue pop-up ran by two Vietnamese-American brothers) and Portland’s Eem (a Thai BBQ joint that is a collaboration between Chef Akkapong "Earl" Ninsom and pitmaster Matt Vicedomini). This planted a seed that germinated during the early days of the pandemic when restaurants closed down and orders were a fraction of what they were before. Now that all restaurateurs had more time on their hands, they contacted their friend Andrew Samia of South BBQ who now takes on the role as the third co-founder and pitmaster of Curry Boys BBQ. By October 2020, after just two pop-ups, the three felt confident enough to set up a permanent location at a little pink shack on St. Mary’s Strip.

Earning BBQ Stripes One Pop-Up at a Time

For Blood Bros. BBQ, it was also a chance collaboration between friends. Robin and Terry Wong ran the bar Glitter Karaoke when a customer appreciation party turned into regular steak nights hosted by their friend Quy Hoang. Soon grilling gave way to barbecuing, and Robin found himself buying a smoker at an industry event. “I called Quy and said, ‘if you’re serious, I’ll split it with you.’ Once we got the smoker, it was a snap. We had an event every month for the next six years.”

Hoang became the first Vietnamese-American pit master in Houston as they worked pop-ups and barbecue festivals over the next six years, building a loyal following before Blood Bros. BBQ opened up their brick and mortar in December 2018. However, the original menus stuck to traditional Texas staples: brisket, ribs, sausage, and turkey. “We wanted to show people we could cook traditional barbecue. We didn’t want to be the Asian barbecue guys. We’re so much more,” Hoang earnestly explains.

Your Guide to Smokers for the Best Barbecue Cooking 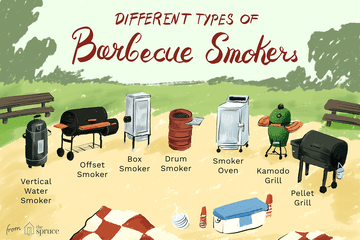 After proving they could dish out traditional Texas barbecue with the best of them, Food Network named them one of the top eight places for Texas barbecue, they slowly added more creative offerings to the menu. The first of which was a Smoked Turkey Bánh Mì. “Early on we weren’t selling a lot of turkey, so we cooled it down to use elsewhere. In wondering what to do with it, I thought how I love cold-cut sandwiches and I love bánh mì’s. Now it's one of our bestsellers,” recalls Hoang.

Robin, who contributes to menu ideation elaborates, “We eat out a lot. We might enjoy a wonton and wonder how it would taste with a smoky element. In fact, we made a smoked head cheese wonton with a broth made from smoked bones. When we take something, we’ll put our own stamp on it.” Terry chimes in, “We just like having fun. We’re not limited on doing Asian flavors. We experiment with all kinds of stuff.”

This open attitude towards all cultures and cuisines is reflected in the three co-founder’s upbringing in Alief, one of the most ethnically diverse areas of the most diverse city in America. In contrast to Wen and Ho, Hoang never saw his Asian-American identity as anything unusual as a child. “Growing up there were people from all over. Back then it just seemed normal to me and we never looked at it any other way.” Their Alief upbringing shapes the menu today. “In just a small area you have Chinese, Vietnamese, Thai, Mediterranean, and whatever food you can think of. We incorporate a lot of the flavors we loved growing up into some of our dishes here,” explains Hoang.

Few things are as American as Texas barbecue: a cooking technique brought to America from the Caribbeans and further evolved by enslaved Africans, Ashkenazi Jews, Czechs, and Germans. It’s only natural that Asian Americans growing up in Houston would leave their mark on the cuisine as well. Could this confluence of cultures have happened amongst people who grew up elsewhere? Certainly. But would it be as fun?

Check These Places Out

Deeply Rooted: How Asian American Farmers Shaped U.S. Agriculture
Featured Video
Article Sources
The Spruce Eats uses only high-quality sources, including peer-reviewed studies, to support the facts within our articles. Read our editorial process to learn more about how we fact-check and keep our content accurate, reliable, and trustworthy.