Use this recipe for the traditional Australian method for grilling shrimp. It is simple and perfect for just about any occasion.

In Australia, they don't say shrimp—they say prawns—as they have an abundance of freshwater prawns rather than saltwater shrimp. But, the tourism ad mentioned below used the term more familiar to Americans. You are likely to get some well-seasoned curse words thrown your way if you call them shrimp when talking to an Aussie. But it's fine to use shrimp rather than prawns if that's what you find at your market.

Australians often grill prawns for Christmas, which arrives with summer in the Southern Hemisphere. They enjoy a picnic in the park or beach with a portable grill or use the one provided in those venues. Beyond prawns, sausages, lamb, pork, and beef you may even see some kangaroo and emu on the grill.

Barbie is Australian slang for barbecue, which usually refers to grilling in Australia. In an Australian tourism ad of the 1980s, actor Paul Hogan (who later starred in "Crocodile Dundee") invited Americans to come to the land down under, and he'd "slip an extra shrimp on the barbie for you."

There Are a Few Differences Between Shrimp and Prawns 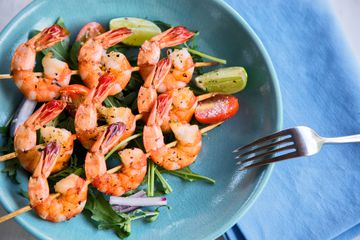 The sides to serve with Australian-style grilled shrimp are similar to what you would see in America.

Shrimp Counts Per Pound and How Much to Serve