Bananas Flambé makes an impressive presentation with the lights off because rum is flamed to finish this simple banana dessert dish popular in the French Caribbean.

This recipe takes less than 30 minutes to make and provides a delicious dessert for a special occasion, or the perfect ending for a romantic dinner for two. Bananas are sliced in half, browned in a skillet, and cooked in rum and sugar with just a touch of lime juice. It is then flambéed, and a dollop of homemade vanilla ice cream is added, if you desire, to provide the ultimate finishing touches. Yum!

This flambé is similar to the New Orleans dessert known as Bananas Foster.

Helpful Tips on How to Flambé 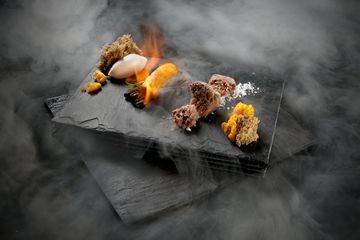 What is Bananas Foster?

Bananas Foster was created at New Orlean's Brennan's Restaurant in the 1950s. It is similar to the above Bananas flambé recipe in that firm-ripe bananas are sliced lengthwise and sautéed. But butter is used, not oil, along with dark-brown sugar, dark rum, lemon juice, and banana liqueur. It is flambéed and served with vanilla ice cream. The dessert was named after a loyal Brennan's customer, Richard Foster.