Each year, as fall approaches and the wine grape harvest gets underway, wine professionals and drinkers alike look to one specific date to celebrate the new vintage. The third Thursday in November, called “Beaujolais Day,” marks the release of the first wine of the year’s vintage. This red wine, called Beaujolais nouveau, is produced in the French sub-region of Burgundy called Beaujolais from the Gamay grape. Although Beaujolais as a region produces several examples of traditionally-produced wines from ten communes called “Crus,” the most universally-recognized production is Beaujolais nouveau, a vin de premeur. With its annual release occurring the same week as American Thanksgiving, it is a common go-to pairing that is perfect alongside roast turkey and cranberry sauce. 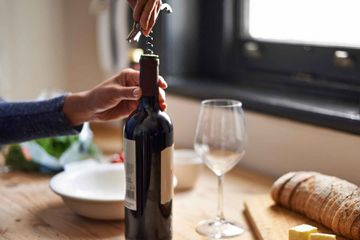 As a region, Beaujolais has always produced a young, vibrant wine to celebrate the culmination of harvest, though up until World War II, it was only available locally in Beaujolais. Originally only allowed to be sold after December 15, the release date rules were changed by the Union Interprofessionnelle des Vins du Beaujolais (UIVB) in 1951 to officially name this annually-produced style “Beaujolais nouveau” and to advance the date of release to November 15. Wineries began to compete to market their wines as the first release of the vintage and raced to get their bottles on store shelves first. The wine producers noticed the French consumer’s somewhat cult-like search to find and consume the first Beaujolais nouveau and realized this early release gave them quick and reliable cash to age the traditionally-styled wines and to move some of their more entry-level fruit. By the 1970s this annual competition to sell the first bottles of the new vintage gained media and marketing attention, and by the 1980s, Beaujolais nouveau enthusiasm spread to Europe. In order to capitalize on this increased exposure, Beaujolais amended the rules yet again to reflect a new, current release date of the third Thursday in November to capture large weekend sales. By the end of the 1980s the phenomenon finally reached the Americas and by the early 1990s, the love of Beaujolais nouveau eventually swept to Asia.

Though Beaujolais is considered part of the overall Burgundy region of France, this AOC observes slightly different rules and traditions than the rest of Burgundy. Namely, the region produces red wines based on the Gamay grape and employs a wine production method called carbonic maceration. In carbonic maceration, whole grapes are left uncrushed and put into sealed containers away from oxygen and allowed to spontaneously ferment. The grapes themselves begin to ferment from the inside out, releasing their juice and naturally-occurring carbon dioxide which protects the fermenting wine from oxidation. Consequently, the flavors produced in wine made using this method are distinct and usually involve an element of juicy, fruit-forward grapiness that may on occasion verge on bubble-gum or grape flavored candy.

These wines are bottled extremely young, and are therefore generally simple, juicy, fruit-forward wines with a lower alcohol content making them extremely quaffable for an array of palates and alongside several dishes. The young nature of this wine style combined with its curious production method make this red a perfect candidate for a slight chill before serving. The light-hearted and uncomplex nature of this wine’s profile makes it perfect to enjoy alongside holiday meals featuring a diverse collection of flavors and the wine’s young and vibrant fruity profile makes it an approachable choice for a smattering of different wine drinkers, no matter their level of experience. One thing is ubiquitous: when it comes to pouring and enjoying Beaujolais, the setting should be cheerful and the number of bottles bountiful!

This year, pick up one of the following Beaujolais nouveau bottles from these notable producers to have alongside your Thanksgiving meal.

This winemaking family began by producing wines in the nearby Maconnais region for over four centuries. Georges officially established the Georges Duboeuf label in Beaujolais in 1954 and went on to become a household name nearly synonymous with Beaujolais.

A property owned and represented by the Louis Latour domaine of Burgundy, Henri Fessy is most known for its production of high-quality Cru and Villages level wines, making the bones of this nouveau style simply stunning.

The product of the classic Burgundy producer Joseph Drouhin based in Beaune, these grapes are sustainably farmed using biodynamic and biological principles. The winery sources grapes from seven of the ten Crus, giving this wine structure and nuance.

This winery embraces the cheerful, market-driven history that made Beaujolais nouveau the cult sensation sought for around the world. The Beaujolais nouveau labels are as fresh, cheeky, and light-hearted as the wine in the bottle making it a hit at parties and holiday gatherings.

This father-son team is a rarity in Beaujolais as they source only from vineyard sites that they own, making this Beaujolais nouveau an estate production. The vineyards are sustainably farmed and are located at one of the highest altitude areas of Beaujolais, giving these wines nuance, complexity, and minerality alongside the juicy, almost effervescent profile.

Beaujolais nouveau represents the earliest and youngest style of wine produced in the Beaujolais subregion of Burgundy, but the wine produces several other styles and quality levels for those interested in experiencing the nuance of the Gamay grape.


Beaujolais-Villages may be produced from any one or several of the ten named Beaujolais communes called “Crus.” Each Cru is named for the major town representing the region and the vineyard area. This style offers an overall profile of the entire region, but sees more oak aging and bottle-aging before release, giving drinkers a more in-depth look at traditionally-produced and released Beaujolais.


Cru Beaujolais is produced from any one of the ten Cru regions of Beaujolais, but unlike the Beaujolais-villages, it may not be blended with any grapes or wine from another Cru. As such, the names most often seen on the labels for Cru Beaujolais are the names of the Crus themselves. These communes listed from north to south are: Sant-Amour, Juliénas, Chenas, Moulin-À-Vent, Fleurie, Chiroubles, Morgon, Régnié, Brouilly, and Côte-de-Brouilly. Each Cru has its own distinct terroir and flavor profile showcasing the several different personalities of the Gamay grape.