In use since the first beers were brewed, beer adjuncts include unmalted grains, fruits, herbs, spices, and added sugars. Essentially, an adjunct is any ingredient added to the basic beer recipe of malt, hops, yeast, and water. Some adjuncts, such as chocolate, coffee, and pumpkin spice, give the beer a distinct flavor, and fruits or bacteria are commonly used to make sour beers. Others change the mouthfeel or help a brewer cut costs, and many craft and homebrewers enjoy experimenting with very unusual ingredients to create truly unique brews.

What Are Beer Adjuncts?

The standard definition of adjunct is "something joined or added to another thing but not essentially a part of it." To understand what an adjunct is in beer and brewing, you must understand what is essential to beer. Then, everything else that finds its way into the brew pot is an adjunct.

There are four essential ingredients in beer: malted barley, water, yeast, and hops. Malted barley provides sugar that the yeast converts to alcohol and contributes color, flavor, aroma, and a sweet taste to the final product. Hops add flavor, aroma, and a bitter balance to the sweet malt. Lastly, water acts as a medium for the others. Each ingredient plays a vital role in brewing, and if you take away any one of them, you have something that is not beer.

The role of adjuncts is to enhance characteristics that the four essentials contribute to beer. They can be added at any point during the brewing process, from the wort to fermentation to just before bottling, and left whole or infused in the tank, similar to a giant teabag. Some adjuncts increase the original amount of sugar in the wort, and others add a unique flavor or aroma to beer or alter how beer ferments. Many styles of beer rely on adjuncts, though adjunct beer is not a style on its own.

Grains other than malted barley are the most used adjuncts. Brewers use them to increase the original wort sugar content and, therefore, the final amount of alcohol. Adjunct grains also contribute flavor, aroma, and color to beer.

Brewers frequently use unmalted barley, corn, rice, rye, and wheat. Oftentimes associated with American lagers but used worldwide, corn and rice are often viewed as cheap fillers that cut production costs. Beer may also use other grains like cassava, oatmeal, and sorghum.

Sources of pure sugar are typical adjuncts. Brewers have long added honey to the brew pot to increase the final alcohol content. Candied sugar is a common ingredient in Belgian ales, and other beers use caramel, maple syrup, or molasses. Unfermentable sugars, like lactose (the sugar in milk), increase the sweetness of the final beer, most often for milk stouts.

Popularly found in porters and stouts, chocolate and vanilla adjuncts blend nicely with the natural flavors of dark beer. They're both like drinking dessert.

Often brewed with cacao beans, chocolate beer may also get its flavor from unsweetened ground cocoa, while homebrewers may turn to baker's chocolate or even chocolate bars, chips, or syrup. Vanilla flavoring can be added with whole vanilla beans or an extract.

Coffee is also a popular adjunct that combines well with stout and porter's dark, roasted flavors. Tea is occasionally added to beer, although it's not as common. Either may be added as a brewed concentrate or steeped directly in the wort or fermentation tank.

Fruit is perhaps the easiest adjunct to identify and understand. Fruit contributes flavor, aroma, color, and additional sugar, which usually means more alcohol. From grapes to apples and raspberries to pumpkins, every fruit has found its way into the brew pot at some point. Fruit beers are extremely popular and diverse, spanning nearly every beer style, including Belgian lambics, lagers, sours, and wheat beers.

Vegetables are used occasionally, though not as frequently as fruit. Hot peppers are probably the most common veggie adjunct that you'll come across. The heat from a chile pepper changes beer's typical sweet-bitter balance into a sweet-hot balance that's quite interesting.

You have encountered a spice adjunct if you've tried a wit or Belgian white beer. The beer style uses coriander in the recipe for a distinct, if subtle, aroma and flavor. Warming spices are common in autumn and winter seasonal beers as well. Though not all contain real pumpkin, pumpkin beer usually includes pie spices like allspice, ginger, and nutmeg.

While brewer's yeast is usually the only microorganism allowed in the fermentation tank, brewers will sometimes deliberately infect their brew with certain types of bacteria. These alter how the beer ferments, contributing some very unusual flavors that tend to be distinctly sour.

While the other adjuncts are fairly typical, creative brewers will add just about anything to their beers. It's especially prevalent among craft breweries that like to push the boundaries of what is "normal" while grabbing some attention in a highly competitive market.

Mushrooms are popular adjuncts, and brewers use a combination of fruits and herbs to create beers that taste like a bloody Mary or pizza. On the more unusual front, you'll find beer made with seafood (e.g., oysters, shrimp, and squid ink) or seaweed and beer with Rocky Mountain oysters, which are definitely not aquatic. Cake-flavored and doughnut beers can be found, and there are even beers brewed with animal brains and yeast cultivated in the brewer's beard.

The Saison Style Offers Some Exciting Farmhouse Ales
Article Sources
The Spruce Eats uses only high-quality sources, including peer-reviewed studies, to support the facts within our articles. Read our editorial process to learn more about how we fact-check and keep our content accurate, reliable, and trustworthy. 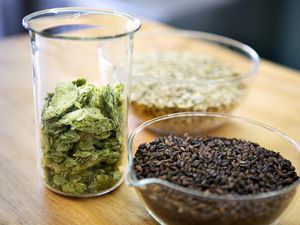 Is There a Most Important Ingredient in Beer?