From budget-friendly to top-shelf bottles

Samuel Langhorne Clemens, also known as Mark Twain, famously said, “If I cannot drink bourbon and smoke cigars in heaven, then I shall not go.” Of course, it would be nearly impossible to argue with the late writer on this or any other subject, and why would you want to? Bourbon is liquid sunshine, and like Twain, the spirit is an American classic.

In fact, to be called bourbon, it has to be made in the United States. There are a few other rules as well—distilled from at least 51 percent corn, aged in new oak barrels, and bottled at no less than 80 proof. While Americans have been drinking whiskey aged in charred barrels since the 1820s (give or take), demand for the brown spirit has recently rocketed.

To keep pace, bourbon production has jumped over 360 percent since 2000, according to the Kentucky Distillers Association. In fact, there’s so much new juice on the shelves of your local shop, it can be hard to keep up with new producers and bottlings. Certainly, some of the old stalwarts can be hard to find or are sold at a hefty markup, but whiskey drinkers still enjoy an embarrassment of riches.

Here are the best bourbons that won’t disappoint. Because too much good bourbon is barely enough. 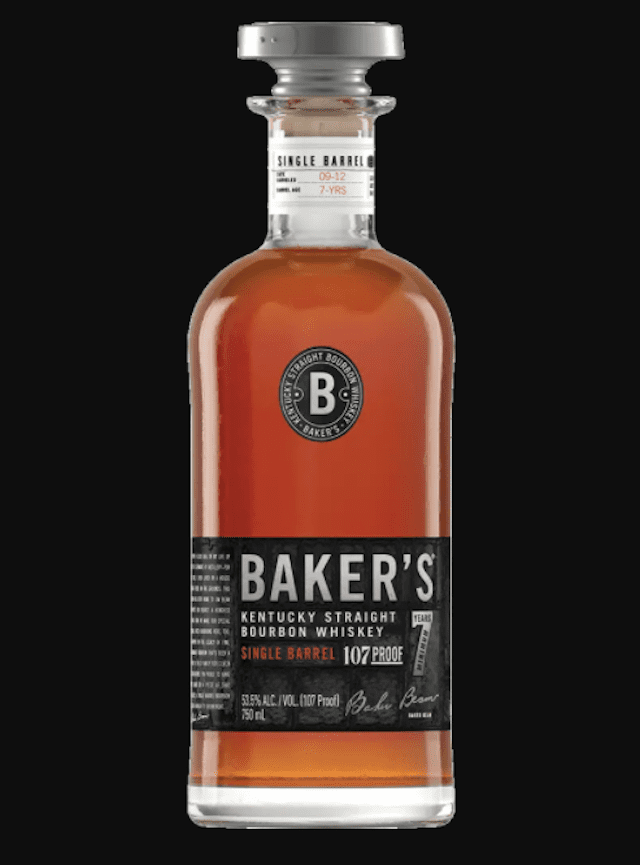 The folks at Jim Beam recently re-imagined the Baker’s label as a single barrel offering, and while the original 107 proof was excellent, the new version is simply fabulous. Named for distiller Baker Beam, the whiskey is still aged for seven years. The proof remains the same, but now every batch varies from barrel to barrel, and the label lets you know not just which cask you’re drinking but also where the spirit aged in the warehouse—down to the floor and rack. This makes for a cool sensory experience if you can grab two different bottlings to sip side by side and suss out the differences. 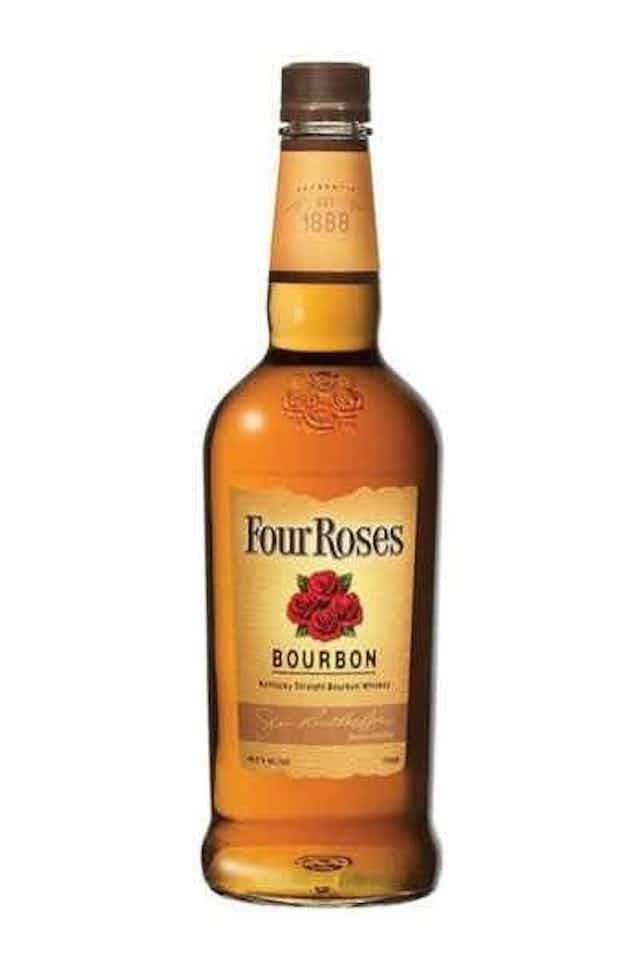 Whether you can’t or just don’t want to spend a lot on bourbon, but still prefer not to drink “rotgut” whiskey, Four Roses Bourbon is a sure-fire winner. Previously known as Four Roses Yellow Label, it’s a whiskey that you won’t find on the top shelf at your liquor store, but you will see on the rail at a bar where the tender knows his or her game. Master distiller Brent Elliott and company use two different mash bills and five strains of yeast to create spirits which, in the case of this bourbon, are then aged at least five years. The result is a quite approachable drink that's soft and smooth in the mouth and ready for its close-up in a fussy cocktail.

If you want to try cooking with bourbon, a cheaper option is also a good idea. Whiskey in general, and bourbon in particular, is a wonderful way to add flavor in the kitchen and the barbecue pit. You can't go wrong with adding a good amount of bourbon to brisket or ribs. Or, try out a spicy bourbon honey glaze: Take whiskey, honey, brown sugar, apple cider vinegar, salt, and cayenne to a saucepan and simmer until it becomes syrupy. It’s a tasty way to punch up some smoked chicken or grilled salmon.

“When cooking with bourbon I try to avoid 'hot bourbons’ that leave a good burn in the aftertaste. Rather I like a well-crafted, balanced bourbon that has sweet notes like butterscotch and caramel. Blanton’s is my top choice, but it is very costly—another option that is cost-friendly and flavorful is Four Roses.” – Teddy Folkman, Food and Beverage Manager at Timbers Kiawah 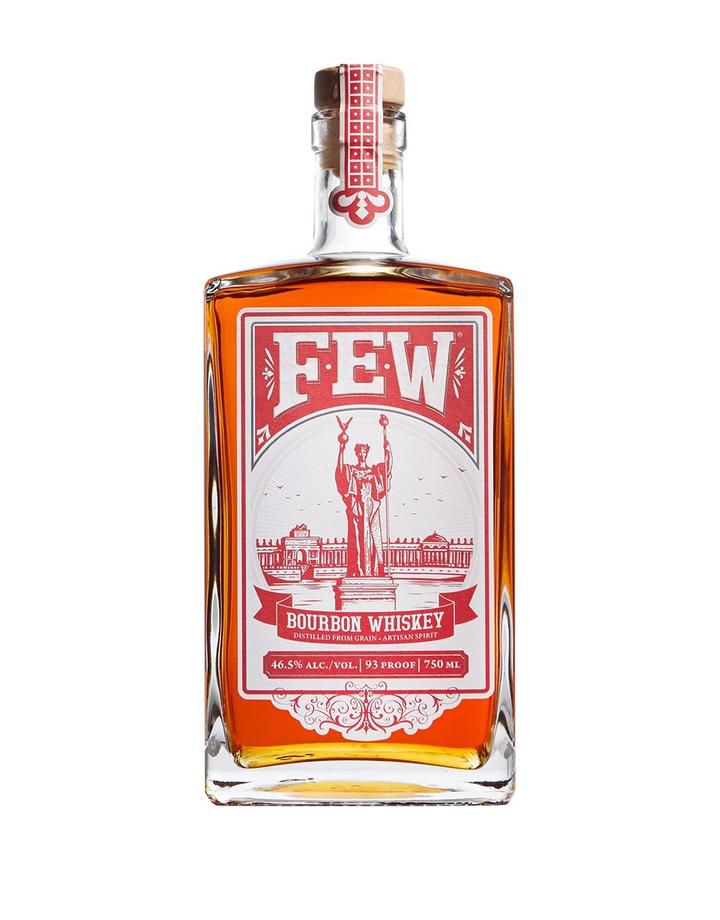 View On Flaviar View On ReserveBar View On Minibar Delivery

It’s a common misconception, but it does not have to be made in Kentucky to be called bourbon. Evanston, Illinois-based FEW Spirits makes a righteous one. Named for the initials of a local teetotaler Frances Elizabeth Willard, who did her best to keep booze out of her Chicago ’burb in the middle-to-late 19th century, the company does the utmost to source its ingredients locally.

FEW uses a good portion of rye in its mash bill, which gives every glass tangy and lingering spicy notes as well as a herbaceous undercurrent that swirls around an ambrosial butterscotch sweetness. 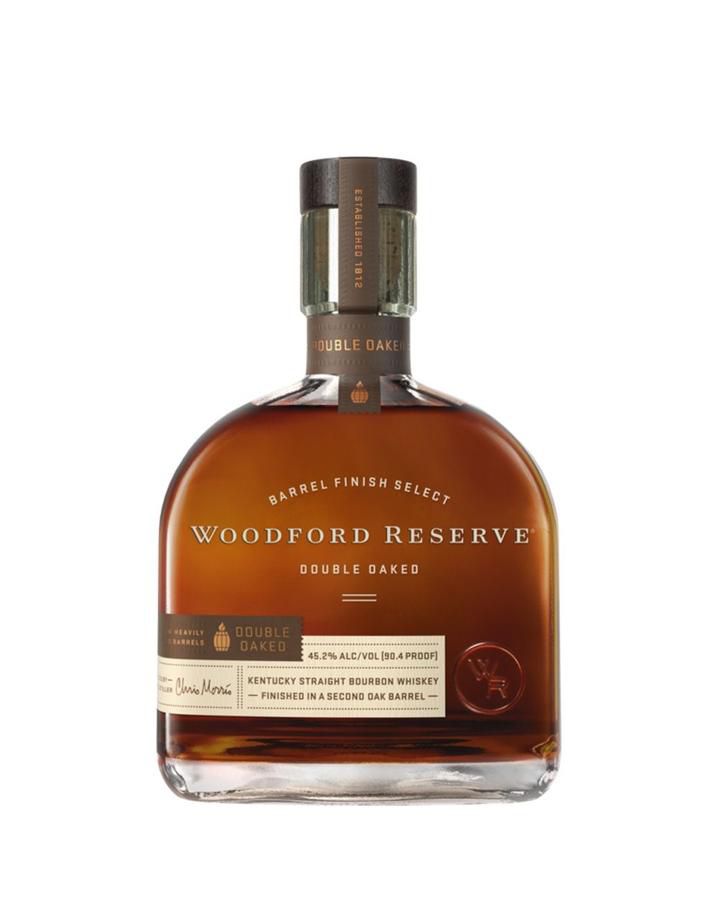 The aging process is how bourbon is imbued with much of its flavor, and by definition, bourbon must be aged in new charred American oak. As its name would suggest, Woodford Reserve Double Oaked is aged in two different barrels, first in one seasoned outdoors for nine months and totally toasted and charred.

The whiskey then does another stint in a new barrel lightly charred and toasted twice as long as the first. Of course, Woodford wouldn’t go to this level of fuss if the results weren’t a deeply flavorful whiskey. Caramel, succulent apple, nuts, and spice lead the mouth to a finish that saunters up and around the tastebuds for at least twice as long.

When you are experimenting, there are some good rules of thumb, according to Teddy Folkman, food and beverage manager at Timbers Kiawah. “The majority of the time in savory cooking you want to burn off the alcohol so that all you have is the flavor profile of the spirit, wine, or beer provided,” he says. “Not only do you want to burn off the alcohol, but in some preparations, you want to reduce it as well.” On the other hand, dessert is a little different: “You want to leave it boozy typically in raw and sweet dishes,” Folkman says. 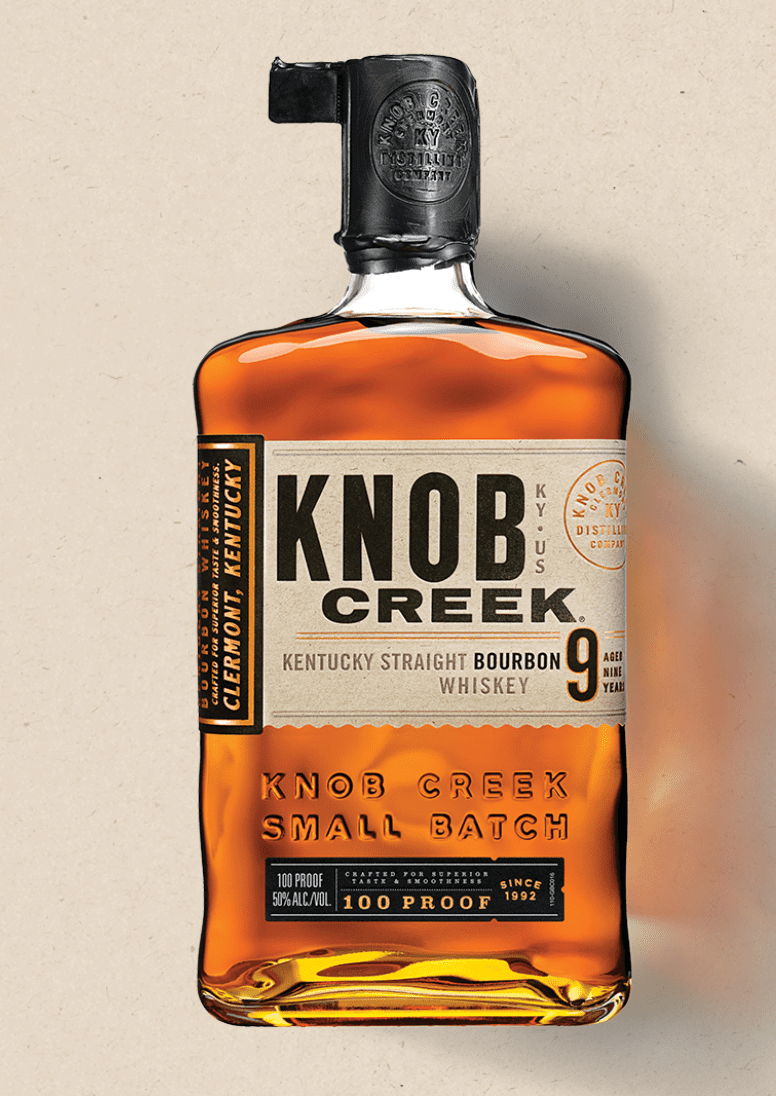 In the early '90s, legendary Jim Beam master distiller Booker Noe created and introduced Knob Creek, one of the first “small batch” bourbons to make it to market. Now a juggernaut, the label is an icon easily found behind most bars. Accessible and consistent, it’s great for sipping but also stands out as an anchor in a classic bourbon Old Fashioned.

Aged nine years in American oak, Knob Creek Bourbon is bottled at 100 proof, so its flavor can withstand a decent portion of ice. It’s a robust whiskey teeming with big notes of vanilla and caramel sweetness that works off the bitterness of the Angostura and pairs perfectly with the syrupy sweetness of the Luxardo maraschino cherry.

How to Mix Bourbon

A drop of water or perhaps an ice cube are our mixers of choice, but you can mix bourbon with whatever you like. The world is pretty much your oyster here. Cola is a classic choice. Some drinkers like club soda for simplicity, and for a summer refresher, you can spike an Arnold Palmer—a 50/50 mix of lemonade and iced tea with a good pour of bourbon.

From a cocktail perspective, bourbon makes an excellent and versatile base. Old Fashioneds, Manhattans, sidecars, and mint juleps are all glasses full of perfection, and a bourbon milk punch is a fun way to drink your dessert. But, feel free to experiment creatively. 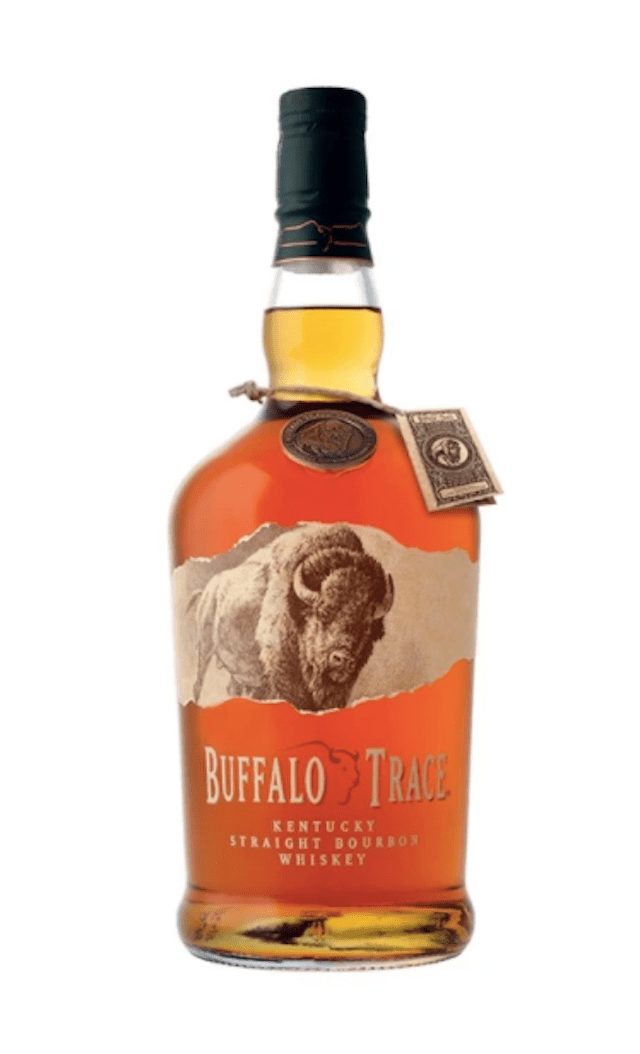 Every drinker is different. So why one falls in love with a particular spirit is a unique and individual experience. That said, for a newbie who wants to experiment with bourbon, Buffalo Trace is a good, strong introduction. It’s produced at one of the oldest distilleries in the country and is a classic expression full of archetypical and pronounced flavors—fruit, caramel, vanilla, and wood. Versatile and flavorful, it’s rich enough for sipping and bold enough to showcase in cocktails, but it still marries well with other ingredients. 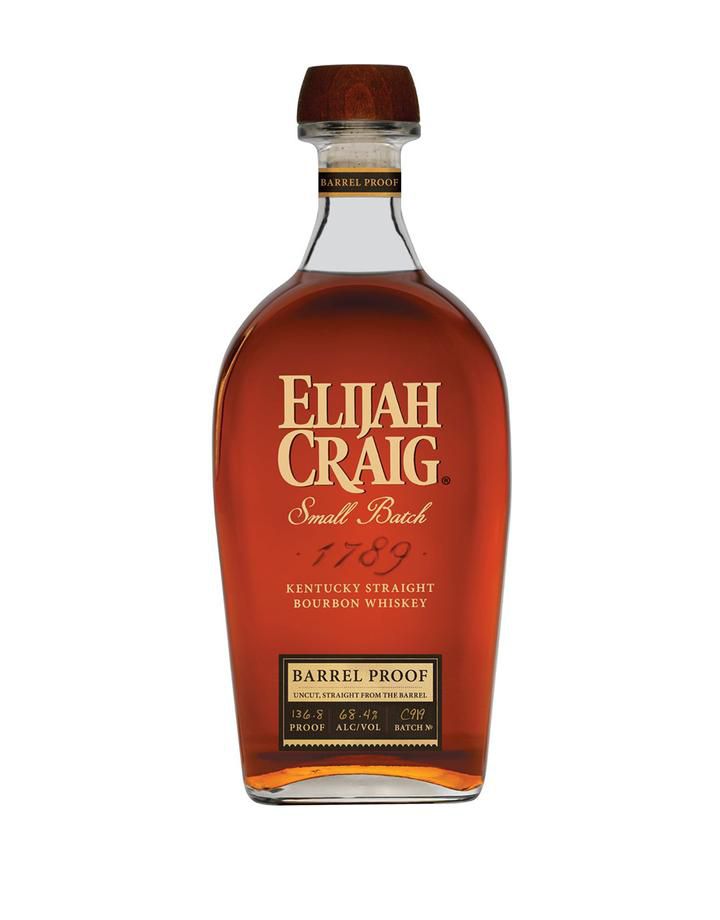 If you’re the kind of whiskey drinker who wants to feel a glass not just on the taste buds but deep in the liver, Elijah Craig Barrel Proof is your called shot. This bourbon is delicious and, depending on the barrel, registers between 128 and 140 proof. That’s not just high-octane, that’s rocket fuel. So obviously, this whiskey can run a bit hot. While some may take it neat, there’s no shame in adding a small ice cube or a splash of water so you can appreciate the robust caramel, vanilla, cinnamon spice, and chocolate that make this a truly excellent bourbon without melting your palate. 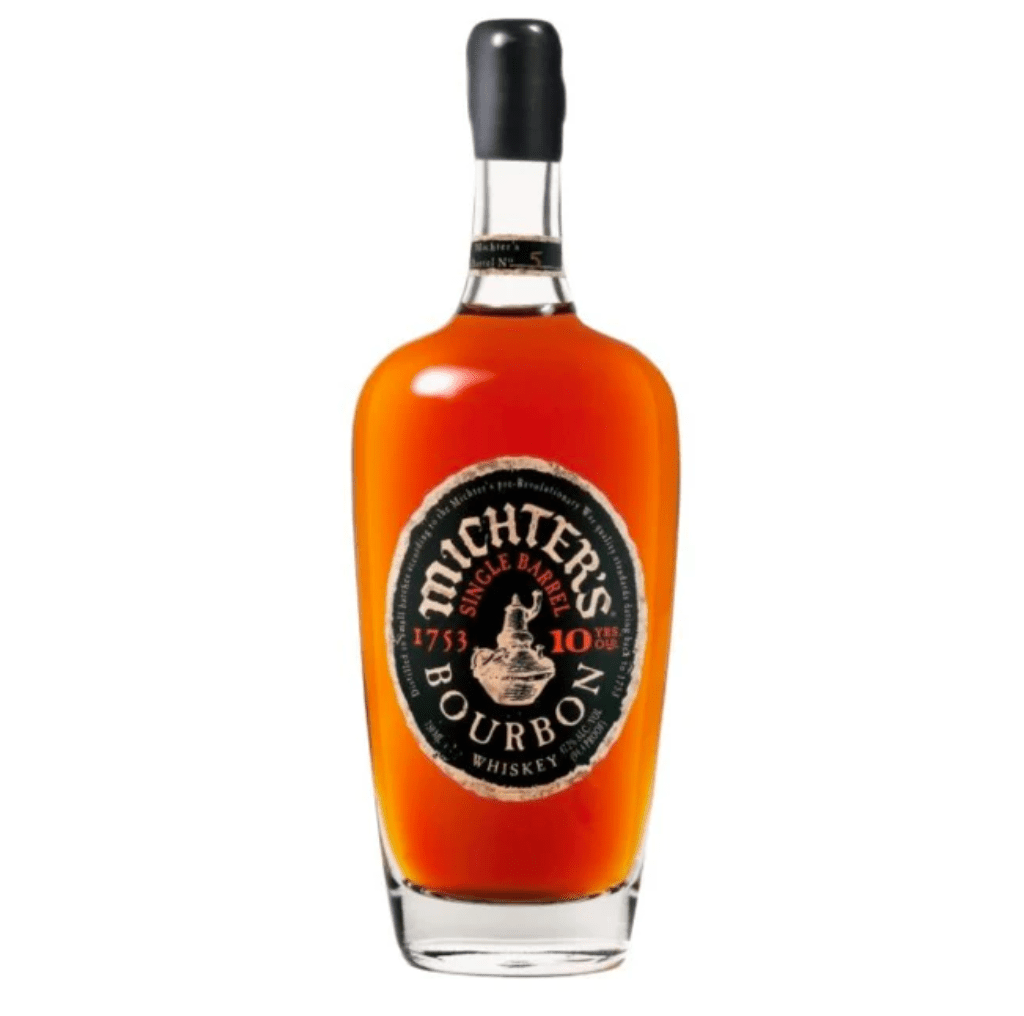 There are quite a few “top-shelf” bourbons that are incredibly hard to find and not worth the seven figures over the retail price that collectors are shelling out for them. But thankfully, you can still get your hands on Michter’s 10 Year Single Barrel Kentucky Straight Bourbon. There’s just so much to love about this yearly release. It’s always a stunner! Toffee, maple, and vanilla buttressed by a substantial dose of char and wood make it a gorgeous mouthful with nuances to discover as you savor each glass.

Stock Your Bar With the Best Bar Tools According to Mixologists

What to Look for When Buying Bourbon

This may seem obvious, but different bourbons are made with different ingredients. Yes, bourbon must be distilled from 51 percent corn, but brands can use that other 49 percent to tinker with flavor. Some use a higher ratio of corn for a sweeter profile, others go big on rye to give their whiskey additional spicy notes, and a decent portion of wheat in the mash gives expressions a nutty quality.

Time sleeping in wood gives bourbon flavors that don’t emanate from the distillation process. The longer the liquid spends aging, the more impact the wood has on the resulting whiskey. But to be called bourbon, there is no requirement for time in the barrel. To be called "straight bourbon" the expression must be two years old. If the whiskey is under four years the bottle must carry an age statement. So, if a bourbon carries no age statement, you know each component used in the blending spent at least four years in a barrel.

When buying bourbons, you’ll want to be on the lookout for words like "cask strength," "bottled in bond," and "single barrel." Most whiskey expressions have some water added to them before bottling to achieve the desired proof (alcohol by volume). Ones that don’t are known as cask strength as they go into the bottle at the same ABV they come out of the barrel.

A "bottled in bond" label requires the whiskey to have been aged a minimum of four years in a supervised (bonded) warehouse, come from barrels filled by a single maker in a single season, and be bottled at 100 proof.

Most bourbons are blended by mixing whiskey from different barrels together to achieve a particular flavor profile. A single barrel expression goes unblended, so tasting notes will differ from barrel to barrel.

Yes, all bourbon is whiskey, but not all whiskey is bourbon. Bourbon must be distilled from at least 51 percent corn, aged in new charred oak barrels, and bottled without artificial colorings or flavorings.

What is bourbon made from?

Bourbon is made from a mash bill of grains that must include 51 percent corn, water, and yeast. The combination is then distilled, aged, and bottled.

How many calories are in a shot of bourbon?

A typical 1.5-ounce glass of 80 proof bourbon is around 100 calories. But as the proof goes up so does the calorie count

How much sugar is in bourbon?

There are 0 grams of sugar in a pour of bourbon.