Have you discovered the beauty of cachaça yet? The Brazilian spirit is a lot like rum, but it is not rum (any cachaça fan will be sure to remind you of that) because it begins with pure sugar cane rather than molasses, and the difference is noticeable.

Cachaça (pronounced kah-SHAH-sah) is taking over liquor shelves across the world. It is everything that's great about rum, yet there's something magical about it. The taste often begins with a rum sweetness, and from there it can explode into a whole host of amazing flavors—from a chemical-oil in the more industrial brands to beautiful fruits and spices in artisan aged cachaças.

If cachaça is known for one cocktail, it is the caipirinha (Brazil's national drink). It's a perfect introduction to the spirit and unbelievably simple—lime, sugar, cachaça. The caipirinha is to cachaça what the mint julep is to bourbon: you can use it to explore and compare brands, and it's the perfect recipe for personal adaptations.

Top Cachaças Available in the U.S.

The amount of cachaça produced in Brazil is astounding. Dragos Axinte, CEO of Novo Fogo Cachaça, notes that there are over 50,000 cachaça distilleries in Brazil. Most are illegal, however, and he estimated that (in 2016) there were about 3,000 legal brands.

Not all of those cachaças make it to the international market. This is quickly changing as more drinkers discover the spirit. The selection available in the U.S. is also growing, and you can enjoy some of the best cachaças being distilled today.

Here are a few of the hottest brands that you'll want to check out, but don't stop here! The world of cachaça is vast, and it is a ton of fun to explore. Grab a bottle, mix up a caipirinha, and enjoy. Saude! 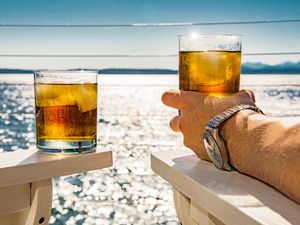