Traditional favorites and international variations of a holiday classic 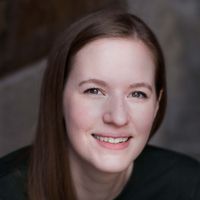 Jenny Kellerhals is a freelance writer covering food and beverage. She is also a pastry chef and an active recipe developer with more than a decade in the industry.

As soon as the holiday decorations go up and "A Christmas Story" starts playing on repeat on TV, you know the fruitcake is soon to follow. Every fruitcake is unique to the baker making it, and everyone has their preference for the kinds of fruit, level of spiciness, overall crumb, and addition of alcohol that make for the perfect fruitcake. But, a few ingredients are consistent in almost every recipe.

There likely will be brightly colored jellied fruit. Embrace it. Most of the time, fruitcakes include cherries, dried fruit, pineapple, raisins, and candied citrus. In the United States, most fruitcakes are also made with pecans, as pecans are native to the South. Not surprisingly, the fruitcake tradition is strongest in the South and throughout Texas. Cakes made with less fruit or at times of the year other than the holidays are often called "pecan cakes" instead of fruitcakes. The cakes are typically decorated with more fruit and nuts and generally don't need icing.

If you've never had a fruitcake before, visions of dense, dry, or cloyingly sweet cakes might come to mind. But the good ones should never be dry or dense enough to throw like a rock. The best fruitcakes are just as moist and flavorful as your favorite banana bread. With traditional fruitcakes available from all over the world, there's bound to be one you enjoy.

Whether you're an enthusiast or testing the waters for the first time, here's a roundup of the best fruitcake options available for delivery this holiday season.

Our Top Picks
Best Overall:
Eilenberger's Bakery World Famous Fruitcake at Goldbelly.com
It arrives in a custom cake tin, illustrated with a classic Eilenberger's vignette.
Read Review
Runner-Up, Best Overall:
The Nuns of New Skete Brandied Fruitcake at Goldbelly.com
While maybe not as flashy as others, the nuns' fruitcake is known for its exceptional moistness and traditional ingredients.
Read Review
Best Small Bites:
Collin Street Bakery DeLuxe Petites at Amazon
These fruitcake bites are stuffed with pineapple, papaya, and pecans and topped with a maraschino cherry.
Read Review
Best Splurge Gift:
Harry & David Christmas Gift Basket with Wine at Harry & David
This gift basket from Harry & David has got everything you need to please every palate on the list.
Read Review
Best Loaf:
Gladys' Bakery Czech Pecan Fruitcake Loaf at Goldbelly.com
It's also baked as a decorative round cake in multiple sizes—as well as ones uniquely shaped like the state of Texas.
Read Review
Best Organic Fruit:
Frog Hollow Farm Holiday Fruitcake at Froghollow.com
This fruitcake is filled with Frog Hollow's own organic dried plums and peaches, candied orange peel, and walnuts.
Read Review
Best Stollen:
Williams Sonoma Dresden Stollen at Williams-Sonoma
Unlike American fruitcakes, the stollen is a yeast-leavened sweet dough that's studded with rum-soaked dried fruits and nuts.
Read Review
Best Gluten-Free:
Marilyn's Gluten Free Gourmet Fruit Cake at Amazon
Reviewers agree that the flavors are nicely balanced, and the cake is satisfyingly moist.
Read Review
Best Panettone:
From Roy Chocolate Panettone at Thisisfromroy.com
It's prepared several months before the Christmas season starts and baked in large muffin-like loaves.
Read Review
Best Cookies:
Mary of Puddin Hill Fruit Cake Cookies at Goldbelly.com
Just like the cakes, these cookies are made with cherries, dates, pineapple, and pecans.
Read Review 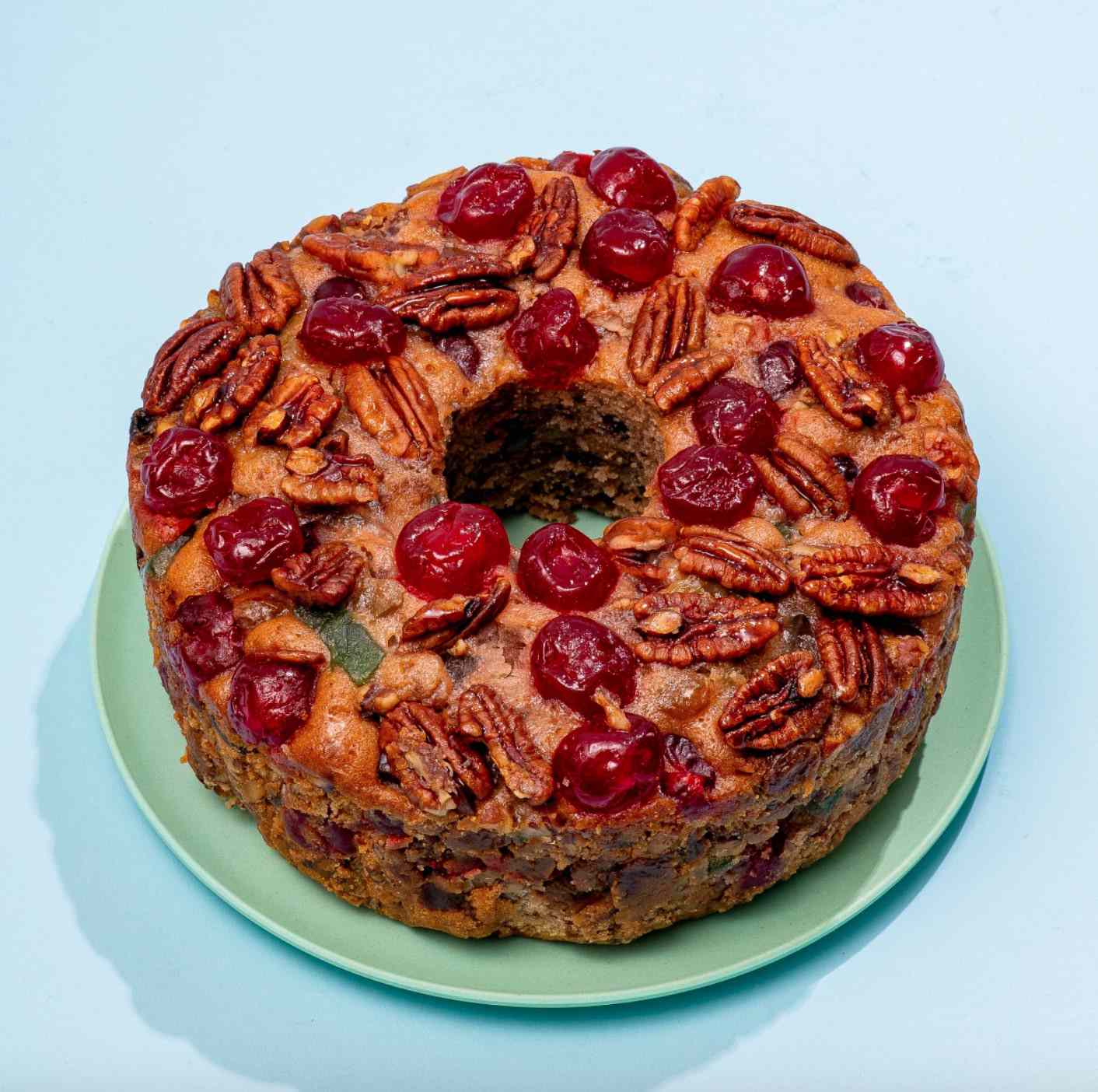 Eilenberger's Bakery, located in Palestine, Texas, claims to be the oldest in the Lone Star state. Its nationally renowned fruitcake is said to be the same recipe that the founder, Fred H. Eilenberger, brought to the states from Germany—and it's still working for them after 120 years in business. This particular fruitcake includes pecans, candied cherries, fresh pineapple, and golden raisins. It also arrives in a custom cake tin, illustrated with a classic Eilenberger's vignette. 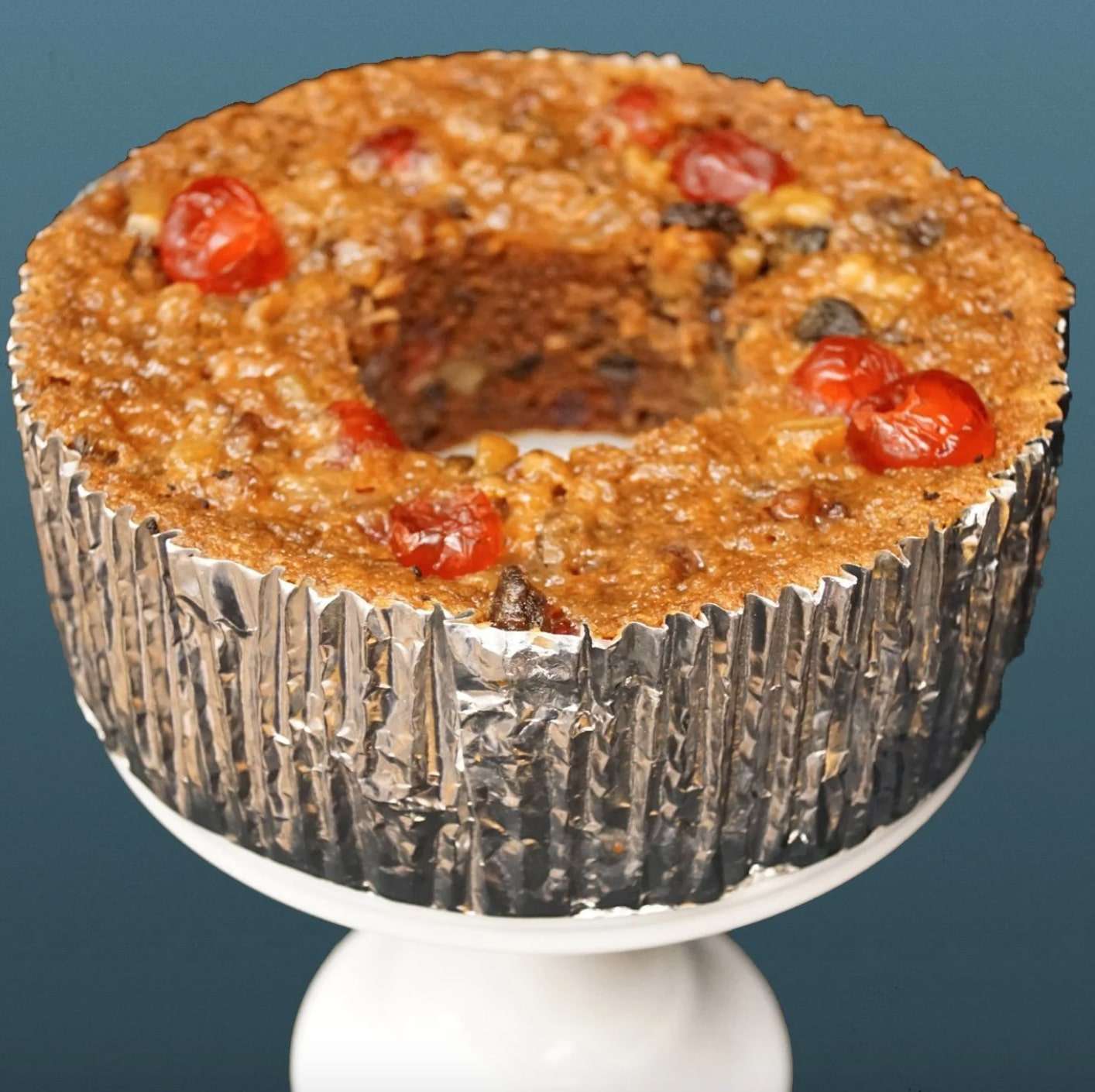 Yes, actual nuns make these fruitcakes. The nuns of the New Skete Monasteries in Cambridge, New York, are famous for their New York cheesecake, but their holiday fruitcakes aren't to be missed either. While maybe not as flashy as the other fruitcakes, the nuns' fruitcake is known for its exceptional moistness and traditional ingredients.

These classic fruitcakes are packed with raisins, pineapple, dates, Seville orange peels, cherries, currants, and walnuts. The cakes have also been baked with brandy for a little extra flavor, without soaking the cake in raw alcohol. 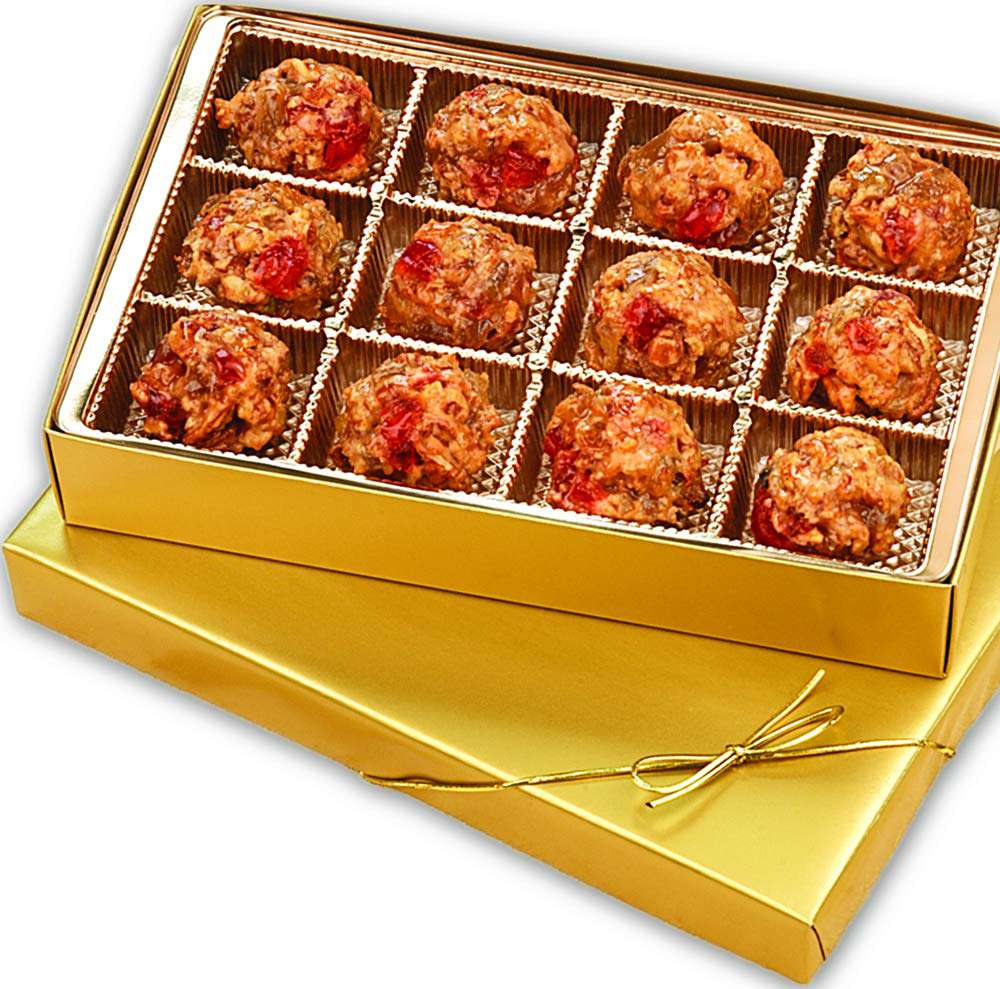 View On Amazon View On Collinstreet.com

If you don't have a whole crowd of people to share several pounds of fruitcake with, consider the fruitcake DeLuxe Petites by Collin Street Bakery. Made with the same ingredients as the larger DeLuxe fruitcake it offers, these fruitcake bites are stuffed with pineapple, papaya, and pecans and topped with a maraschino cherry. If you're just getting started on your fruitcake journey, take it one bite at a time before investing in a whole cake. 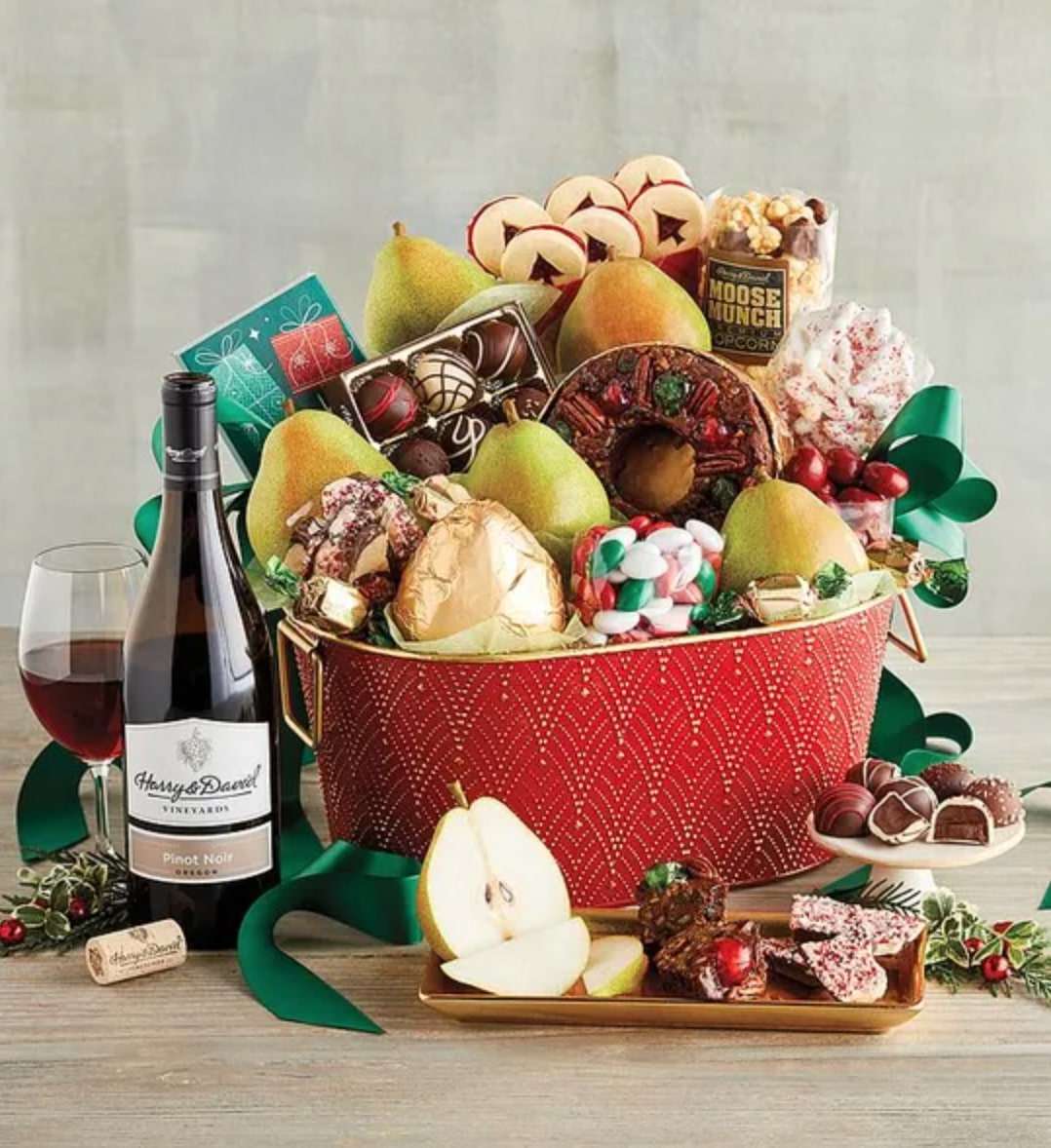 Fruitcake is terrific, but it isn't an incredibly flashy gift. If you're looking for a special edible gift this year that includes a traditional fruitcake but with a little more pizazz, the Christmas Gift Basket with Wine from Harry & David has got everything you need to please every palate on the list.

Along with a 1-pound traditional fruitcake, this gift basket includes chocolate truffles, peppermint bark, and chocolate-dipped cherries. Savory treats include yogurt-covered pretzels, almonds, and popcorn. A bottle of wine for those who prefer their treats in liquid form is an especially nice touch and will pair well with the fruitcake. All of it comes arranged in a beautiful holiday tin. 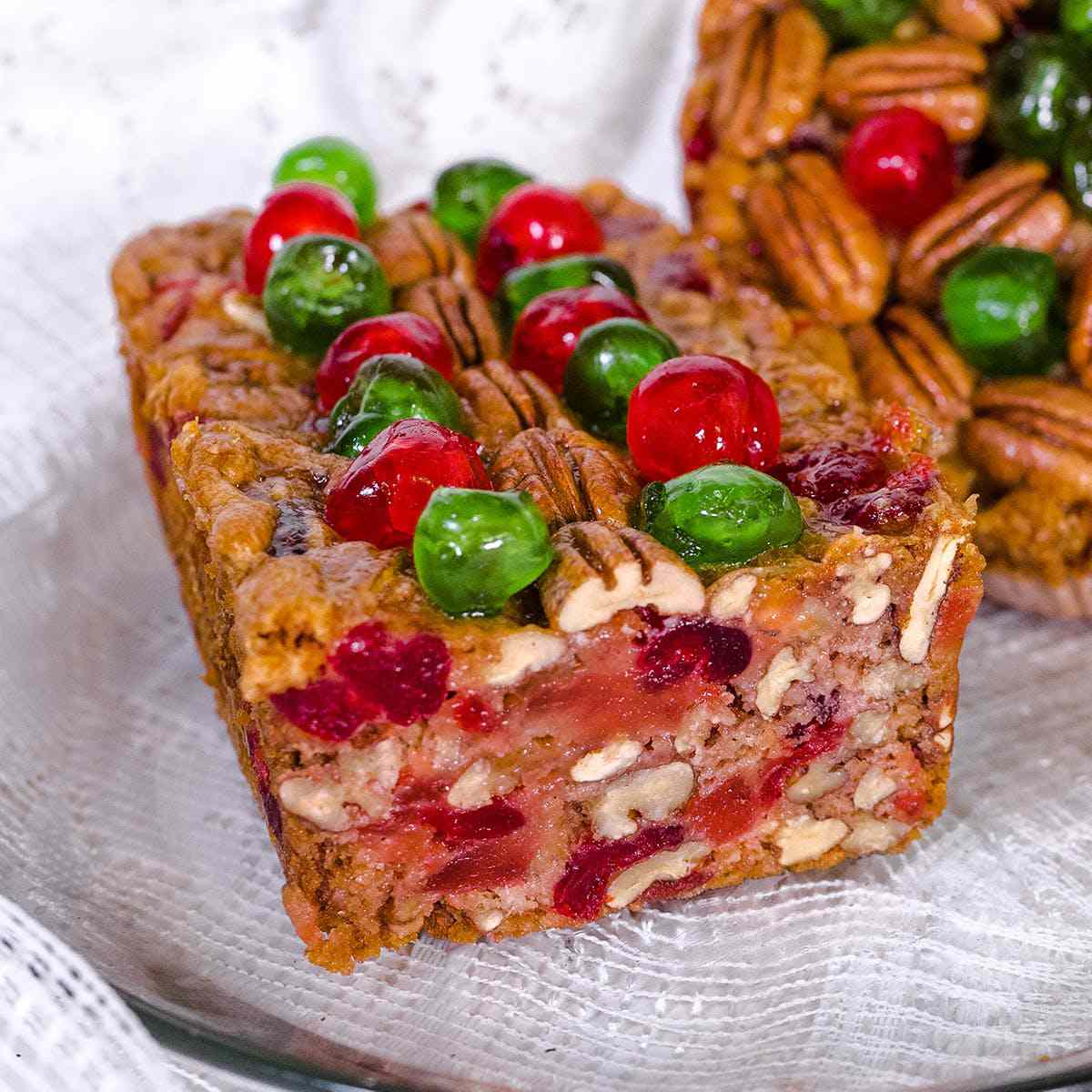 For a beloved fruitcake that's as unfussy as it is nice to look at, Gladys' Bakery Czech Pecan Fruitcake will please just about everyone. Gladys keeps it simple. This is primarily a pecan cake that's been studded with bright red and green candied cherries. And, that's it.

Gladys Farek founded her eponymous Texas bakery in 1972, initially baking as a hobby. Everything changed when she introduced her Czech Pecan Fruitcake, which is now the bakery's main attraction. While the 2-pound loaf comes in a reasonable size to slice and share, it's also baked as a decorative round cake in multiple sizes—as well as fruitcakes shaped like the state of Texas. 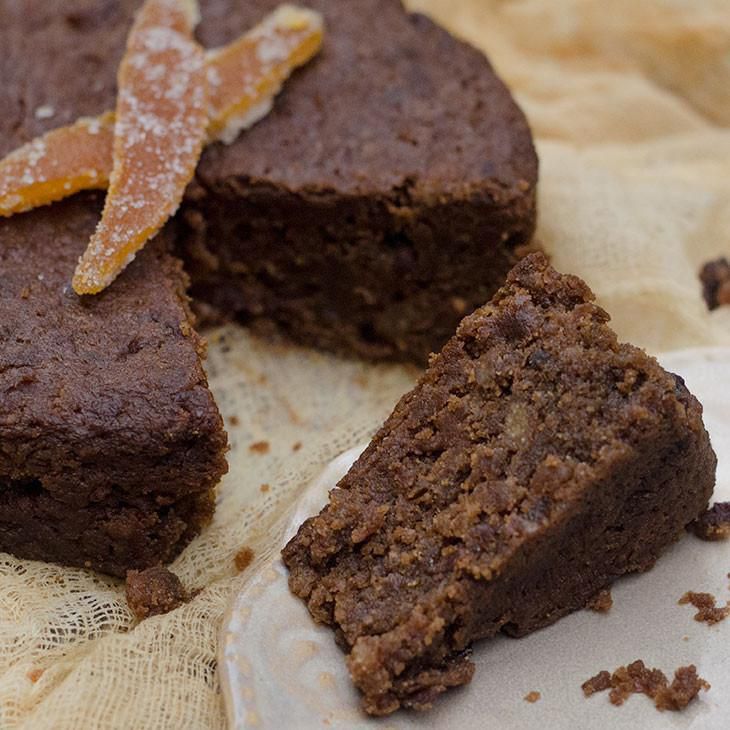 You won't find any brightly colored candied cherries here. This holiday fruitcake is filled with Frog Hollow's own organic dried plums and peaches, candied orange peel, and walnuts. Finally, the cake is soaked in rum for an extra holiday kick. Made almost entirely of organic ingredients, this 5.5-inch fruitcake comes at a premium, but is well worth it for those who want the most naturally delicious fruitcake on the market. 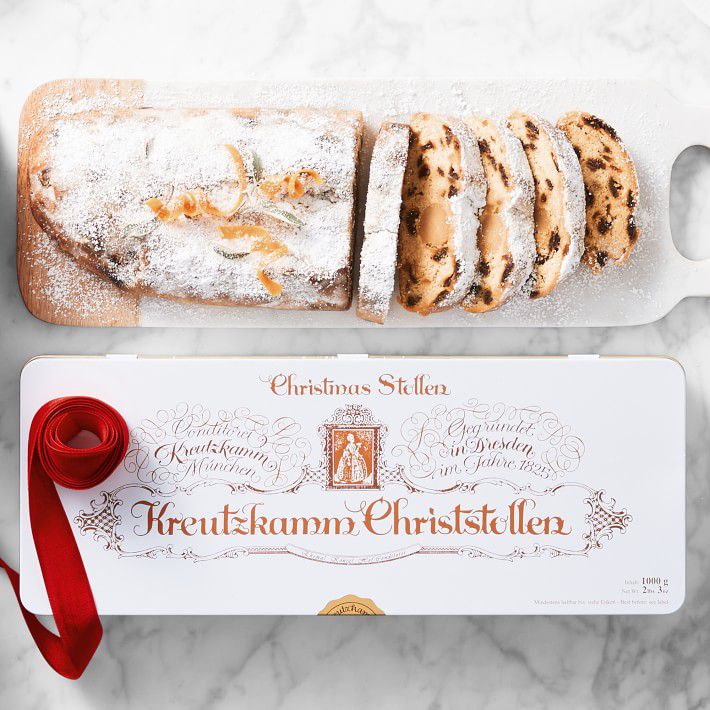 You'll recognize the classic stollen by the powdery white confectioner's sugar that coats this German holiday loaf. Unlike American fruitcakes, the stollen is a yeast-leavened sweet dough that's studded with rum-soaked dried fruits and nuts. The freeform loaf is ultra buttery and served in slices. It is perfectly paired with a mulled wine, warm coffee, or bottle of bubbly. 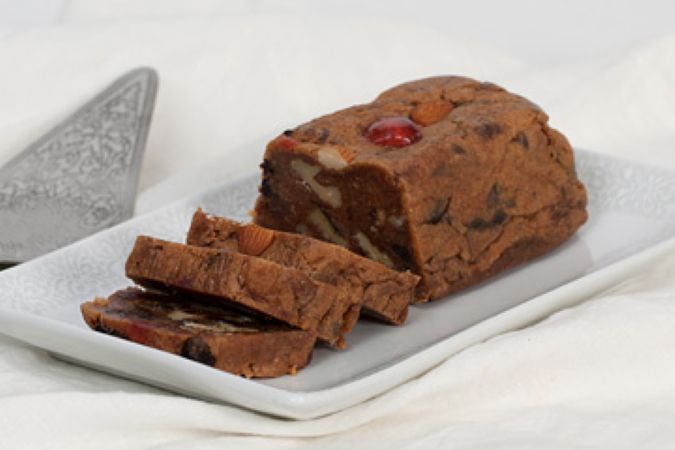 View On Amazon View On Marilynsgourmet.com

If you love fruitcake, but are looking for a gluten-free option, you might not find very many choices—but you don't have to go without. Marilyn's Gluten-Free Gourmet Fruit Cake is highly rated by those who've tried it. While the texture might not resemble a traditional fruitcake exactly, reviewers agree that the flavors are nicely balanced and the cake is satisfyingly moist. The cake arrives in a gift tin for easy giving or safe transportation from the fridge to the couch. 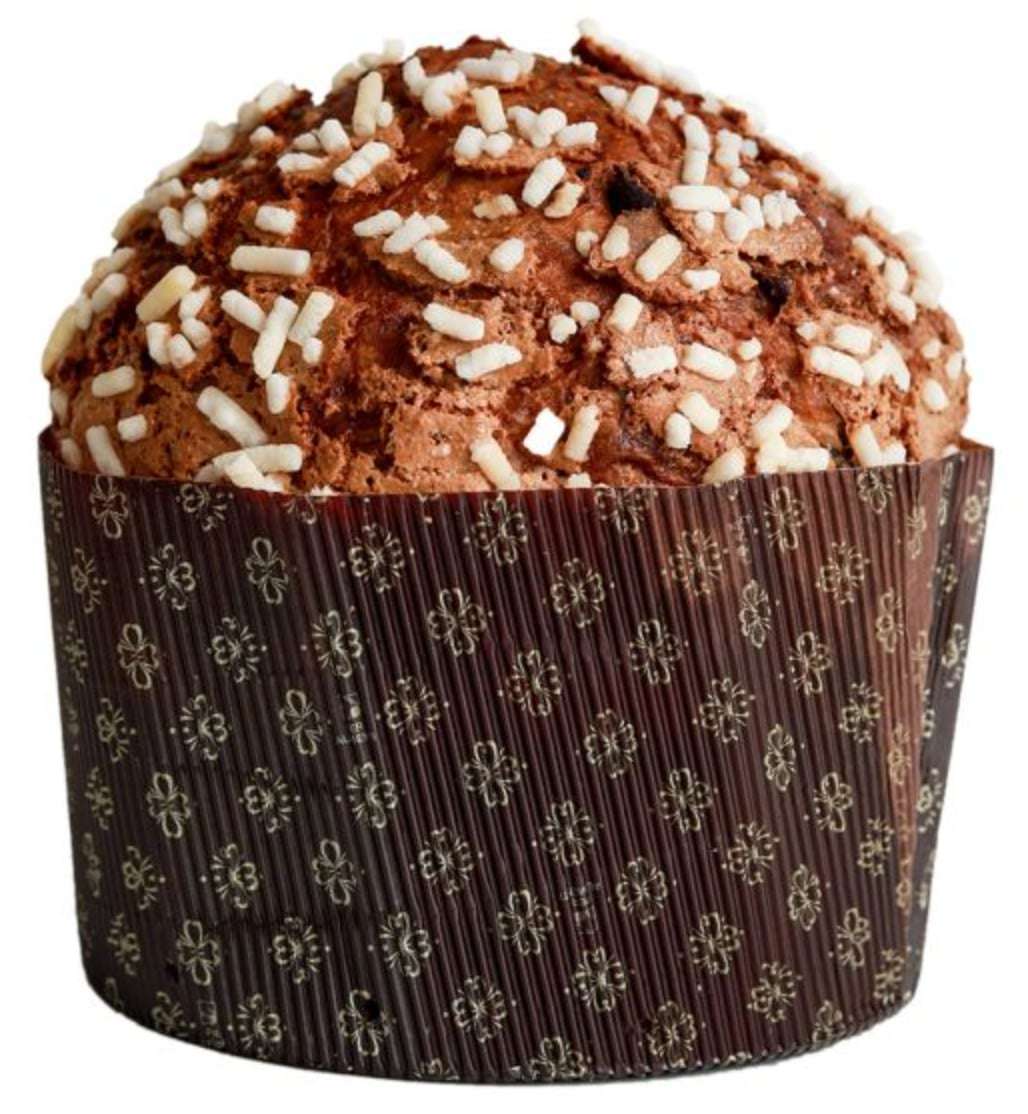 Technically panettone isn't cake. And technically, this panettone doesn't have any fruit in it (although a version with candied orange and raisin is offered and is just as impressive). Classically, panettone is an Italian sweet bread packed with dried fruits, yeast-leavened, and allowed to develop similar to sourdough or a country loaf. It's prepared several months before the Christmas season starts and baked in large muffin-like loaves just in time to share over the holidays.

With over ten years spent developing one of the most popular panettones around, Chef Roy's special pastry is notable for its airy and tender crumb. Large gassy pockets push the dough up and create a lacy sponge that other panettones aspire to. The real magic happens when the panettone is inverted just after baking and left to cool upside-down to prevent those delicate air pockets from collapsing and retaining the pastry's signature perfect dome. 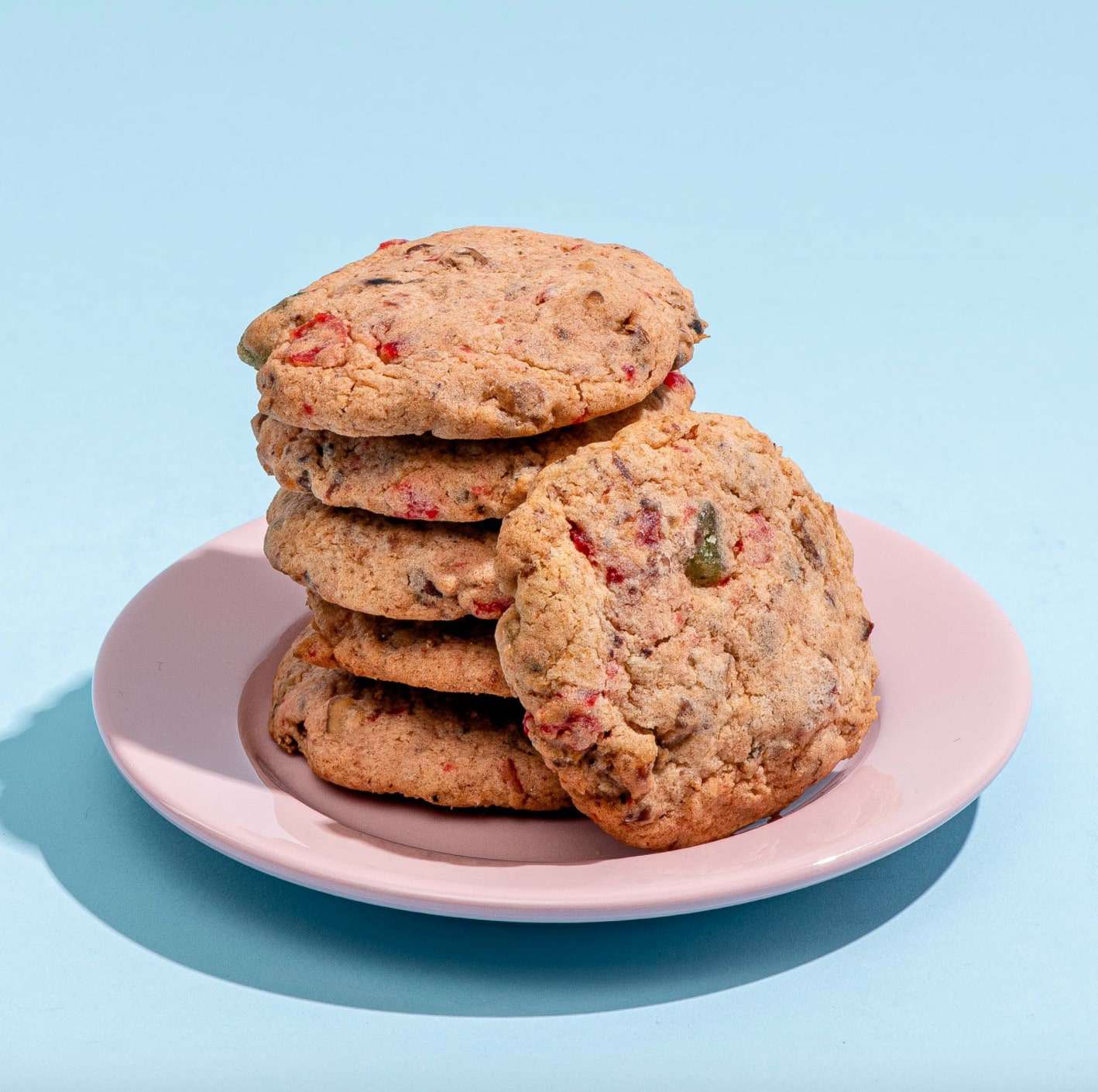 Maybe a cake just isn't your thing. You can still enjoy the festive flavors of fruitcake in cookie form. These fruit cake cookies, by Mary of Puddin Hill, also hail from Texas like so many other popular fruitcakes. Just like the cakes, these cookies are made with cherries, dates, pineapple, and pecans. Each buttery cookie is baked 'til perfectly chewy and lightly golden brown. Much like fruitcakes, these cookies are sold by the pound.

Eilenberger's Bakery World Famous Fruitcake (view at Goldbelly) is going to strike a nice balance for those looking for a tasty traditional fruitcake but don't necessarily want too many flavors fighting for your attention. Want something to really wow? The Harry & David Christmas Gift Basket with Wine (view at Harry & David) is sure to impress anyone you'd like to treat with a complete holiday experience, including the fruitcake.

Jenny Kellerhals has been a professional pastry chef for over a decade in New York City and loves tasting every type of dessert she can lay her hands on—and dissecting how they're made. Based in Queens, she spends most of her time thinking about what she just ate and what she’s going to eat next, with a generous serving of cheese in between.

The 14 Best Gifts for Foodies in 2021
Article Sources
The Spruce Eats uses only high-quality sources, including peer-reviewed studies, to support the facts within our articles. Read our editorial process to learn more about how we fact-check and keep our content accurate, reliable, and trustworthy.
Continue to 5 of 10 below.
Continue to 9 of 10 below.