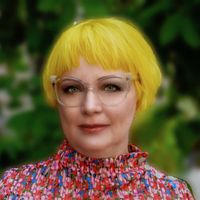 Karen is a freelance writer who covers food and drinks for The Spruce Eats. Her work has appeared in Lucky Peach, Edible Manhattan/Brooklyn/Queens, Chowhound.com, Frenchly, PasteMagazine.com, and more.

The sheer variety of chocolate is nearly endless, from inexpensive candy bars lining the grocery shelves to bonbons crafted by the finest chocolatiers around the world. We can spend a little or we can spend a lot! The Ancient Mayans who first discovered chocolate believed it was a gift from the gods, and ever since then, chocolate—and gourmet chocolates in particular—have earned their reputation as one of the best gifts any person could offer another person.

Here, we've rounded up a wide-ranging selection of the best gourmet chocolates available—there’s sure to be something you’ll love! 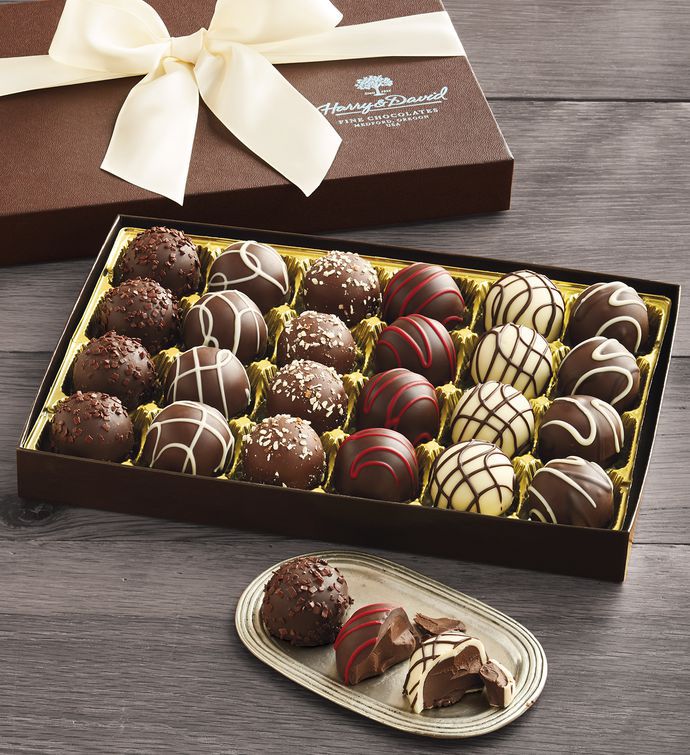 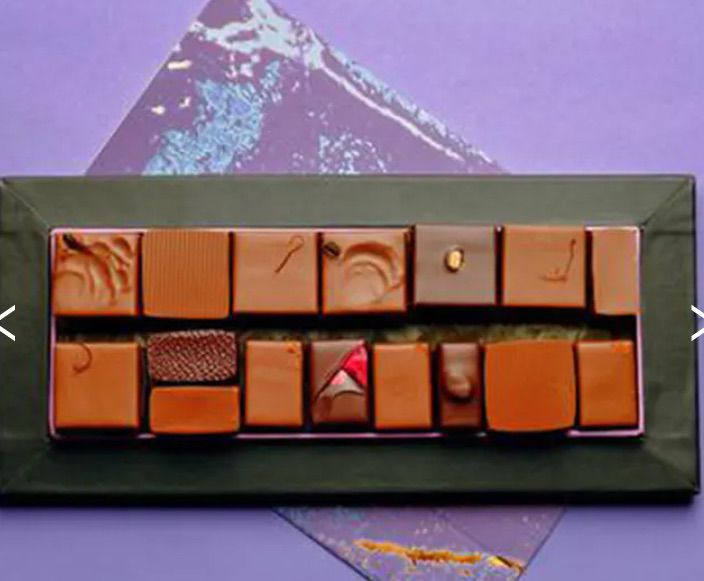 Crafted daily in a New York City shop connected to Chef Gabriel Kreuther’s two-Michelin starred restaurant in the Grace Building across from Bryant Park, these chocolates are seasonally designed and created by the restaurant’s pastry chef, Mark Aumont. Chef Aumont began his life as a chocolatier as a young apprentice in his father’s shop in Chamonix, France followed progressively by positions at award-winning restaurants around the world.

He’s said that the ideas for his bonbons come from the city itself, and in a conversation I had with him when the Kreuger Handcrafted Chocolate shop first opened, he noted that music can also be an inspiration for him to create chocolates that "tell a story." Each one is truly a very special treat! Flavors can include tahitian vanilla, gingerbread, salted butter caramel, mint, honey saffron, kumaru, banana peanut, Mexican hot chocolate, oatmeal cookie, and French baguette. This is an unforgettable collection of 24 pieces.

The 7 Best Chocolate Subscription Boxes of 2021 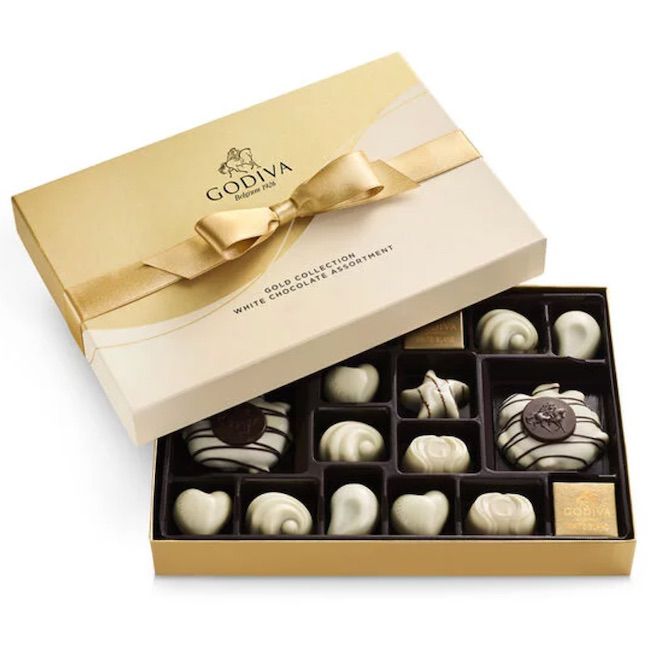 For decades, Godiva chocolates have been known as an elegant and delicious gift for any occasion, and this box of white chocolates is a dream! With 22 pieces, the variety is incredible. The fillings include raspberry, praline, hazelnut, dark chocolate ganache, cashew, and caramel, and they all come in different combinations and gorgeous shapes all packaged up in a luxe gold and white gift box. Named after Lady Godiva, the Belgian company began in 1926 and was appointed as an official chocolatier to the Royal Court of Belgium in 1968. Godiva entered into the international market in 1972 with the boutiques we now see in many countries around the world.

The 7 Best Drinking Chocolates in 2021 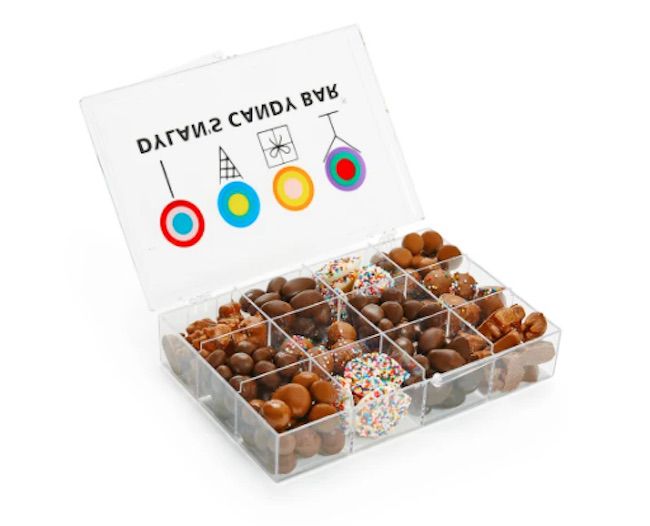 This cute tackle box offers a selection of different chocolate-covered treats in your choice of dark or milk chocolate: pretzels, almonds, gummy bears, raisins, cookie dough, and white chocolate nonpareil! Dylan’s Candy Bar has a way of doing candy that’s both drool-worthy and well-designed. This signature clear tackle box makes snacking easy and can be kept afterward to store treasures, making it a particularly sweet gift for anyone on your list. 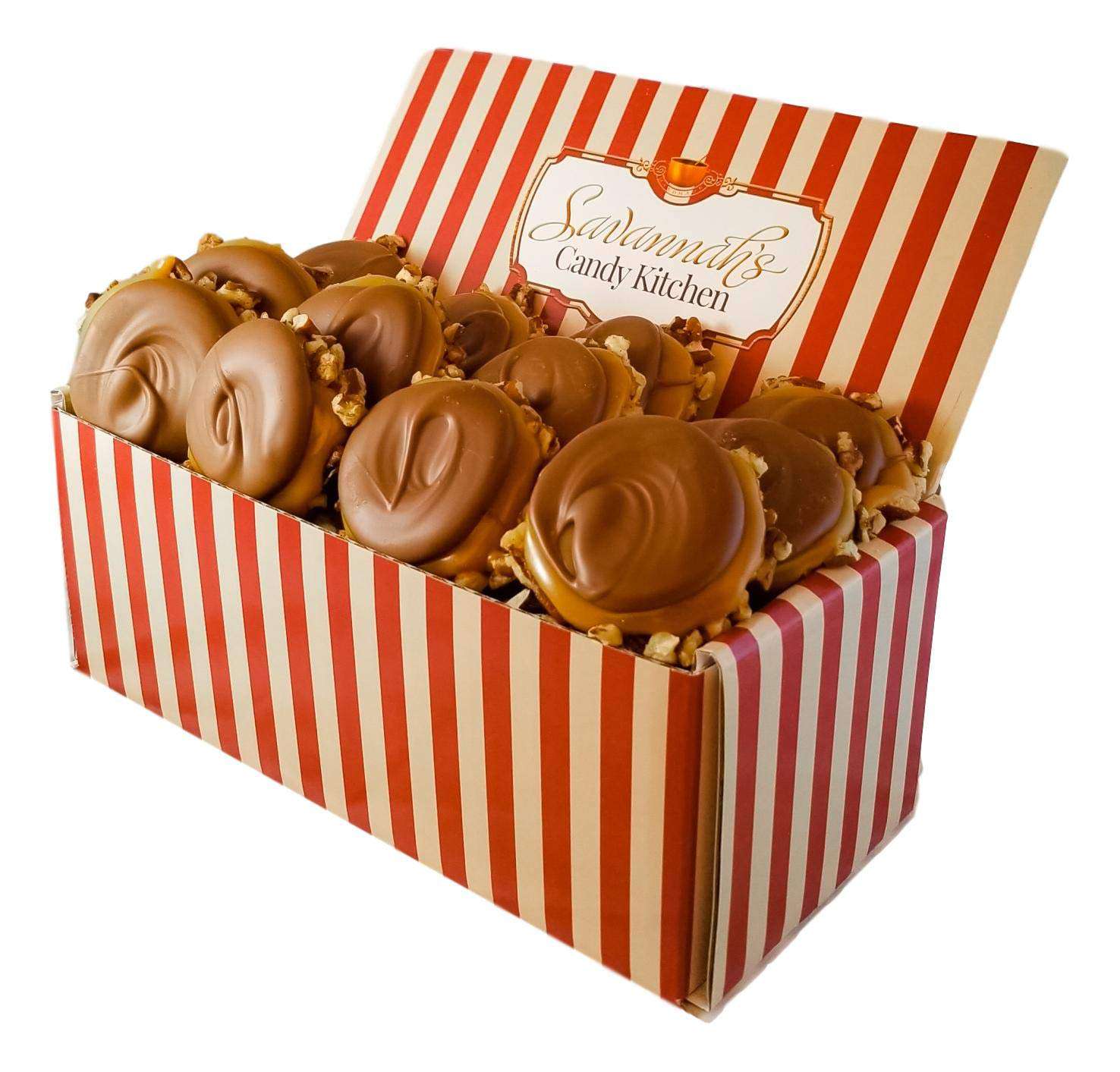 Pecans and caramel dipped in chocolate: This is what Turtles are all about. The only bad thing about chocolate Turtles is that it’s almost impossible to eat just one. There are 24 Turtles in this old-fashioned red and white striped gift box from Savannah’s Candy Kitchen, which has specialized in down-home Southern delights since its inception in 1990 in Historic Savannah, Georgia. These candies are freshly prepared and they’re not tiny little things, either—each Turtle weighs in at a nicely sized 1.3 ounces! 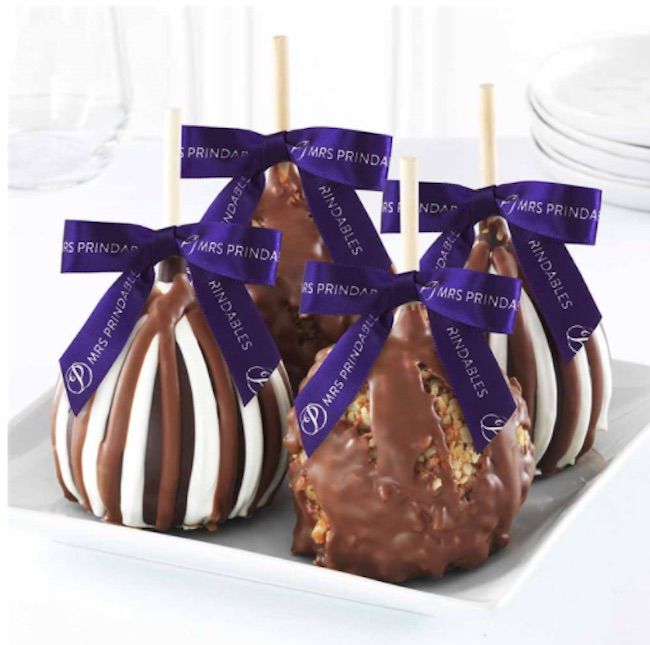 We think it should always be candy apple season, and when the candy involved is chocolate it’s even better! This package of four fresh Granny Smith apples are first dipped in caramel then covered in chocolate in two different styles: two are first covered in dark chocolate then draped in thick ribbons of milk, white, and dark chocolate, and two are rolled in walnut pieces and smothered with milk chocolate. Each petite caramel apple will serve 1-2 people, and the box weighs approximately 2 pounds. If you prefer a candied apple without nuts, there are nut-free options as well, and if you really love candy apples, there’s even an Apple of the Month program!

View On Amazon View On Murrayscheese.com

This isn't your average chocolate bar. It's an exquisitely smooth pistachio praline with whole pistachios folded in, then covered with dark chocolate. It’s easy to imagine, but difficult to find anywhere but in this bar. Francois Pralus is one of the three maître chocolatiers (in other words, a chocolate master) in all of France and his chocolate is exceptional. He sources and blends his own cacao beans from all over the world and is the son of August Pralus, who was awarded the prestigious Award of National Merit.

Francois follows in his father’s footsteps of being a creator of new ideas in pastry and chocolate: August was famous for his Praluline—a very special pink bread—and Francois continues the traditions by making chocolates that are farm-to-table and by creating innovative treats like this Infernal Bar. 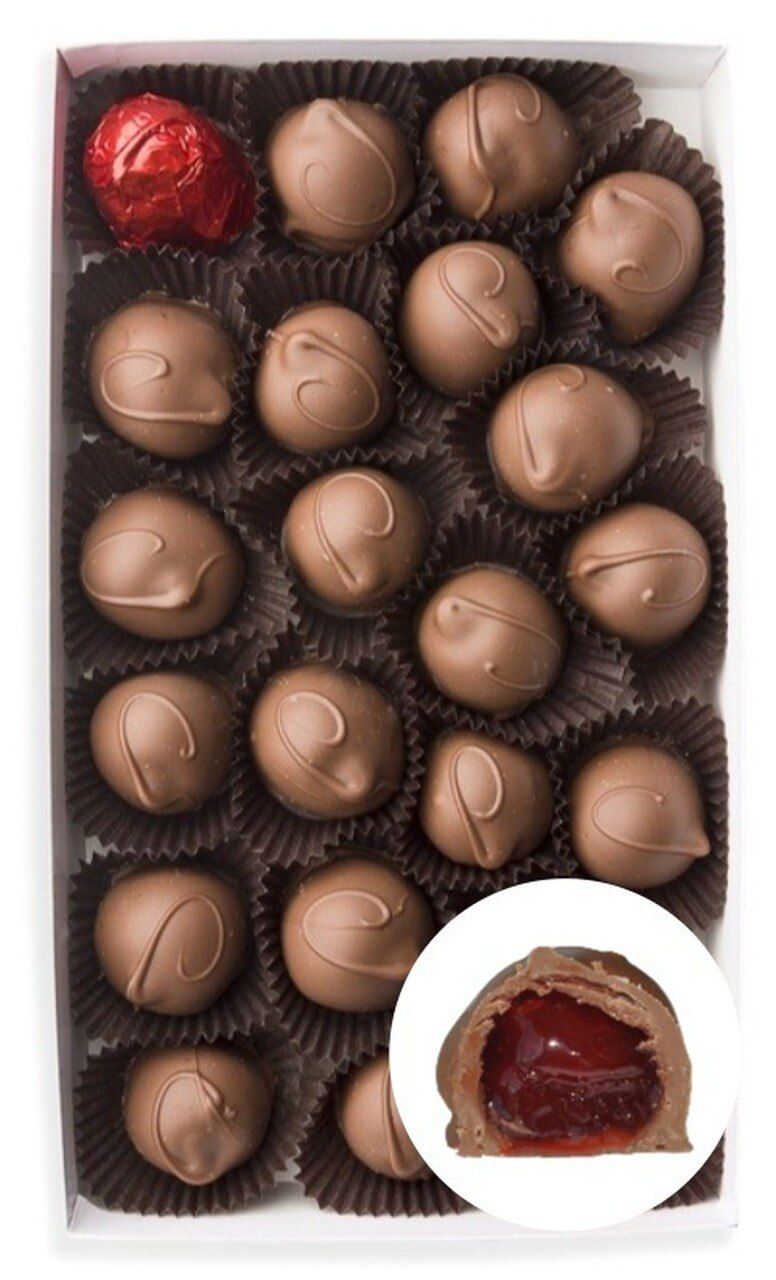 View On Amazon View On Mrscavanaughs.com

Cordials are a special type of chocolate that are a bit deceiving to the eye—they may look like regular truffles, but there's a liquid filling hiding within each sweet shell. These particular cordials from Mrs. Cavanaugh's feature a deliciously sweet cherry in the center of each treat, and you can select whether the fruit is coated in milk or dark chocolate.

There are several box sizes available, ranging from 4 ounces all the way up to 5 pounds, and you'll get around 22 pieces per pound. The candy is freshly made in Utah, and the cordials arrive in a cute box that's perfect for gifting. 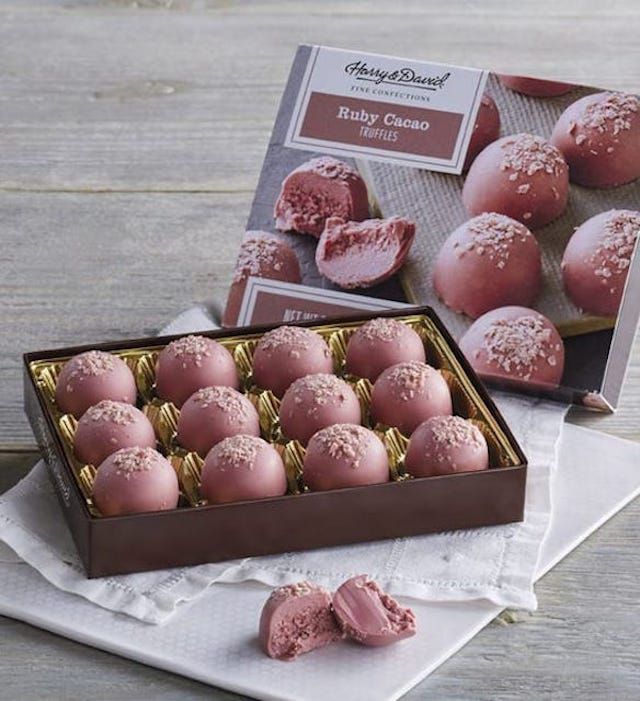 Did you know there's a special cocoa bean that yields naturally pink chocolate? The ruby cocoa bean is a relatively new creation, and it's used to make delicious pink chocolate like these Ruby Cacao Truffles. There's no coloring added to these creamy creations, which feature a natural berry flavor. There are 12 truffles in each box, and these unique chocolates would be a great gift for anyone who loves the color pink!

5 Chocolate Advent Calendars That Make the Holidays Even More Delicious 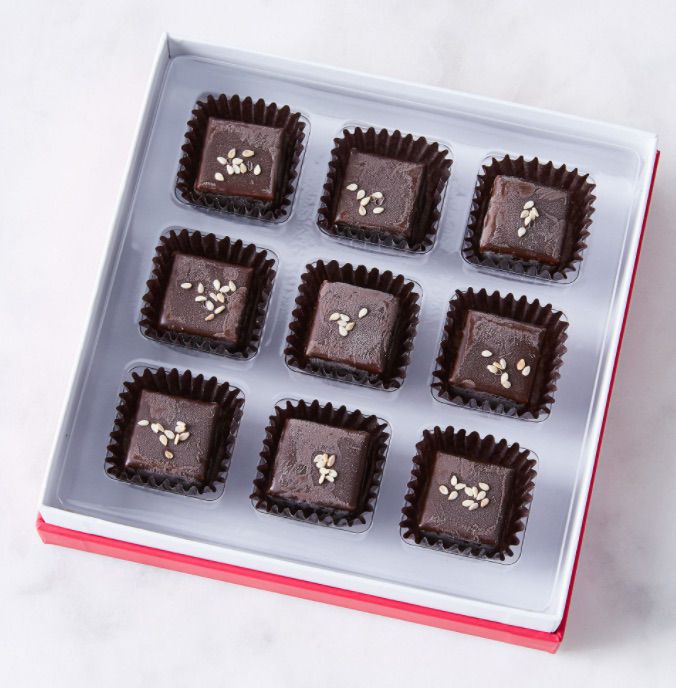 Not too sweet but just sweet enough, these elegant dark chocolate bonbons are filled with smooth tahini, sesame brittle, and milk chocolate. Made in Waynesboro, Pennsylvania by Zoe’s Chocolate Co., they are a winner of a Good Food Award (an annual award competition for outstanding American craft food producers). The gift box includes nine decadent pieces.

For the most elaborate fine chocolate collection, go for the Kreuther Handcrafted Chocolate Chef's Collection. For the best classic yet elegant selection, the White Chocolate Assortment Gift Box at Godiva is a sure winner.

Karen Resta is a writer specializing in food culture and history, cooking, pastries, and restaurants. She's also a former pastry chef and has traveled to Budapest, Kyiv, and Paris during their Fashion Weeks as a photographer and writer, always finding the best authentic pastries along the way. She now spends a lot of her free time baking at home and recommends quality within your given budget.