The 8 Best High-Powered Blenders in 2021

Supercharge your smoothies and soups

It used to be that high-speed, high-powered blenders were mainly found in professional kitchens, while blenders marketed for home cooks had certain power and speed limitations. But these days, that line has started to blur, and pro-level blenders are now far more available for household use and no longer produced by just a few brands.

While they tend to be far more expensive than more basic models, high-powered blenders have the power to process fibrous vegetables and fruits and hard foods, like nuts and ice, in a way that weaker blenders can’t—producing velvety smoothies, silky nut butters, and billowy sauces. Some can even make hot soups—using either a built-in heating element or the power of friction produced by blades whirring at high speeds—and many offer connected “smart” functions and self-cleaning programs.

In fact, there are so many options and features that it can all be pretty overwhelming, so here’s our guide to the best high-powered blenders in several categories.

Vitamix has long been considered the gold standard of high-performance blenders and is still the brand favored by many professional chefs and restaurant kitchens for its power, design, and durability. Its high price point has kept it out of the reach of many home cooks, however. The Vitamix Explorian range is the new entry-level offering from the respected American brand, offering power at a more manageable price.

While still not cheap, it’s brawny enough, at 1,380 Watts, to handle many different tasks, from smoothies, hot soups, and doughs to nut butters and non-dairy milks. The control panel is very basic, offering 10 different speeds and a pulse function, but no preset programs. The 48-ounce pitcher, made of heavy-duty, BPA-free plastic, is a bit smaller than some of our other picks but dishwasher safe. 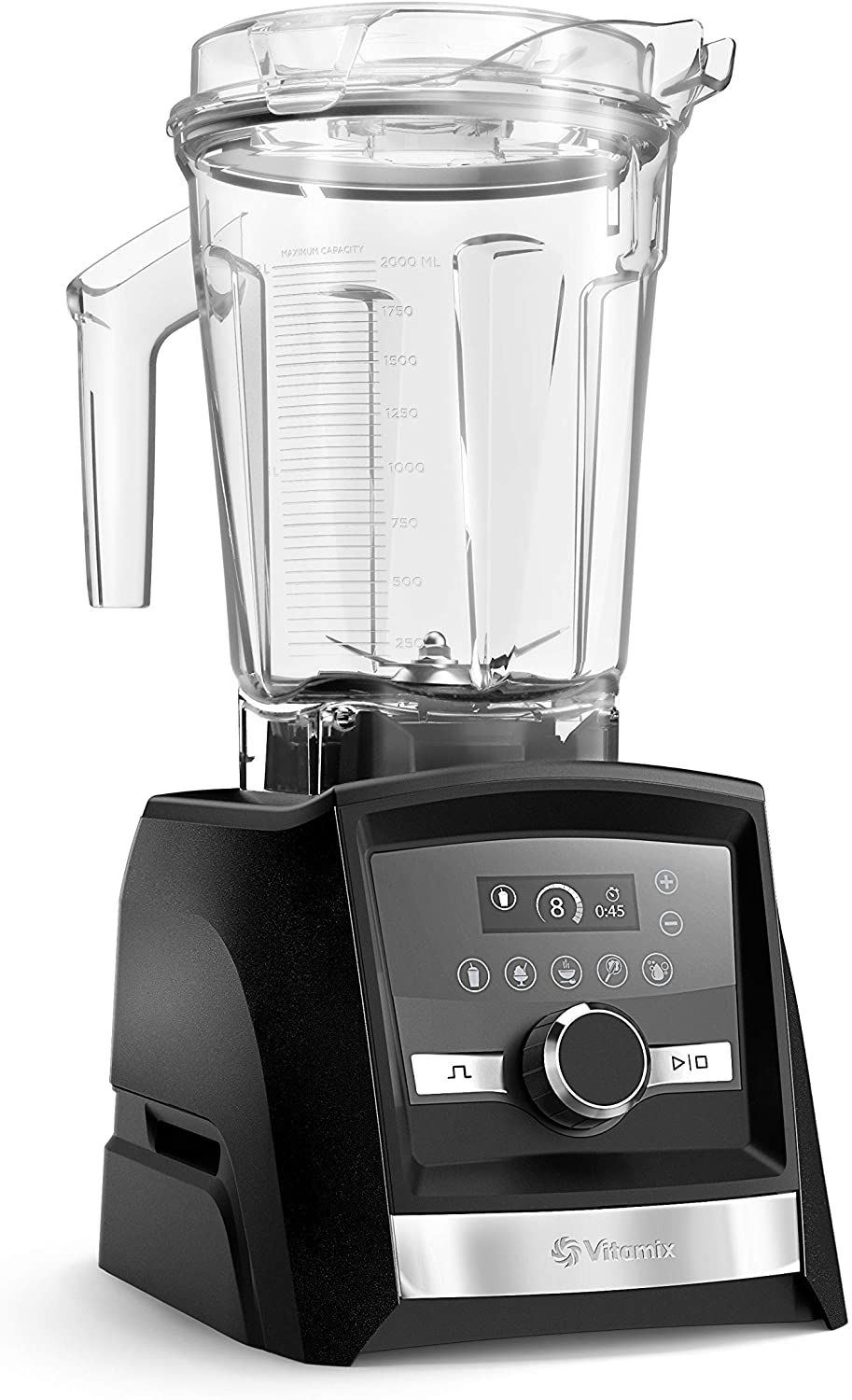 4.9
View On Amazon View On Williams-Sonoma View On Best Buy
What We Like
What We Don't Like
Vitamix A3500 Ascent Series Smart Blender Review

This sleek, high-tech Vitamix blender goes far beyond basic power blending. The base features touchscreen controls and built-in wireless technology that automatically recognizes the size of the container that’s been installed and adjusts the available program settings and blend times accordingly. In addition to five pre-programmed settings and a knob with 10 speed settings, when used with the Perfect Blend mobile app (which also connects with the optional Perfect Blend wireless scale, sold separately), the blender can be set to follow more than 10 preset programs and hundreds of recipes.

Unlike entry-level Vitamix models, the base is made of elegant metal, rather than plastic, but the 60-ounce pitcher is still built from heavy-duty, BPA-free, and dishwasher-safe plastic.

"While a blender is never going to be silent, this one is surprisingly less noisy than we’d expect, given its power." – Donna Currie, Product Tester 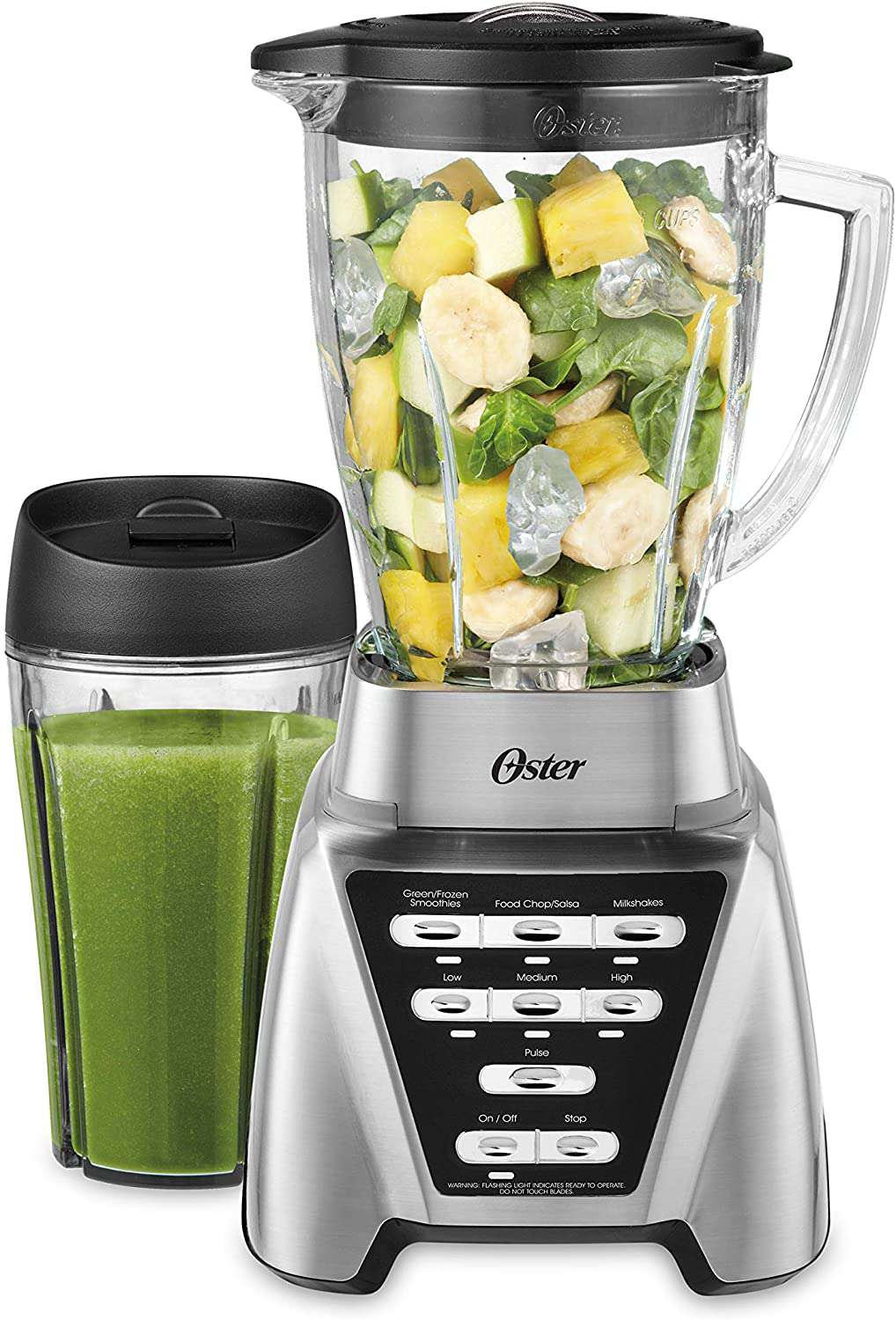 This blender from Oster offers a surprising amount of power at a very affordable price. It has a 1,200-Watt motor, powerful enough to handle tough ingredients like kale, and comes with a 6-cup glass pitcher that’s resistant to thermal shock and is dishwasher safe. As a bonus, this blender also comes with a 24-ounce, portable smoothie cup that you can attach and blend directly into, for a quick, to-go smoothie. On the downside, it offers only three preset functions (smoothie, milkshake, and chop) and three speeds, but it’s hard to expect more than that at this price point. Some users have reported that their blender broke or malfunctioned quickly, but it does come with a three-year guarantee. 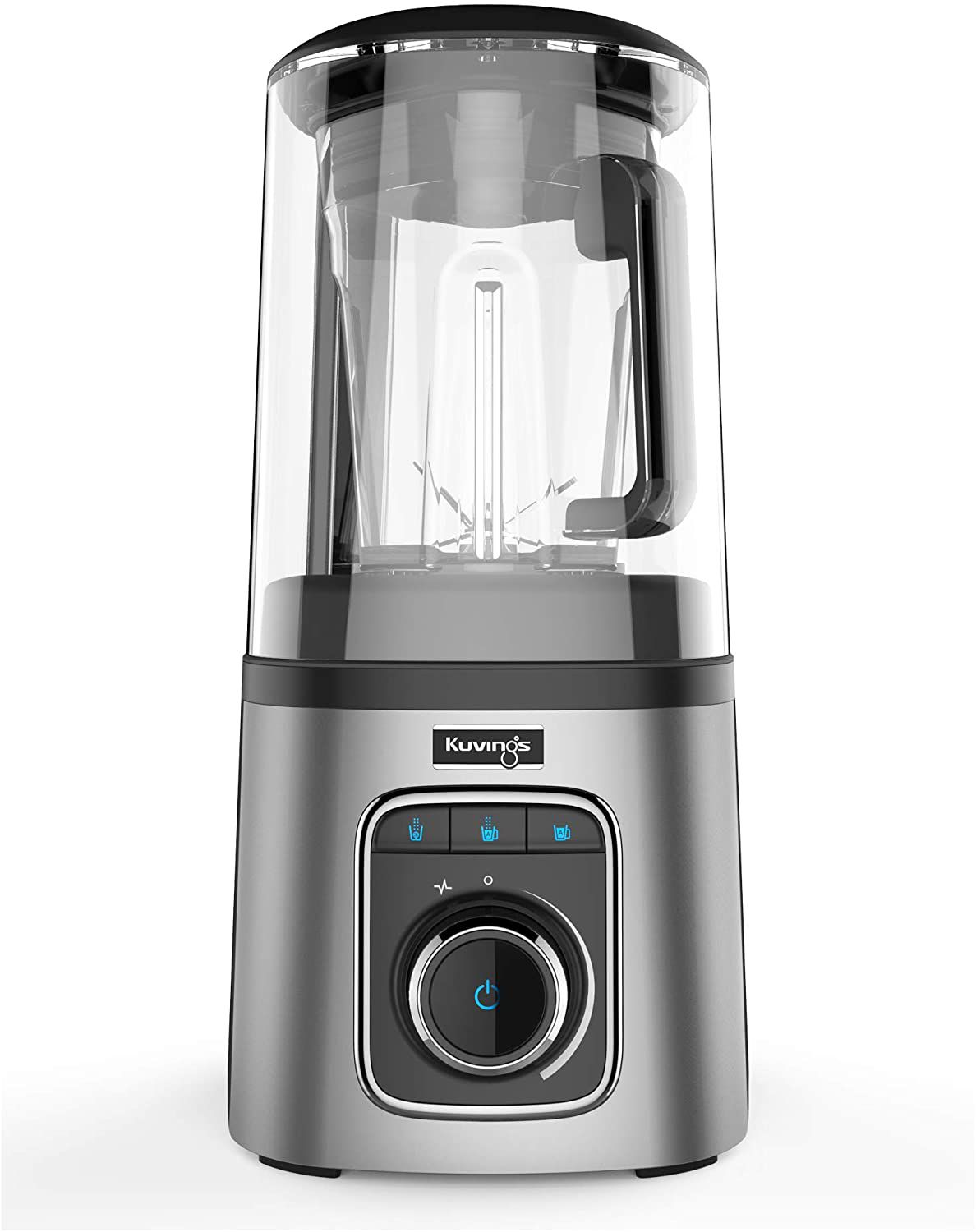 If you take your smoothies seriously and are willing to invest in a top-of-the-line piece of equipment to supercharge them, it’s worth considering a blender that uses vacuum technology. Some high-end blenders offer add-on vacuum attachments, while others, like this one from Kuvings, come with it built-in. So what is a vacuum blender? It’s not a blender that also cleans your floors; it simply means that air is removed from the container before blending, which has several benefits: It makes smoothies less frothy and foamy and prevents separation, it prevents oxidation so that colors and tastes remain bright and vibrant, and it allegedly also preserves nutrients.

This vacuum blender is quite pricey, but it boasts a high-power 1,700-Watt motor, strong enough to also make nut butters, and a noise-dampening hood. The 40-ounce, BPA-free plastic container has a more limited capacity than most of our other picks, but the blender also comes with a vacuum-sealed tumbler so that you can store smoothies and other blended foods, and they’ll remain fresh.

Some high-powered blenders claim that they can make hot soups just through the friction created by their blades at high speeds. In practice, however, that claim often falls flat and leaves you with soups that are lukewarm, at best. This powerful 1,400-Watt blender, however, has a heating element built into the base of its pitcher. It features an impressive array of preset programs and can chop and saute ingredients and then cook and blend them into a smooth or chunky soup. You can throw some ingredients into it, press a button, walk away, and come back later to a ready-to-eat soup.

In addition to soups, it makes smoothies, cocktails, and all the other things a usual high-speed blender can. The nonstick glass pitcher is a bit heavy and tricky to clean (due to the heating element, it can’t be immersed in water or cleaned in a dishwasher), but the blender does feature a “self-clean” function: Just put some water and a few drops of dishwashing soap in the blender, and it will run at high speed for a minute to clean itself, though it might need a bit more scrubbing by hand with the included cleaning brush. Another plus: The blender also comes with a tamper.

The 8 Best Food Processors and Blenders of 2021 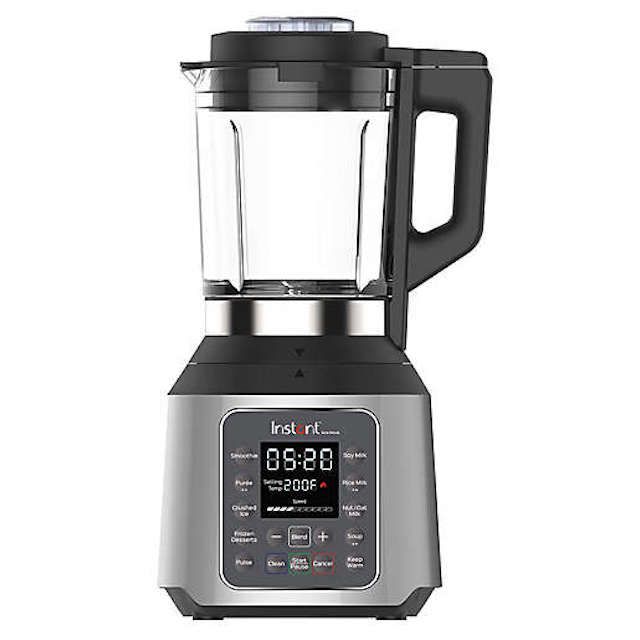 This 1,000-Watt blender, from the makers of the popular Instant Pot multi-cooker, can also make smoothies and cocktails and has a built-in heating element for hot soups. On top of that, however, it can make doughs and batters and is designed to make dairy-free milks from soy, oats, rice, or nuts, so it’s great for vegan or lactose-free diets. It comes with a cleaning brush, tamper, and a straining bag for dairy-free milks. The 56-ounce jug is made of sturdy borosilicate glass and the unit is covered by a 12-month warranty.

4.6
View On Amazon View On Wayfair View On Best Buy
What We Like
What We Don't Like

Though compact, this 1,000-Watt blender is fast and powerful. It comes with an 18-ounce cup and a 24-ounce cup, both with tight-sealing sipping lids, so it’s perfect for making individual smoothies on the go. The intelligent preset programs mean you can put your ingredients in the cup, press the button, and walk away. All of the removable parts are made of BPA-free, dishwasher-safe plastic.

Blendtec is a family-owned, U.S.-based manufacturer that produces commercial blenders for many well-known national chains. This household model features a large 90-ounce jug that can hold beverages for four to six people. The jug is made of BPA-free plastic and is dishwasher safe. The 1,560-Watt motor is powerful enough to create hot soups through friction alone, and the unit features four pre-programmed cycles and five manual speeds. The blender comes with a reassuring 8-year warranty.

For overall best performance and reliability, the Vitamix E310 Explorian Blender (view at Amazon) is our top pick, but its interface and functions are quite basic. If you prefer a high-tech machine with all the bells and whistles, the Vitamix A3500 Ascent Series Smart Blender might be more your speed.

What to Look for in a High-Powered Blender

The motors of high-power blenders generally start at around 1,000 Watts and go all the way up to 1,800 Watts. While you might assume that more power is automatically better, wattage alone is not the most crucial feature. The overall design is more important for how well a blender functions. In general, however, look for a minimum of about 1,100 to 1,200 Watts.

Blenders that have larger blades arranged in an asymmetrical pattern, and a greater number of blades, generally perform better than those with fewer, smaller blades mounted parallel to each other, which can create a space below the blades where food gets trapped and never gets processed.

There are pros and cons to both materials, so which is best depends on your needs and preferences. Glass jugs are heavier, but they are less likely to retain odors and stains than plastic jugs. Most high-powered blenders, however, use hefty, BPA-free plastic jugs rather than glass, since glass can shatter at high speeds. Another minor issue: Over time, blending hard things (like ice or nuts) at high speeds can scratch the inner surface of a plastic jug, so it grows cloudy, but that shouldn’t affect performance. If glass is your preference, look for a model that’s made from tempered glass that’s more resistant to thermal shock. Another thing to keep in mind: Tall and narrow jars tend to favor better blending, but blenders that are taller than 18 inches might not fit beneath many kitchen cabinets.

When making smoothies and smooth soups, a tamper can be an important accessory that lets you safely push stubborn chunks of fruit or vegetable toward the blade without having to remove the lid. Some blenders come with a tamper, while others offer them as an optional, sold-separately accessory.

This article was written by Danette St. Onge, formerly the Italian Food Expert for The Spruce Eats and a features editor at Cook’s Illustrated magazine (part of America’s Test Kitchen). An avid kitchen appliance and utensil junkie, she spends hours combing the Internet, comparing options, reading reviews, and testing to find the best tool for every job.

The Vitamix A3500 Ascent Series Smart Blender was purchased for and tested by Donna Currie, a writer and product reviewer for The Spruce Eats.

The 8 Best Immersion Blenders in 2021
Article Sources
The Spruce Eats uses only high-quality sources, including peer-reviewed studies, to support the facts within our articles. Read our editorial process to learn more about how we fact-check and keep our content accurate, reliable, and trustworthy.
Continue to 5 of 8 below.