Joshua M. Bernstein
Joshua M. Bernstein is a journalist specializing in beer, spirits, food, travel, and other intoxicating ways of the world, as well as an occasional tour guide, event producer, and consultant.
Learn about The Spruce Eats' Editorial Process
Fact checked by
Haley Mades

As recently as a decade ago, nonalcoholic beers were nothing special. Breweries modeled most of them on mainstream lagers, the watery liquids lacking alcohol and striking flavors. If you wanted a robustly flavored booze-free beer, you were out of luck. Bars and restaurants even treated nonalcoholic beers as cursory additions to the menu, a lame duck option amid exciting craft beer. Why order one unless you really wanted one?

Nowadays, nonalcoholic beers have gone from an afterthought to the top of mind. Breweries across the country are developing new production techniques and recipes to create NA stouts, IPAs, and wheat beers that are as boldly flavored as anything containing alcohol.

Here are the best nonalcoholic beers to drink anytime you’re craving a cold one, but don't want the alcohol.

View On Amazon View On Drizly View On FreshDirect

Athletic might be America’s most essential nonalcoholic brewery. Since its launch in 2018, the Connecticut-based brewery has consistently released some of the most compelling nonalcoholic beer we’ve ever sampled, including the roasty All Out Stout, clean and floral Upside Dawn Golden Ale, and almost every other style of beer you can conjure. The secret is a proprietary brewing process that dampens alcohol production while retaining the massive and memorable flavors that customers expect craft beer to deliver.

Athletic offers many limited edition beers that fast sell out online—the company expanded to a San Diego brewery in 2020 to meet demand—but we’re still big fans of the year-round Run Wild. It weaves rich malt character with American hops to create a pleasantly bitter IPA that, well, might just make you go wild.

View On Drizly View On Garyswine.com View On Totalwine.com

Brooklyn Brewery is betting big on nonalcoholic beer with its Special Effects line. The brewery developed a unique approach to fermentation that promotes the development of flavor and fragrance, sans alcohol, allowing it to create character-filled nonalcoholic beers, such as the super citrusy Special Effects IPA: think limeade, hold the extra sugar. We love the Special Effects Hoppy Amber, a clean-drinking lager reminiscent of pine, fresh toast, and a touch of black tea. It’s a great anytime beer, but we’re partial to lunchtime engagements with wood-fired pizza and crunchy salads with grilled chicken.

View On Amazon View On Totalwine.com

Lagunitas is one of America’s most important IPA makers. The California brewery helped define the style with its citrusy and grippingly bitter flagship IPA. The company spent more than a year refining the recipe for IPNA, its first nonalcoholic beer, using a mix of Pacific Northwest hops, barley from Canada, and malt from the U.K. to create a heady aroma of pine needles and citrus pith. Douglas Watters, the founder of Spirited Away, a New York City shop specializing in nonalcoholic wine, spirits, cocktails, and beer, likes the “clean taste, full body, and noticeably hoppy aroma. A Lagunitas NA IPA is a long time coming, and I think they nailed it.”

Since 1979, Germany’s Clausthaler has created highly flavorful nonalcoholic beers using a patented brewing process that develops a minimal amount of alcohol. In 2020 the brewery released this 50/50 blend of its original lager and grapefruit juice, resulting in a brightly citrusy beverage that you can sip by the bottle or slip into a Champagne flute for a bubbly brunch drink. It’s well-suited for Sunday mornings or sunny afternoons by a pool.

View On Amazon View On Drizly View On Totalwine.com

Bravus makes a wide range of nonalcoholic beers, including a tart and fruity raspberry gose, piney IPA, and lime-scented Mexican-style lager. Watters is a big fan of the brewery’s Oatmeal Stout, especially when the weather becomes cold.

“I’m a sucker for dark beer during the dark months,” he says.

The roasty Oatmeal Stout is a great substitute for fans of Guinness, flaunting hints of chocolate and caramel—a really good dessert without the sweetness. The stout is “extremely smooth and delightfully refreshing,” Watters says.

Price at time of publish: From $9 for 4 Pack

View On Amazon View On Drizly

Einbecker is one of Germany’s oldest breweries, dating back to the 14th century. The brewery’s stock and trade are lagers, such as its best-selling beer pilsner—golden-toned with a gorgeous grassy scent and agreeable bitterness. The nonalcoholic version is nearly a carbon copy of the original, offering the signature snappiness and bitter bite, but none of the alcohol. This is a great beer to sip while watching sports and snacking on something salty and crispy.

WellBeing founder Jeff Stevens knows firsthand how hard it was to find a quality nonalcoholic beer. He quit drinking in his early 20s, later spending several decades working in marketing for the beer and spirits industries. He launched WellBeing in St. Louis in early 2018, releasing nonalcoholic beers such as Hellraiser, a “hop-forward amber with the perfect balance of floral aroma and spicy hops,” Watters says.

“Few nonalcoholic beers are as true to their full-strength equivalent as Enough Said,” says Allyn. The Southern California brewery’s “damn refreshing” Helles-style German lager is “perfect in every respect, except alcohol,” Allyn says. “It captures the clean cracked barley and fresh bread aroma of the pale lager style, while also matching the kiss of hops that adds a spicy layer, without the bigger bitterness of a pilsner.”

The 8 Best Beers to Drink in 2022
Final Verdict

What to Look for in a NA Beer

This might seem odd, but many nonalcoholic beers still contain some element of alcohol. Check the label carefully to see if it says 0.0 percent ABV (alcohol by volume) if you want to avoid alcohol completely.

Sometimes, in removing alcohol, companies will increase other ingredients such as carbohydrates and the calorie count can creep up unexpectedly. If this is something you're concerned about, be sure to read the label carefully to see what you're drinking.

What do you like to drink? What's your preferred taste when it comes to beer? Chances are, there's a beer that suits your preferences, or is best suited to the occasion or activity that you're planning. The best beers available in the gamut range from ales, lagers, and IPAs to goses, stouts, and brews with fruit. There is much more available to choose from than there used to be years ago.

How many calories are in a nonalcoholic beer?

NA beers typically top out around 100 calories per bottle.

Why is nonalcoholic beer getting more popular?

People are often looking to cut back on alcohol consumption, in a move that's called being "sober curious." Plus, the stigma in the United States around such a personal choice is starting to wane. The increased popularity of events such as Dry January or Dry July, in which one abstains from alcohol of any kind for an entire calendar month, has also resulted in more long-term lifestyle changes for some people.

Why is nonalcoholic beer so expensive?

There are several factors that contribute to the fact that nonalcoholic beer is often priced comparably to regular beer. It takes quality ingredients, ones that are even more apparent because there is no alcohol. Many brewers are using organic grains, which are more costly. In some cases, the production is outsourced to facilities that can brew for you, which also adds some cost. Alcohol, too, is just a byproduct of fermentation, and not something that needs to be added. On the other hand, removing the alcohol is an additional step that requires a technique or approach that's not present in the normal production of beer.

Joshua M. Bernstein, the author of this piece, knows beer. He’s written five books on the subject, as well as articles for The New York Times, Wine Enthusiast, Men’s Journal, and Imbibe. He interviewed two beer experts for this article.

Carrie Havranek
Carrie has 10+ years experience as a food writer and editor. Her work can be found in her cookbook, Tasting Pennsylvania, and her site, the Dharma Kitchen.
Learn about The Spruce Eats' Editorial Process
Article Sources
The Spruce Eats uses only high-quality sources, including peer-reviewed studies, to support the facts within our articles. Read our editorial process to learn more about how we fact-check and keep our content accurate, reliable, and trustworthy.
Continue to 5 of 8 below. 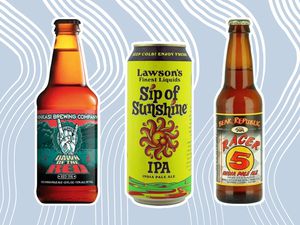