The 7 Best Peanut Butters of 2020, According to Our Taste Testers

We blind taste tested 17 peanut butters—so you don't have to.

Written by
Kate Geraghty
Kate Geraghty is a lifestyle writer and commerce editor for The Spruce and MyDomaine. Her work has appeared in All You Magazine, Girls' Life, and What To Expect.
Learn about The Spruce Eats' Editorial Process
Kate Geraghty

You may think you know what your favorite peanut butter is, but how many have you really tried? We set out to find the best of the best once and for all, so we blind taste tested 17 peanut butters back to back and graded each one on overall flavor and appearance. We didn't go into the test entirely without biases. As food editors, we thought the boutique brands and natural peanut butters would be big winners over our childhood favorites. However, that turned out not to be the case—to the surprise of nearly everyone on our team.

﻿And while we can't recommend tasting that many peanut butters in one sitting to anyone else, we did find seven delicious picks that our tasters gave their expert stamps of approval. 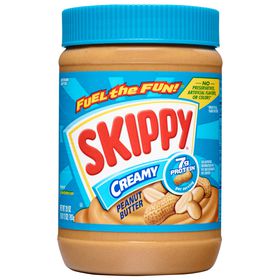 Very Good
Buy on Amazon Buy on Walmart Buy on samsclub.com
What We Like
What We Don't Like

Fluffy, creamy, sweet, and salty? This classic childhood favorite has it all, and that's what had it crowned the best tasting peanut butter of our test. In addition to having well-balanced seasoning, our taste testing team also called out Skippy Creamy's roasted taste and strong peanut flavor, which can sometimes get lost in overly sweet peanut butters.

While this pick did rank extremely highly when it came to flavor, it's not the healthiest pick on the list. Just one, 2 tablespoon serving has 16 grams of fat and 3 grams of sugar. Each serving also has 7 grams of protein.

"I have to admit that I love this creamy, sweet, and fluffy peanut butter, even though I think I like natural peanut butter." — Heather Ramsdell, Editorial Director

"This feels like the peanut butter of my childhood. It has an aerated almost frosting-like texture that makes it feel light." — Patty Lee, Food Editor 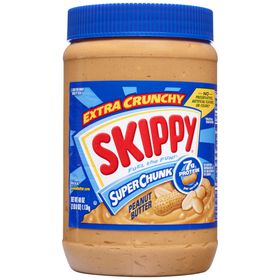 Very Good
Buy on Amazon Buy on bjs.com Buy on instacart.com
What We Like
What We Don't Like

It was love at first sight when it came to Skippy's SuperChunk, Extra Crunchy peanut butter. Just like Skippy's creamy peanut butter, our taste testers love the balance of sweet and salty in this crunchy pick, and the peanut pieces (of which there were many) only added more delicious peanut flavor to the spread.

Our taste testers did comment throughout the test that smooth and chunky peanut butters feel like two separate condiments, but this spread received much of the same praise of our best overall pick and was a clear winner among the chunky peanut butter options.

"This may be the best chunky peanut butter I've ever had." — Julia Warren, Director of Product Testing

"This smells awesome. It is highly bumpy. It is so thick I can't believe I can spread it." — Heather Ramsdell, Editorial Director 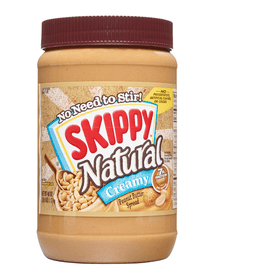 Very Good
Buy on Amazon Buy on Walmart Buy on instacart.com
What We Like
What We Don't Like

Skippy sticks to the script with this no-stir natural peanut butter, which takes the hydrogenated vegetable oil and replaces it with palm oil, keeping the peanut butter creamy without needing to stir it every time you want to make a peanut butter sandwich. Once again, testers loved the balance of sweet and salty, but some testers ranked it slightly lower for a lack of roasted flavor.

This is also a good case of remembering that "natural" doesn't necessarily mean "healthy." This peanut butter has almost the exact same level of fat, sugar, and protein per serving as regular Skippy peanut butter—the only difference is the type of oil used to make it creamy.

"I like it! I wish it was a little roastier, but the balance of salty and sweet is spot on." — Jess Kapadia, Food Editor 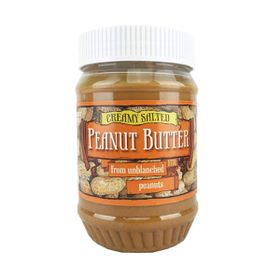 What's more intriguing than peanut butter that was unofficially titled The Spruce Eats team's "Weekend Peanut Butter?" This Trader Joe's peanut butter does require a little bit of elbow grease to mix when you want to use it, but for your trouble, you get a salty, roasted peanut butter with a deep, caramel color.

If you're looking for the best peanut butter with no added sugar, this is also the choice for you. It has just two ingredients: roasted peanuts and salt. Testers agreed that its runny texture would do particularly well drizzled over ice cream or as a dip for fruit.

"This was the saltiest peanut butter we tried—and if you know me, you know saltiness is so important to me. It was quite liquidy, but I think it could be good on a sundae." — Julia Warren, Director of Product Testing

Very Good
Buy on Amazon Buy on Walmart Buy on iherb.com
What We Like
What We Don't Like

Sometimes, you want a peanut butter that's sweet, subtle, and creamy—something to complement the other ingredients of your meal, rather than the star of the show. Described as "middle of the road" by one reviewer, this pick was overall liked but didn't leave our panel excited for more, like some of our other picks.

People loved the smooth, creamy texture, though one taster missed the stick-in-your-mouth feel many people associate with peanut butter. All five tasters remarked on the sweetness of the spread, likening the flavor to what you get inside of a peanut butter cup.

"It's got a nice complexity to it that would make it good for sweet or savory dishes." — Jess Kapadia, Food Editor

"This is a yummy peanut butter. It is sweet. But it is pretty balanced and the texture is fine, smooth, and creamy." — Heather Ramsdell, Editorial Director

Very Good
Buy on Amazon Buy on iherb.com Buy on instacart.com
What We Like
What We Don't Like

If all you need your peanut butter to do is play well in a sandwich, this chunky, sweet spread will be the one to satisfy your PB&J cravings. Its thick, extra-chunky texture will blend well with the bread and the jelly, providing just a little bit of bite in an otherwise soft and squishy sandwich.

However, peanut butters that blend well don't always stand well on their own. Eaten from a spoon, our tasters found this peanut butter to be a little too much—extra salty, extra creamy, extra crunchy, and extra sweet. But if extra is your style, this choice might be the perfect spread for you.

"It has a good chunk-to-peanut butter ratio. There's just enough to give it some texture, but also make it easy to spread." — Patty Lee, Food Editor 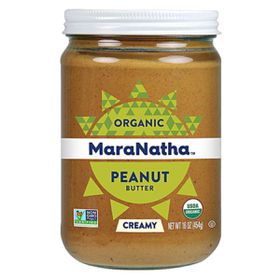 Good
Buy on iherb.com Buy on swansonvitamins.com Buy on vitacost.com
What We Like
What We Don't Like

While still highly rated, this peanut butter has the most division in those who tasted it—some people loved it, some not so much. Some people commented on its strong flavor, while others found it a bit bland. Overall, if you want a solid, middle of the road peanut butter that's not overly salted or sweetened (but not entirely unsalted or unsweetened, either), this creamy pick will probably be for you.

Our tasters, who almost all leaned towards sweeter, more processed peanut butters, found this to be one of the few picks that tasted saltier rather than sweet, and many commented on the soft, loose texture that would work well on a sandwich or piece of toast.

"I like this—it's a solid peanut butter. It's not sweet enough for my normal taste, but I think thrown on a good PB&J it would work really well." — Eric Handelsman, General Manager

"The texture feels very balanced—it's creamy without being runny and not too thick." — Patty Lee, Food Editor

Skippy Creamy earns our top spot because of its balanced roasted peanut flavor combined with its light, fluffy texture (check it out at Walmart). If you prefer a natural peanut butter (but still like it sweet!), try Maranatha Creamy Peanut Butter—it's not overly seasoned, and it's creamy without being too runny or thick (get it on iHerb).

What to Look for in Peanut Butter

Variety: Peanut butter comes in two main varieties: smooth and chunky. The smooth kind is creamy and tends to be easier to spread, while chunky has pieces of peanuts incorporated into it. Among those, there are stir and no-stir peanut butters (the latter have oil separation and need to be mixed), natural spreads (which don't contain any artificial ingredients), those with no sugar or sweeteners added, and those that are reduced-fat—which, because the fat has been removed, usually have more sugars and starches added to boost the flavor. There are also brands that mix peanut butter with another spread, such as jelly, honey, and chocolate.

Ingredients: Natural peanut butters tend to only have two ingredients or less, with peanuts as the main ingredient. When they do have sugar or oil added, they tend to be natural alternatives such as cane sugar (instead of corn syrup) or palm oil (instead of hydrogenated oils). If you prefer a saltier peanut butter, look for kinds with only peanuts and salt added. But if you prefer your variety on the creamier, sweeter side that's easy to spread, your best bet would be the kind with an added sweetener, plus oil to prevent natural separation that would require stirring.

"I've worked at The Spruce Eats since the beginning and for years prior on the About.com Food content. I've worked in media for 15 years, eight of that in food media specifically. I gravitate towards sweeter, grocery store brand peanut butters."

"I've been at The Spruce Eats for 9 months and in media for 20 years. I love peanut butter, and gravitate toward natural peanut butter that is smooth or chunky and salty but not sweet. I don't really like sweet peanut butter so much."

"I've been the Director of Product Testing at Dotdash for two years. I have over 10 years of experience as an editor, including a number of years as a food editor, a bachelor's in Food Science from Cornell University, and a degree from The International Culinary Center in NYC. I have a soft spot for nostalgic brands from my childhood, but will go natural every so often. I prefer creamy over crunchy."

"I've worked at The Spruce Eats for one year, in food media and publishing for 12 years. I like creamy Skippy, occasionally Honey Nut Skippy."

"I've been with The Spruce since August 2018, have worked in media and food for a decade. I don't have a strong peanut butter preference. "