Stand mixers are a favorite appliance for those who like to bake, but not every mixer can stand up to the rigors of bread making. Dense doughs that require plenty of kneading can overwhelm a mixer without enough power, and mixers that don't have variable speeds need to be watched carefully to make sure they provide adequate gluten development without overworking the dough.

If you enjoy making bread and want to incorporate a stand mixer into your baking routine, you'll want to choose a good quality mixer with the right attachments, capacity, and enough power to handle your favorite bread recipes.

Keep reading for our picks for best stand mixers for bread—you'll find one for every budget below! 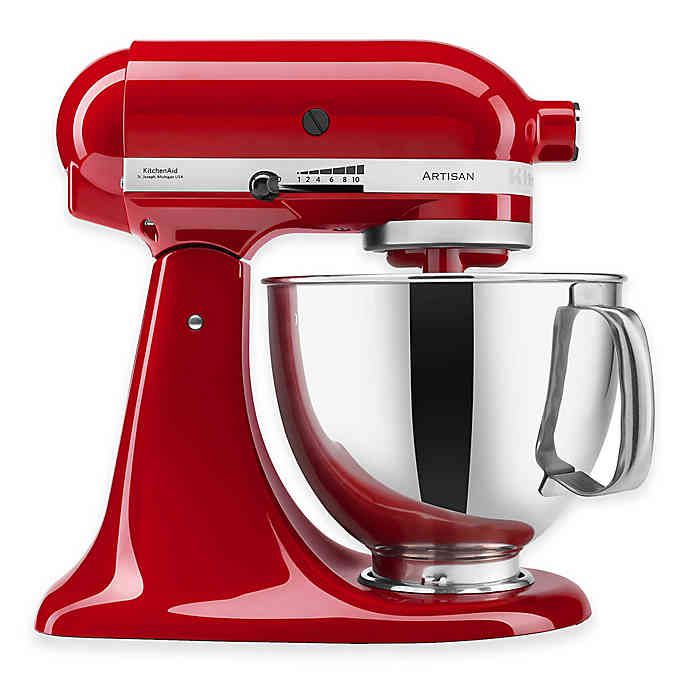 Bread machines are great, but you can make bread without them. Combining the ingredients in a stand mixer and oven-baking is another reliable method. The KitchenAid Artisan Series stand mixer might be the most iconic model out there, known for its durability and performance when mixing everything from meringues to pizza dough.

With 10 speeds and a 325-watt motor, this model features a 5-quart mixing bowl and standard paddle, dough hook, and whip attachments (with a power hub to use with a multitude of additional attachments). Weighing in at 23 pounds, this stand mixer will stay in place without worry while in operation, and the tilt-head mechanism allows for easy removal of the mixing bowl.

“I also like the pouring shield (on this model),” says Kelsey Rose Weber, an LA-based food stylist who has been using her KitchenAid mixer daily to churn out loaves for friends and neighbors. “Baking bread can get messy really fast, and the pouring shield helps with the clean-up.”

She also cites the handle on the bowl as a plus (allowing you to retain a firm grip while scraping bread dough out of the bowl) and the coated dough hook (making it dishwasher-safe). Since the machine is often a constant fixture on the counter, it also helps that there are over 32 available finishes, allowing you to color-coordinate with your kitchen decor. 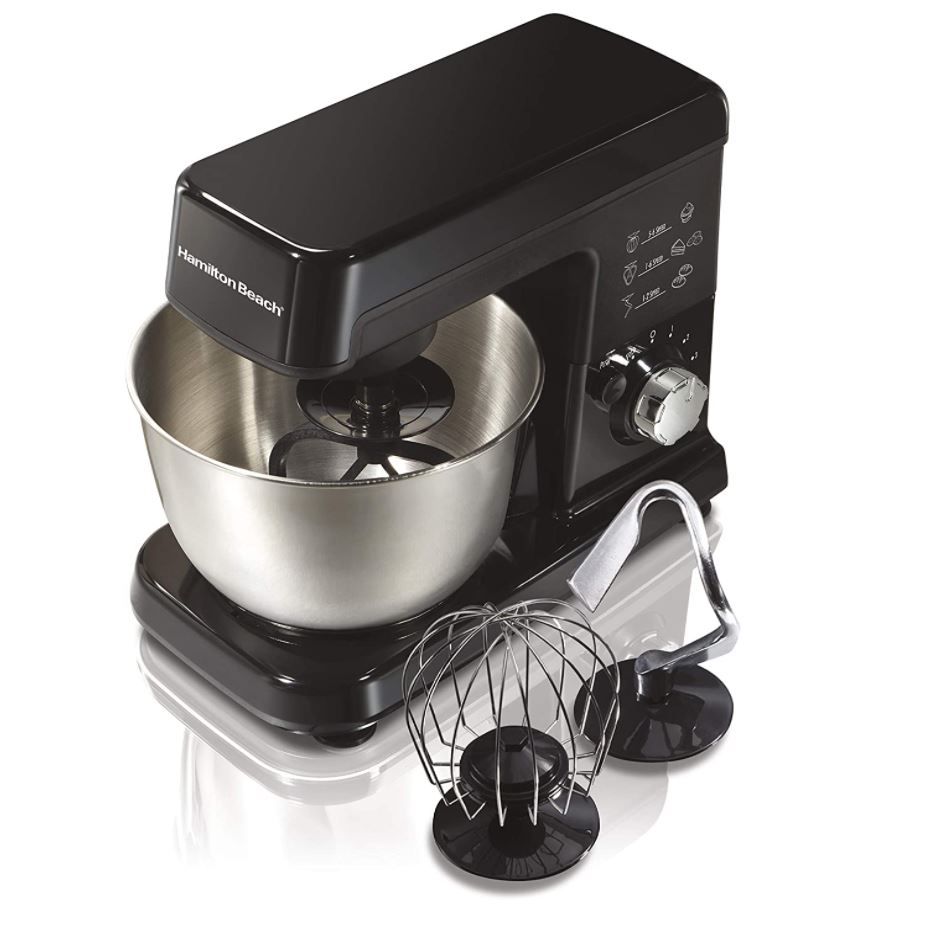 Buy On Amazon Buy On Wayfair Buy On Hamiltonbeach.com
What We Like
What We Don't Like
Hamilton Beach 6-Speed Stand Mixer Review

For the price, the 300-watt Hamilton Beach 6-Speed Stand Mixer does a decent job at mixing most bread dough and batters for quick breads. “The Hamilton is great for smaller batches and for softer doughs,” says Weber. “For the price point, this mixer will be a great addition for a novice baker.” Our product tester agrees: "The mixer seemed to strain just a little, but it still gave me a silky-smooth dough. ... It would be a great mixer for bakers with more modest needs," she notes.

Similar to KitchenAid, it has a mixing action that allows the attachment to revolve around the bowl to ensure even mixing. This model includes a 3.5-quart capacity stainless steel mixing bowl, dough hook, wire whisk, and plastic paddle.

Our tester highlights the folding option (in addition to the appliance's six speeds), which she says is particularly useful for folding in delicate ingredients, as well as for initially mixing ingredients more slowly that might otherwise fly out of the mixing bowl at higher speeds, like flour.

"With easy tasks like whipping cream, making butter, and whipping my fluffy frosting, this mixer did a great job." — Donna Currie, Product Tester 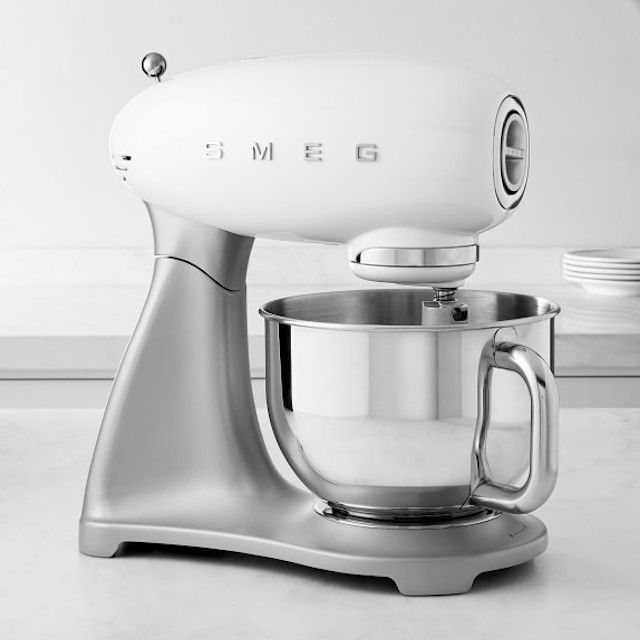 The Italian brand SMEG is known best for quality appliances in stylish, award-winning retro designs, and the brand's stand mixer does not disappoint. This compact mixer has a die-cast aluminum housing with a powder-coated enamel finish reminiscent of a classic car, complete with chrome accents and gearshift-like speed control on the top of the unit. It’s available in more than half a dozen colors.

Like many other mixer brands, the SMEG comes with the trinity of attachments (flat beater, wire whisk, and dough hook) and a pouring shield. But the SMEG brand doesn’t get by on looks alone—when it comes to performance, this machine keeps up with the KitchenAid Artisan Series with its similar planetary mixing action, 10 speeds, and tilt-head design. In fact, this mixer boasts a 600-watt motor, almost twice the power as the KitchenAid version, and it has the “Smooth" start function, which starts the machine with a slower initial speed to prevent ingredient splatter.

The 5-quart mixing bowl maxes out at almost 3 pounds of bread dough, so if you’re baking larger quantities, you’ll have to do it in batches. If you value form and design a little more than functionality, then you’ll favor the SMEG Stand Mixer for its sleek looks and solid performance. 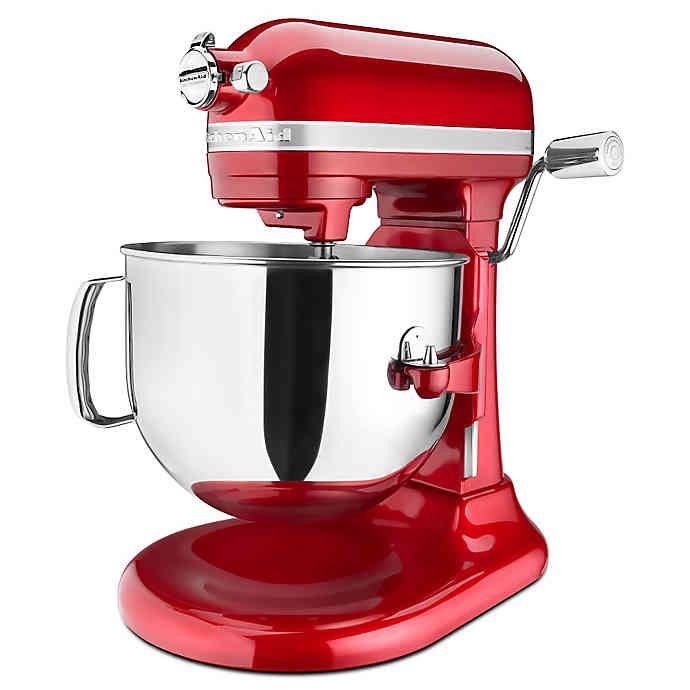 If your bread-baking habits are higher in volume, the high-performance KitchenAid Pro Line 7-quart Stand Mixer is an outstanding option. It’s a bigger, more powerful version of the trademarked KitchenAid design that can mix up to a whopping 8 pounds of dough at a time. With 10 speeds to choose from, this mixer excels at kneading heavier doughs thanks to its quiet yet powerful 1.3-horsepower motor and has the capability to knead for longer without overheating.

This mixer features 10 speeds, and its heavier weight—approximately 31 pounds—ensures that the machine won’t budge when it’s in use. The bowl-lift utilizes a crank that locks the bowl into place, and it includes a wire whip, paddle attachment, and a spiraled dough hook, which mimics hand-kneading. If you bake often, you’ll love how this mixer performs; it’s a true workhorse and lives up to everything you’d expect from a professional-grade mixer. 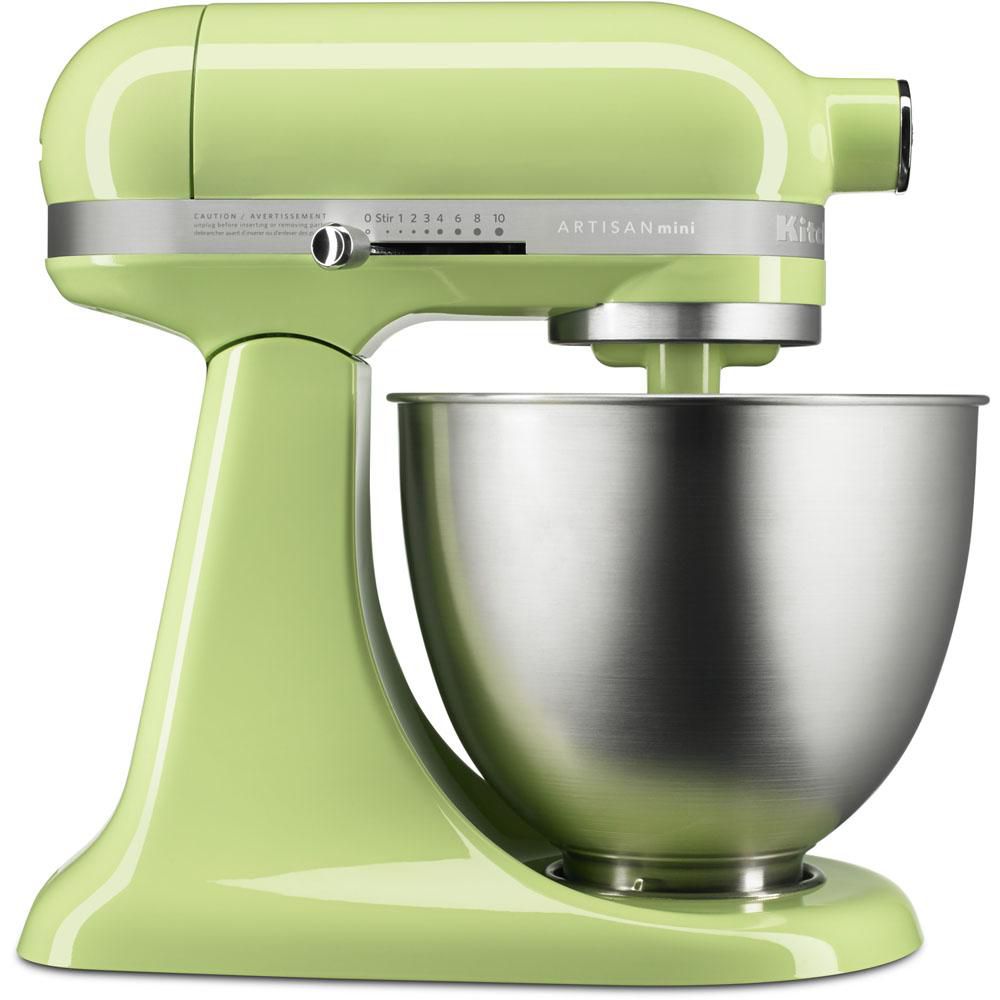 If you’re looking for the capability of a full-sized machine but simply don’t have the room for one, look no further than the 3.5-quart version of the KitchenAid Artisan Stand Mixer. Armed with the same functionality and tilt-head feature as the full-size version, this 250-watt model is perfectly sized for mixing smaller quantities. Bonus: This model has the “Soft Start” feature that eliminates ingredient “splash-out” when turning the mixer on.

“It's perfect for a single batch of bread, and it takes up less counter space for those in space-conscious kitchens,” says Weber, who has used and gifted this model to friends. “It doesn't have a pouring shield, so it can get a little messy, but it’s perfect for bakers who are medium-skilled and making single loaves of bread.” 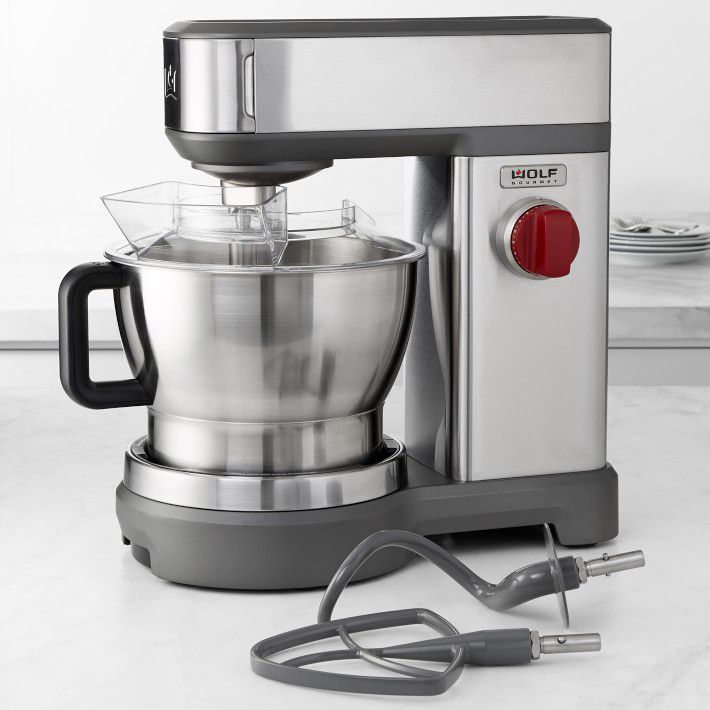 Though this stand mixer is fairly new to the game, the Wolf brand is known for superior quality and craftsmanship, as demonstrated by its highly sought-after gas ranges. This professional-grade machine features a 7-quart capacity bowl and a robust 500-watt motor that can handle 8 pounds of dough at a time. Like the KitchenAid Pro Line mixer, this model uses a bowl-lift, but Wolf’s proprietary design lifts and lowers the bowl with an easy turn of the bowl’s handle.

Bakers will enjoy the great control of mixing speed thanks to the variable speed dial and a pulse function for slowly adding ingredients into the mix. The Wolf Gourmet High-Performance Stand Mixer also includes a flat beater, whisk, and dough hook that are all top-rack dishwasher-safe, making for hassle-free cleanup. If you already own Wolf products, you’ll appreciate the styling of this mixer, as its red knob and brushed finish coordinates well with other Wolf appliances.

"No matter what speed I chose, the mixer gave a soft start, so it didn’t fling ingredients around the way a fast start can do. But even better is the pulse option that allows the mixer to be turned on and off in gentle pulses." — Donna Currie, Product Tester

If you're new to stand mixers or dough making, this lightweight stand mixer, which has six speeds, comes with all the functions and accessories you'll need—without the steep price of comparable higher-end models. Two noteworthy features: double dough hooks (as opposed to a single one) to make dough kneading easier, and a splatter guard that doubles as a pouring shield to make pouring in liquid ingredients or beating butter a breeze. There's also no setup required, and it features a tilt-head design and a bowl with a handle to make it easy to use. Our tester was surprised at how well this stand mixer was able to handle bread and pasta dough: thanks to the dual hooks, she says that she ended up with a smooth and stretchy dough; the mixer got only slightly warm when kneading the pasta dough, but otherwise, there were no issues.

In addition to the two dough hooks and splash guard, the stand mixer also comes with a whisk attachment and a beater attachment.

"Much to my surprise, the mixer was able to knead dense pasta dough and only got slightly warm in the process." — Donna Currie, Product Tester

While this stand mixer may look and operate slightly different from the other mixers on the market, it packs no less of a punch. The 600-watt motor in this machine, situated beneath the mixing bowl, provides open access to the top of the mixing bowl. Adding ingredients in several steps is less messy and provides for maximum use of the bowl’s capacity.

Ankarsrum is a Swedish company that introduced this stand mixer style in 1940, under the familiar brand Electrolux. The mixer comes with a 7-liter metal bowl specifically for dough mixing and a 3.5-liter plastic bowl for use with the beater and whisk attachments. The dough mixing function includes a dough roller instead of the dough hook used in other stand mixer models. The dough roller pairs with a scraper attachment, which continuously scrapes the dough from the bowl’s sides while mixing. The dough roller rests on the side of the bowl as it spins or can be manually moved across the bowl and locked into the position that suits you best. Don’t let the operational learning curve scare you off, though—Ankarsrum provides a complete collection of videos to show you how to use your machine correctly.

The typical attachments are provided with this stand mixer, including two cookie beaters, two whisks, a dough mixing set, two bowls, and a bowl cover. Ankarsrum also sells an impressive selection of attachments that turn your stand mixer into a versatile small kitchen appliance. Attachments include a blender, juicer, meat grinder (with sausage stuffers), grain and coffee mill, slicer/shredder, and several pasta sheeters and cutters—among several others. The machine is heavy, clocking in over 20 pounds. But the extra weight provides more stability while mixing heavier doughs. The Assistent Original also comes with a whopping 7-year warranty for the motor, which is incredibly comforting if you plan on using your machine for heavy-duty dough mixing regularly.

The KitchenAid Artisan Series 5-Quart Mixer is a tried-and-true mixer that will give you the mixing flexibility to hop from kneading doughs to whipping up frosting. If you’re excited to start mixing bread but aren’t ready to shell out several hundred dollars for a stand mixer, the Aicok Stand Mixer has been thoughtfully designed for beginner bread bakers.

The author of this piece, Bernadette Machard de Gramont, specializes in global food and wine content. She interviewed LA-based food stylist Kelsey Rose Weber for this piece and has personally used the KitchenAid Artisan series. She often uses her KitchenAid Pro Line mixer at home to bake traditional French boules, brioche, and the occasional chocolate-cinnamon babka.

This article was updated by Jenny Kellerhals, a freelance food and beverage writer based in Queens, New York. Jenny has been a professional pastry chef for over 10 years, with extensive experience using both professional and home-grade kitchen equipment.