The best rocks to make your drinks perfectly cool

Written by
Kate Dingwall
Kate Dingwall is a freelance writer whose work focuses on food, drinks, and travel. She is based in Toronto and holds a Wine & Spirits Education Trust Level III qualification.
Learn about The Spruce Eats' Editorial Process
Kate Dingwall

Our Top Picks
Best Overall:
Teroforma Original Whiskey Stones at Amazon
"Inspired by the Scandinavian tradition of chilling liquids with frozen rocks, these soapstones won’t impart any flavor to your drink."
Best Metal:
Rabbit Whiskey and Beverage Chilling Stones at Amazon
"These jumbo stones cool drinks quicker than many of the smaller options on the market."
Best Granite:
Uncommon Goods On The Rocks Set at Uncommon Goods
"Each stone comes from granite rocks embedded with recycled glass found on the beaches of New England."
Best Design:
Areaware Drink Rocks at Amazon
"These whiskey stones chill drinks quickly and look really good doing it."
Best for Home Bartenders:
Hawkins New York Mixed Natural Stone Whiskey Cubes at Food52
"Each rock in this set of six is a different color, making it easy to tell whose drink is whose."
Best for Gifting:
Amerigo Impressive Whiskey Stones Gift Set at Amazon
"This set makes a fantastic Father's Day, birthday, housewarming, or best man gift."

Whiskey stones are divisive in the spirits world. Some whiskey purists would never; they think the stones ruin the integrity of the spirit. However, “It’s almost impossible to find something that annoys me more than whiskey that’s served too warm,” says Westland Distillery’s Chris Riesbeck. “It makes everything taste out of balance and accentuates the alcohol over all the other raw materials.”

A whiskey stone is an excellent way to chill down a drink, but why not ice? As ice melts, it dilutes your drink, and next thing you know, you’re sipping a watered-down version of your spirit. A whiskey stone’s appeal comes in multitudes. Use them for liquor, but also wine on a hot day or a cocktail you are drinking slowly.

Below are the best whiskey stones for all your sipping needs.

Whiskey stones come from an ancient Scandinavian tradition of using frozen rocks to cool liquids. The brand Teroforma revived this technique in 2007 by introducing tiny rocks for chilling spirits. Soon after, they became a go-to gift for spirits enthusiasts.

Teroforma produces stones crafted from soapstone, all hand-carved in America’s oldest soapstone mill using closed-loop milling processes. Drop three into your drink and your beverage will be chilled in five minutes.

One of the big criticisms of whiskey rocks is that poorly made versions add unwanted notes of metal or rock to your sip, but the draw of soapstone is that it won’t impart any additional flavor. After you have finished your first drink, wash quickly with water, air-dry, and place in the freezer. In four hours time, the cubes will be ready for your next dram. The six rocks in this set come packaged in a handy muslin storage bag.

When sipping whiskey, the temperature should be slightly below room temperature, mid-60 degrees.

These jumbo stones cool drinks quicker than many of the smaller options on the market, plus their larger size is easier to keep track of—no losing them in a dishwasher or down the sink. Measuring 1.5 inches on each side, you only need one for each drink. The other can be shared with a friend.

The set of two comes in a sealed case, which is particularly excellent, as it protects the stones from any flavors your freezer may add. (After all, you don’t want your whiskey tasting like your frozen leftovers.) Forgot to put it in the case? Never fear—the cubes are constructed with odor-resistant stainless steel.

When you’re done drinking, these cubes are dishwasher-safe for easy cleanup. For an excellent gift option, Rabbit offers custom engraving. 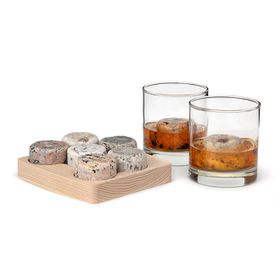 These granite rocks embedded with recycled glass were first found on the beaches of New England and then carefully carved into rounded rocks. Like true nature lovers, the designers replace every rock they take with a quarry rock for a fully closed-loop creation process. Note that because of this upcycled process and handmade nature, each rock will vary in color and shape.

For the full experience, designers Arra David and Anne Johnson include six granite rocks, a tray, and two sleek glass tumblers to the set. Even the hardwood used to create the beautiful tray comes from ethically forested sources. When entertaining, use it to serve whiskey stones to your guests. After sipping, rinse the stones or throw them in the dishwasher, then pop them back into the tray, and set them in the freezer for easy chilling.

Buy on Amazon Buy on Areaware.com Buy on Food52

Over a decade after the first square whiskey stones hit the market, many discerning drinkers have owned their fair share of whiskey stones. These stones from Areaware bring a unique design into the category, with sculptural shapes that play double-duty. They chill drinks quickly and look really good doing it.

This hand-finished set includes a selection of chunky soapstone and marble shapes—a pyramid, a sphere, a rectangular prism, and a cylinder—in a range of organic hues like granite rose, crisp white, and pale teal. Pro tip: The varying colors and shapes also act as a marker to distinguish whose drink is whose at a party or gathering. 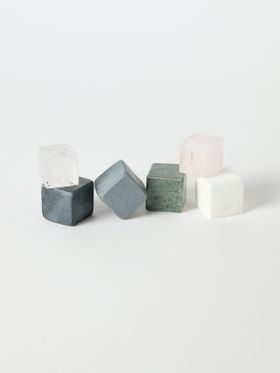 Buy on Food52 Buy on Verishop.com

If you’re playing hostess or shopping for the home bartender, these stones are wonderful. Each rock in this set of six is a different color, making it easy to tell drinks apart. There is a deep blue, pale pink, forest green, black, white, and clear stone.

All are made from assorted quality stones, including marble, quartz, and sodalite. Because all stones are naturally sourced, color variance will happen from rock to rock. Do note that these rocks require a little care and must be washed by hand.

This gift set is classy and decently priced. A handcrafted wooden box provides simple, yet attractive storage for two old-fashioned crystal whiskey glasses and eight granite cubes in a velvet pouch. Not only do they maintain the perfect temperature for your beverage undiluted by water, but your spirit will sustain 100 percent of its original flavors, too.

This attractive set makes a memorable present for drinkers who are just getting started in the whiskey world and, simply, anyone who wants their drink to stay cooler for longer without compromise. It's also a fantastic Father's Day, birthday, housewarming, Secret Santa, or best man gift. The recipient will also get a free e-book for "The Art of Whisky" as an added bonus.

Kate Dingwall is a sommelier and spirits writer. She has been writing about the bar and spirits world for five years and has her BarSmarts and WSET certification. She interviewed one whiskey expert for this article.