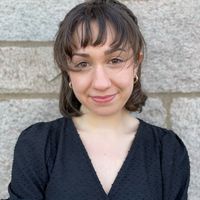 The BODUM BISTRO Burr Coffee Grinder features simple controls for folks who want to set it and forget it.

Buy on Wayfair Buy on Bodum.com
3.8

Buy on Wayfair Buy on Bodum.com
In This Article

We purchased the BODUM BISTRO Burr Coffee Grinder so our reviewer could put it to the test in their kitchen. Keep reading for our full product review.

The BODUM BISTRO Burr Coffee Grinder is designed for one simple task: grinding whole bean coffee. But do you need to grind your beans at home? While you can certainly stick to ground coffee or grind whole beans at the store, both will get stale at home if you don’t use it fast enough. There’s also a risk that your dark-roast Columbian decaf might be mingling with light-roast Arabica from a previous customer.

We are firm believers that freshly ground coffee makes the best brew. With your own grinder, you’ll have the freshest grind, and with the BODUM grinder, you can experiment with finer and coarser grinds for different kinds of coffee makers. Find out what happened when we took this coffee grinder for a spin, testing its fine, medium, and coarse grind settings and brewing the results.

Before the first use, the coffee grinder’s removable parts need to be washed and dried. After doing so, we placed the bean hopper back on top and turned it to lock. Then all we had to do was add the beans to the hopper, and it was ready to use.

This grinder is designed to be easy to use. An on/off toggle button lights up when the grinder is plugged in and turned on, which made it easy for us to see when it was ready to go. The grind size is chosen by twisting the bean hopper, and icons suggest settings for espresso, drip, and French press.

We started with those and adjusted for our preference. A dial let us set the grinding time for up to 20 seconds. From there, we simply had to press a button to start the machine; it stops automatically when the time runs out. Alternatively, we could press the button again at any time to stop the grinding.

Removing the bean hopper while it contained beans was problematic: the beans flowed freely from the bottom of the hopper, making a bit of a mess. If you want to change beans, you’ll either need to grind everything in the hopper or tip over the whole grinder to remove the beans.

The grinder was inexplicably prone to static cling, so ground coffee ended up hanging onto the exterior as well as inside and outside of the ground bean container.

As far as looks go, this isn’t the most attractive kitchen appliance we’ve seen, but then again, it’s designed more for function than for beauty. The bean hopper is clear plastic, so you can easily see how many beans are ready to grind. However, that clear hopper won’t protect the beans from light. This isn’t a major issue if you’re grinding beans daily, but the bean quality will degrade if beans are stored there for a longer period of time.

This grinder is small and light enough to be able to take in and out of storage easily. If it will live on the counter, it’s not totally unattractive, so there’s no need to hide it from view. It just won’t be a showpiece.

Performance: It’s up to the task

This grinder has settings from super-fine for espresso machines all the way to a coarse grind for a French press. The stainless steel conical burrs are designed to crush rather than slice coffee beans, which the brand boasts “preserves beans’ intrinsic flavor and aroma and provides a consistent grind.”

When we tested the finest ground, we found it was surprisingly powdery. The coarse grind, on the other hand, was chunky and a bit uneven, reminding us of coarsely crushed peppercorns. We doubt we’d even use that setting for a coffee press—it was that jagged. On less coarse settings, such as for standard drip coffee, the grind was more consistent.

When brewing without a paper filter, such as in a French press or cold brew maker, we found a bit more sediment than we liked. However, brewing with a paper filter in a drip machine or cold brew maker caught the powder. When brewing espresso, all went well after figuring out the correct grind setting. Overall, we were happy with the strength and flavor of the coffee.

One issue we encountered is that the grinder was inexplicably prone to static cling—never mind that the catcher is made of borosilicate glass, which the company claims prevents this very problem. We found that ground coffee ended up hanging onto the exterior as well as inside and outside of the ground bean container. This was most noticeable when we were grinding beans over and over while testing the settings and emptying the container after each batch.

When we tested the finest ground, we found it was surprisingly powdery. The coarse grind, on the other hand, was chunky and a bit uneven.

In normal home use, you wouldn’t be doing as much grinding at once, and you’d be wiping off the grounds and cleaning the container after each use, so the accumulation wouldn’t be as noticeable. We’ve found that some beans tend to be less flyaway than others, so your experience might be different depending on your beans.

The bottom of the bean hopper lid offers suggested grind sizes and timer settings for different types of coffee. Unfortunately, the symbols and words are just raised and not colored in any way, so they weren’t easy to read without tilting the lid to get the light just right without reflections on the smooth surface. However, most people are likely to choose one setting that’s right for their coffee maker, so the chart might not need to be used very often. Regardless, it’s handy to have available after the manual has disappeared.

This grinder also has a friction clutch that protects the machine in the case of stones. If a stone falls into the grinding chamber, it would cause a loud rattling noise, letting the user know that something has gone wrong before it could harm the grinding gears. While we’ve often found small stones in dried beans we use for cooking, we’ve never actually found them in coffee beans. Even so, this could be a useful feature if your coffee bean supply is questionable.

While this certainly isn’t the least expensive coffee grinder you’ll find, we think the price is very reasonable for a burr grinder. The grinding mechanism itself is good quality, but the controls are money-savers since they’re all manual, with no fancy displays or digital messages.

People who are looking for a grinder that is perfect for their particular coffee machine will love the idea that they can set the grind size once, then just remember how many seconds they need to grind for the perfect cup or pot of coffee. Folks who regularly switch from drip to espresso to cold brew to French press might prefer a machine with a few more bells and whistles, but of course, that type of machine will come with a higher price tag.

On the budget end of the price scale, the KRUPS Fast Touch Electric Coffee and Spice Grinder is a perennial favorite thanks to its small size and ease of use: Simply press down on the top to grind the coffee. However, this is a blade grinder rather than a burr grinder, meaning the grounds can get warm during grinding, potentially affecting the flavor. Additionally, it’s harder to control the grind size.

On the plus size, the KRUPS grinder is very inexpensive and can also be used for grinding spices, so it’s useful even if you decide to abandon it for coffee grinding. For anyone who is particular about their coffee, we’d choose the BODUM, but we still love the KRUPS as our go-to spice grinder.

At a higher price point, the Capresso Infinity Conical Burr Grinder is another quality burr grinder with similar controls. While the integrated coffee grounds container on the Capresso looks like it would contain any mess, the container tends to creep forward during grinding, causing grounds to collect behind it. While we don’t dislike the Capresso, we’d have to give the BODUM the nod if the choice was between these two.

If the price was no deterrent, we’d have to suggest looking at the Breville's the Smart Grinder Pro. Anyone who takes his or her bean-grinding seriously and wants to have total control of the grind size will appreciate this high-tech machine. It looks impressive and works very well, but it carries a hefty price tag that might be just a little too high for casual coffee drinkers who don’t need all of the extra features.

It does the job

If you’re looking for a coffee grinder that has pretty lights and intricate settings, this is not the option for you. However, if you want a simple grinder that can be set once and used every day without fuss, this grinder will do the trick. It’s not the prettiest, it’s not the fanciest, but it can grind your beans. 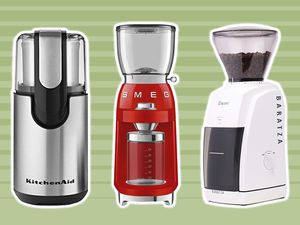 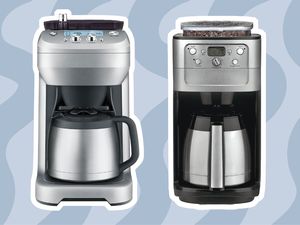 We Tested the 6 Best Coffee Makers With Grinders in 2022 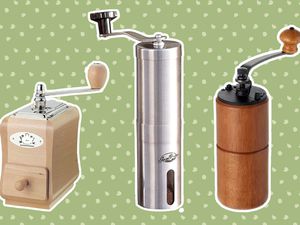 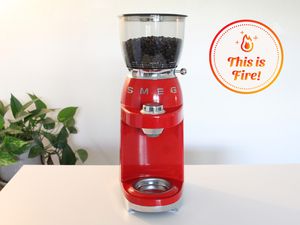 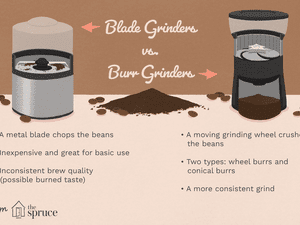 What's the Difference Between Blade and Burr Coffee Grinders? 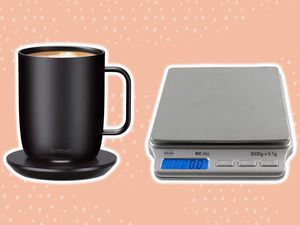 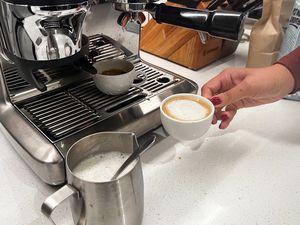 The Best Gifts for Coffee Lovers in Your Life 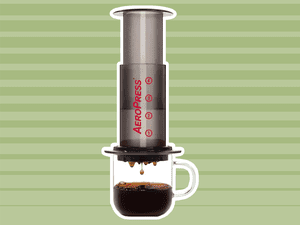