A hand mixer with impressive power, options, and luxury features

The Breville Handy Mix Scraper hand mixer comes with some luxury features and makes quick work of almost any mix.

Buy on Amazon Buy on Williams-Sonoma Buy on Bed Bath & Beyond
4.5

We purchased the Breville Handy Mix Scraper so our reviewer could put it to the test in her kitchen. Keep reading for our full product review.

Hand mixers like the Breville Handy Mix Scraper power their way through batters, doughs, and meringues. They give you more mobility than a stand mixer and far more power than stirring by hand. However, they need to be easy to use with single-hand speed adjustments. They also need the right kind of attachments, and those should be easy to take on and off the mixer. Finally, with storage space always at a premium in the kitchen, a good hand mixer should have some way to store attachments when not in use. We put the Breville to the test. Keep reading to see what it offers and how it performed in our mixes.

All of the Handy Mix Scraper’s major features can be controlled with one hand. A dial on the handle allows you to slowly increase the speed with your thumb. The speed setting shows on a brightly lit LCD display that continues to show even when the mixer is paused. We loved the pause button for adding ingredients because it also paused the timer. We didn’t realize how much we’d like being able to track our mixing times. For a serious chef, we’d consider it an extra feature worth splurging on.

Breville thought of everything with this model—from visibility to timing and one-handed use. There’s not a lot to complain about. There were only two things that were of concern to us. First, at 4 pounds, it was the heaviest model we tested. If you have limited arm or wrist strength, it could get too heavy.

The scraper beaters beautifully creamed the butter and sugar.

Second, there’s the durability of the scraper beaters. They have a rubber coating on the bottom quarter of the beater that cuts down on noise. We did not have any issues with them, but we only used them for a few weeks. Other users have had some issues with the rubber peeling off of the beaters within a year or two of purchase. This mixer comes with a one-year limited warranty that does cover this issue if it happens within the first year. But if it doesn't, you may have to buy new beaters.

It's surprising how many features Breville packed into this hand mixer. It has nine speeds that can be used with every attachment—whisks, scraper beaters, and dough hooks. Many of the other hand mixers we tested limited the use of the highest speeds to the whisks.

The dial speed adjustment makes it incredibly easy to find the right speed. A pause button lets you add ingredients but not lose track of your mixing time. And, the LCD display is bright and easy to read. We love the trigger release. It was incredibly easy to use. There’s also an ergonomic electrical plug with a space to put your finger when pulling out the plug.

There's one last feature that's easy to forget about. The Breville Handy Mix Scraper has IQ Beater Mode Recognition. Basically, this feature recognizes what type of attachment is being used and automatically adjusts the torque and speed settings according to the beater type. You don't even realize it's happening while you're using the mixer. However, it explains why we didn't have any problems when using the attachments on the thicker mixes.

If there's such a thing as a luxury hand mixer, the Breville is it. Breville has a good reputation for its luxury kitchen appliances, so we had high hopes from the start. We wanted to test a range of recipes that included things like whipping butter and eggs, mixing dry ingredients, and kneading thick dough. We chose three recipes to test performance: chocolate chip cookie dough, pancake batter, and bread dough.

We started with the whisks. Unlike some other models, the Breville has two balloon whisks. Of course, you could use just one if you wanted to. The whisks are the only attachment for the Breville that are not side-specific. You can put them in either hole on the mixer unit. The whisks powered through our dry ingredients even at a low speed. We liked that the speed setting recommendations for each attachment are directly on the mixer, so you don't have to pull out the instruction manual. For mixing dry ingredients, we did not have to go above level three.

Next, we put the scraper beaters to the test. Our cookie dough recipe required that the butter, eggs, and sugar be creamed before adding the dry ingredients. We forgot to thaw the butter beforehand, which meant it came directly from a deep freeze. After softening it in the microwave, it was still slightly stiff, but we didn’t want to ruin the recipe by letting it liquify. We worried that the Breville might not be able to cream hard butter. We were wrong.

The scraper beaters beautifully creamed the butter and sugar on setting five. You would think with a 240-watt high torque motor that the Breville might sound like a lawnmower, but it's incredibly quiet. The rubber coating on the scraper beaters cut down on bowl noise, but the motor itself was the quietest (and most powerful) of the four mixers we tested. The beaters remained firmly affixed with no shaking or extra vibrations at higher speeds or when mixing thickening doughs.

We used the scraper beaters through the mixing process until the cookie dough became too thick. At that point, we put on the dough hooks. They were effective with the cookie dough, and later when we tested bread dough, even after both became extra thick.

It's surprising how many features Breville packed into this hand mixer.

The instructions say that the Breville can knead thick dough with the dough hooks at speeds five through nine. We found level six to be more than adequate. We didn't have the Breville do all of the kneading, as the dough hooks left the dough broken and lumpy. With the cookie dough recipe, we used a wooden spoon to stir in the chocolate chips and pull the dough together. We finished kneading the bread dough by hand.

The other three models we tested had a single whisk design. All of them left us chasing egg yolks around the mixing bowl. The Breville’s double whisk design sucked eggs through without a problem, making it incredibly easy to whip eggs.

The Breville has a count-up timer that automatically starts as soon as the attachments begin moving. It works great for timing recipes with specific mixing times. We were also surprised by how much we loved the light that automatically turns on and illuminates the mix. Our kitchen has no outside windows, making it fairly dim in the evening even with full lights. The mixing light let us see how well our ingredients had combined. When we paused or shut the mixer off, the light shut off too.

Overall, this model performs better than your standard hand mixer. If you’re not ready to invest in a stand mixer, it could do many of the same jobs without a problem.

The motor itself was the quietest (and most powerful) of the four mixers we tested.

All of the Breville's attachments can be washed in the dishwasher on a normal wash cycle. The mixer itself should be wiped down by hand and cannot be submerged.

We absolutely loved the included plastic storage case. It holds all of the attachments, including the electrical cord. The mixer then snaps into place on top. We've had mixers with attachments floating around all over the kitchen, so this design was fantastic for keeping track of everything when it’s not in use.

You pay top dollar for the Breville Handy Mix Scraper, but you get what you pay for. A powerful, quiet motor and automatic torque adjustment are incredibly helpful. And, while the pause, count-up timer, and mixing light are nice, they're not absolutely necessary. However, after having used them, it would be hard to go back to dim mixing and manually timing the mixing times.

Competition: Close but not quite

Cuisinart Power Advantage Plus 9-Speed Hand Mixer: Cuisinart makes an excellent hand mixer. However, we tested them both and found it's not as powerful or quiet as the Breville, nor does it have a double whisk or automatic IQ recognition. On the other hand, you get good power, nine speeds, and a storage container for far less than the Breville.

KitchenAid 9-Speed Digital Hand Mixer: The KitchenAid that we tested is similar to the Cuisinart in power and performance. They both get louder and shake at the highest of their nine speeds. Neither the KitchenAid nor the Cuisinart has the power or the double whisk of the Breville.

Devoted chefs, baking masters, and anyone else who pulls out a hand mixer on a regular basis will love the Breville Handy Mix Scraper—it makes cooking a joy. 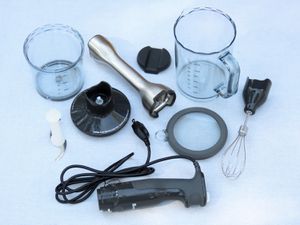 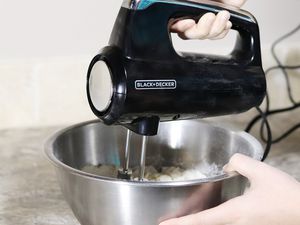 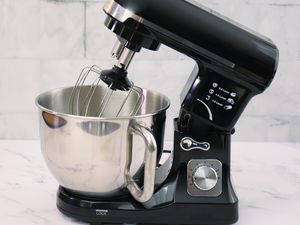 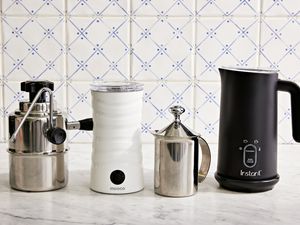