Camembert is a French cheese with a white, bloomy rind and a soft, slightly runny interior that ripens closest to the rind first. It is moderately high in fat and a rich source of protein, calcium, and phosphorous as well as vitamins A and B.

Camembert cheese originated in Normandy, France. It's made from cow's milk and is soft ripened and creamy in texture with an edible white mold rind, which is considered to be a delicacy. The flavor of Camembert can be described as mushroomy, eggy, garlicky, nutty, milky, grassy, and/or fruity. It is widely available in well-stocked supermarkets and specialty stores, and it's reasonably priced.

Camembert and brie are often grouped together because of their similarities. They can be interchangeable and are sometimes confused. Both cheeses originated in northern France, are made from cow's milk, and have soft, bloomy, edible rinds. Brie is milder, with a buttery, creamy flavor, while Camembert can be more intense in flavor, with deeper earthy notes. The textures of Camembert and brie are similar, although Camembert tends to be denser, and brie is a bit runnier.

The technique used by cheesemakers for making Camembert is similar to that used for making brie. One difference, however, is that cream is added to brie, giving it a higher milk fat percentage and creamier texture than Camembert. Brie is 60 percent milk fat, while Camembert is 45 percent.

How Is Camembert Made?

Camembert can be made from either pasteurized or unpasteurized cow's milk. The milk is mixed with a yeast culture before the milk is curdled, allowing the culture to spread and promote the development of the rind. Once the curds are formed, they are cut, poured into molds, drained of whey, and set to brine. The cheese is aged on shelves for at least four weeks and regularly turned to ensure that the mold grows evenly from the inside out while developing a creamy center. The longer the cheese ages, the softer the texture and stronger the flavor of the matured cheese.

In addition to brie, other creamy, soft-ripened cheeses with bloomy rinds, such as Saint-André, Brillat-Savarin, or Mt Tam, are good substitutes for Camembert.

Camembert is an excellent addition to cheese boards and is best enjoyed served at room temperature accompanied by fruit, nuts, baguette slices, and crackers. It bakes well, either wrapped in pastry or without, and, when baked, Camembert will be slightly stronger in flavor than baked brie. Melt slices or chunks of Camembert in gratins, casseroles, sauces, grilled cheese sandwiches, and panini, or on pizzas and flatbreads.

Refrigerate Camembert in its original packaging until you are ready to use it. Then remove from the refrigerator and allow about an hour for the cheese to come to room temperature for the best flavor and texture. After opening, wrap in the original wrapping or wax paper and then tightly wrap in plastic wrap or foil for up to two weeks.

Before eating, inspect the cheese. The rind should look fresh and white, and the disc should feel plump in its container or box. Look out for wet, slimy, or brown spots, or a withered texture.

Camembert can also be frozen for up to three months. To freeze, tightly wrap wedges in plastic wrap or foil and store in zip-close bags with all of the air compressed. Allow the cheese to defrost overnight in the refrigerator before using it within two days. The consistency may be slightly affected by freezing, so the cheese will be best suited to cooked dishes.

You can absolutely eat the rind, which is delicious and considered to be a delicacy. Sweet and pillowy soft, the rind complements the cheese well. It is this rind that gives Camembert its soft texture. The live rind breaks down the fats and proteins of the cheese, bringing about an increasingly creamy to runny texture over time.

How to Choose Your Brie Wisely 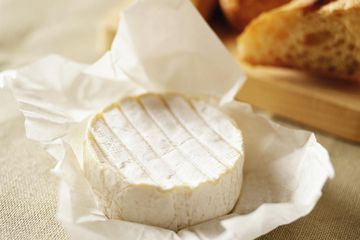