Buckeyes—or chocolate-dipped peanut butter balls—are a tasty homemade confection. These classic treats go their name because they resemble the nut of the Midwestern buckeye tree.

According to an article written for the Arizona Republic in 1983, a woman named Gail Tabor claims to have invented buckeye candy. As the story goes, years earlier at Christmas time she was trying out a new peanut butter candy recipe. She felt it didn't look just right, so she dipped it in chocolate and showed it to her husband. He declared "Hey, it looks like a buckeye."

The buckeyes were a huge hit that Christmas and for years Gail would make them for the Ohio State-Michigan football games. Eventually, the recipe was published in the Ohio State Alumni Magazine and soon everyone fell in love with these chocolate and peanut butter treats. Since they are always such a crowd-pleaser, buckeye candy is popular during Christmas, college football season, and even at weddings.

Everything You Need to Know About Melting Chocolate 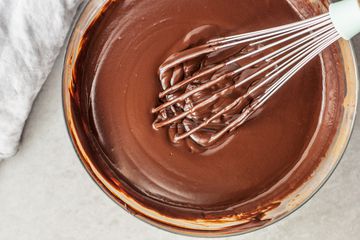 32 Recipes That Peanut Butter Lovers Won't Be Able to Resist