Most home cooks are familiar with cast iron cookware, and probably own at least one piece. It's affordable, versatile, virtually indestructible, and great for everything from searing steaks to baking corn bread.

Carbon steel pans, on the other hand, are less popular, despite offering most (if not all) the benefits of cast iron—not necessarily for less money, but perhaps with less hassle.

Let's take a look at the the two, break down the differences and what they're each good and not-so-good for. 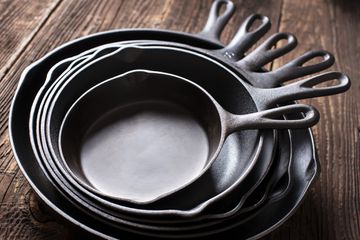 What is Cast Iron?

You might think that cast iron is made of pure iron, but it's not. Cast iron is actually an alloy of iron and carbon, just like steel, with the main difference being that cast iron has more carbon in it. Whereas steel requires a carbon content of no more than 2 percent, cast iron usually contains 2 to 3.5 percent carbon.

It's the carbon content that gives cast iron its rough, slightly bumpy feel. Its higher carbon content makes cast iron more brittle than steel (which is why it needs to be so heavy and thick—if it were thinner, it would break). And because it's a poor conductor, it retains heat for a long time (while also taking longer to heat up and cool down).

What is Carbon Steel?

Cast iron pans are wonderful to have in the kitchen for their durability, versatility, heat retention and affordability. Because they get so hot, they can sear a steak in minutes, and because they're equally safe on the stovetop and in the oven, you can sear, bake, braise and roast with them—you can even use them on the grill or under the broiler.

And when properly seasoned, they do develop a nonstick surface. Still, they'll never be the best choice for cooking eggs, and they're generally too heavy for sautéeing. Plus, if you try to simmer an acidic liquid in cast iron, like a tomato-based sauce, for instance, the acid will both break down the nonstick seasoning and impart a metallic flavor to your food.

Most cast iron pans these days come preseasoned. "Seasoning" is a nongreasy layer of oil that is bonded to the surface of the pan, which protects it from rust while also imparting nonstick properties. And while the pan itself is extremely durable, this seasoning can be scraped off if scratched with a metal spatula.

Thus, caring for cast iron essentially comes down to preserving the seasoning, which means drying it immediately after washing (to prevent rust) and giving it a coat of oil after each soap and water rinse. Keep your pan out of the dishwasher, and wash it with soap and water by hand. Contrary to popular belief, soap cannot remove the seasoning (although excessive scrubbing can).

Some cast iron pans come with an enamel coating, which makes them easier to care for, since the enamel protects the surface from rust and corrosion. The downside is that the enamel coating can crack at temperatures as low as 400 F, which somewhat defeats the purpose of cast iron. It can also chip if banged hard enough, and while it's easier to clean than regular cast iron, it won't ever be nonstick because there's no way for the enamel to build up any seasoning.

One big advantage of carbon steel over cast iron is that carbon steel pans heat up much more quickly. And because it's more conductive than cast iron, it heats more evenly, with fewer hot spots. But even with that, it is still capable of reaching temperatures high enough to thoroughly sear a steak, and can likewise be used on the stovetop and in the oven.

Carbon steel, like cast iron, also requires seasoning. The difference is, you're more likely to have to season it yourself. Which is simply a matter of following the manufacturer's instructions, and it's not difficult, but it is an extra step.

But, unlike cast iron, carbon steel pans are perfect for cooking eggs, omelets and crepes, as well as fish, which is notorious for sticking. The smoother surface plus the seasoning are what make carbon steel so slippery.

And because it's lighter, you can easily use it for sautéeing. In fact, if not for the fact that acidic foods will strip away the seasoning just like with cast iron (as well as imparting an off taste), you might be tempted to replace all your stainless steel pans with carbon steel.

Again, cleaning it is a matter of washing it gently, drying it thoroughly and applying a thin coating of oil afterward.