The Charlie Chaplin cocktail was one of the premier drinks of the Waldorf-Astoria in New York City before 1920. The equal mix of lime, apricot brandy, and sloe gin is documented in A.S. Crockett's "The Old Waldorf-Astoria Bar Book." It's a nice gentle mix with a great apricot flavor, although it can be rather thick and sweet, so be sure to give it a hearty shake.

Of course, the drink is named in honor of Charlie Chaplin (1889–1977). The famous comedic actor and filmmaker was best known for his silent films of the 1920s through the 1940s. There's little doubt that sipping this drink while watching classics like "The Great Dictator" or "The Kid" makes for an excellent movie night.

You may also be interested in a cocktail named for one of Chaplin's wives, the Lita Grey. It's a modern creation inspired by this drink, and it also includes sloe gin and apricot. The two drinks make better companions than their namesakes, who had a short, three-year marriage in the 20's.

Today's selection of apricot brandy offers an array of options that tend to fall into two camps: true apricot brandy and sweetened apricot brandy. The latter is technically a liqueur because of the sugars added. You will find many of these among the least expensive apricot brandies on the liquor shelf.

For the best Charlie Chaplin, it is recommended to seek out a true apricot brandy. These are distilled from the fruit, in the same way, that traditional brandy is distilled from grapes. They lack any additional sweeteners, and this is important. That's because sloe gin is a liqueur and it alone can easily take over the sweet aspect of this drink.

You will likely have to read the liquor labels carefully to distinguish the difference. Look for any words or phrases that indicate a sweetener or for the word "liqueur" anywhere on the bottle. If your only options are of the liqueur variety, opt for top-shelf options like Marie Brizard Apry or Rothman & Winter Orchard Apricot.

Sloe gin is a red liqueur flavored with the sloe berry, which is naturally very tart. This flavor profile makes it an excellent liqueur option because the sweetener offsets the tartness.

There are some great and not-so-great sloe gins available today, so choose wisely. As with most distilled spirits, you get what you pay for. In a cocktail like this where it has equal billing with the other two ingredients, you'll find it best to go for quality. Look for brands like Hayman's, Gordon's, and Sipsmith.

How Strong Is the Charlie Chaplin?

The two spirits used in the Charlie Chaplin vary greatly in quality and alcohol content. That makes estimating this drink's strength a little more challenging than some others.

To give you a general idea, let's assume that the apricot brandy we're pouring is 60 proof and the sloe gin is 50 proof. With that, we can say that the average Charlie Chaplin falls into the 15 percent ABV (30 proof) range. It's a relatively mild cocktail, though its sweetness can make it tempting to enjoy one too many. 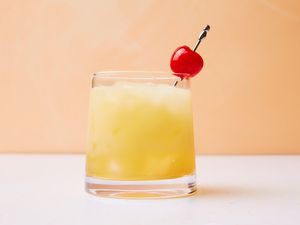