Cilantro leaves and coriander seeds are not interchangeable

Cilantro is one of those herbs you either love or hate. The distinct aroma can negatively turn people away or positively remind them of summer with its vibrant citrus smell. There are actually some people where the smell and taste remind them of soap—and for good reason. Flavor chemists have discovered that cilantro’s aroma shares some molecules with soap. But for those of us who enjoy using cilantro in recipes, there are a few things to keep in mind. First is the uncertainty with the name.

There arises a certain amount of confusion about cilantro because it is referred to by different names in different parts of the world—in some places, it is called cilantro and in others, it is referred to as coriander. To add to the confusion, there are the coriander seeds, which are part of the plant that produces the lacy green leaves but bears no resemblance to the taste of the leaves themselves. They are also used very differently in cooking and are not interchangeable with cilantro leaves. They have completely different flavors and textures—the seeds are mildly fragrant and have a flavor that is reminiscent of a combination of sage, caraway, and lemon.

To easily distinguish the two, it is best to refer to the leafy greens like cilantro and coriander as the seeds. And although cilantro is part of the parsley family—and looks very similar—you sure don't want to mix up the two, as their flavors are drastically different. It is best to take a whiff before you buy!

There is also an herb called culantro, which is not an alternative spelling for cilantro but a plant whose leaves are used in Caribbean and Asian cuisine.

When using fresh herbs in a recipe, there are some general tips to follow, such as adding the leaves toward the end of cooking to maintain the herb's color and flavor. So, when using fresh cilantro in a hot dish, add at the last minute to get the full benefit of this herb's bold flavor. It is also always preferable to use fresh cilantro when a recipe calls for cilantro leaves. Parsley may be substituted for cilantro, but the flavor of the resulting dish will be different and much milder than the original recipe's intent.

Cilantro is a necessary ingredient for many Latin dishes, particularly salsa and ceviche, as well as Asian and Indian specialties. It has an extremely pungent odor and taste and is best used with bold flavors and seasonings. In addition to salsa and guacamole, cilantro can bring a fresh vibrancy to salads, scrambled eggs, shrimp and avocado, noodles with peanut sauce, and even when muddled in a margarita.

If you are using coriander seeds in a recipe (but remember, they cannot be substituted for fresh cilantro leaves), it is best to keep a few things in mind. Coriander seeds are generally toasted before being ground to bring out their full flavor. This can be done in a dry skillet until fragrant, and then ground in a coffee grinder or food processor—one teaspoon coriander seeds equals one teaspoon ground coriander. 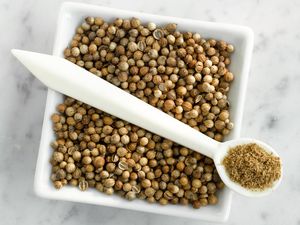 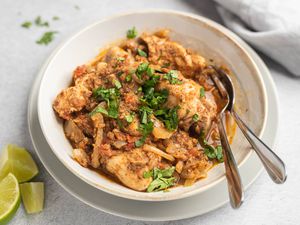 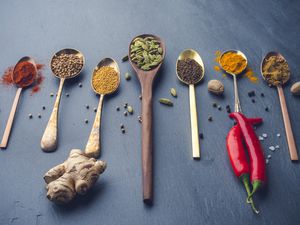 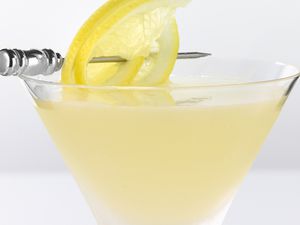