The pancake batter is based on a secret recipe from a legendary Los Angeles brunch spot, which in turn was based on a recipe for oatmeal griddle cakes handed down from the chef’s grandmother. Chewy, rich, and slightly sweet, the griddle cakes have a texture not unlike the warm gooey center of a perfect cinnamon roll. By sandwiching soft vanilla-flavored cream cheese between two pancakes and topping with warm melted cinnamon-maple butter, the cinnamon roll effect is complete. Bonus: they’re made with heaps of whole grain, so they’re not completely terrible for you.

Make sure your pan or griddle is well-heated before cooking the pancakes, and don’t be afraid to let them blacken just a touch. 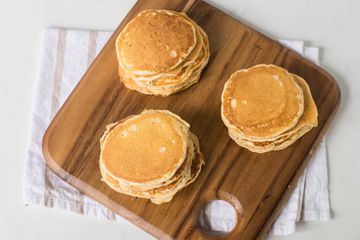