The Waldorf salad is said to have been created by Oscar Tschirky, a maitre d'hotel of the Waldorf-Astoria Hotel in New York City. The hotel opened in 1893, and the recipe appeared in his comprehensive cookbook, The Cook Book by Oscar of the Waldorf (1896). The salad was simply made with apples, celery, and mayonnaise, and it quickly became a favorite in other hotel restaurants. Walnuts were included in George Rector's recipe in The Rector Cookbook (1928). Walnuts became a standard ingredient after that. The recipe in The Waldorf Astoria Cookbook (1981) also includes nuts.

This is a classic Waldorf salad recipe with lightly sweetened apples and walnuts, brought together with a creamy mayonnaise and whipped cream dressing.

Choose this delicious salad for a Thanksgiving meal or any special dinner. We like dried cranberries in the salad because they add texture and extra flavor.

Frozen Apples Are Perfect for Baking and Applesauce 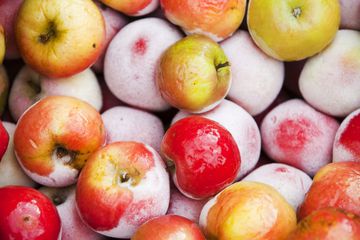 What Goes Well With Waldorf Salad?

A Waldorf salad goes well with many meat dishes, including fried or roasted chicken, baked ham, pork loin or chops, and salmon. It is a great luncheon salad as well, and a fabulous side dish to serve along with a holiday dinner.

What Is a Bound Salad?

A "bound salad" is a combination of ingredients bound together with a thick dressing, such as mayonnaise, boiled dressing, or a mayonnaise-like dressing. Waldorf salad, tuna salad, pasta salad, potato salad, and chicken salad are a few examples of bound salads.