Although a somewhat unappetizing name, clotted cream is a delicious, thick spread that is a real treat and a ubiquitous accompaniment to scones. Famously from the southwest English counties of Cornwall and Devon, clotted cream is an essential ingredient for a traditional British afternoon tea. The cream gets its name from how it develops a crust on the top during the long, slow cooking, which separates the cream. What you're left with is a thick top (the clotted cream) and a liquid underneath, which can be used in other recipes.

Finding clotted cream outside England can be difficult, but, luckily, it is extremely easy to make at home. The cream will need to cook for six to eight hours to form the crust, and one of the best ways to do this is to use a slow cooker, although a long time in the oven at a very low heat works just as well. To serve your clotted cream, all you'll need are some freshly baked scones. 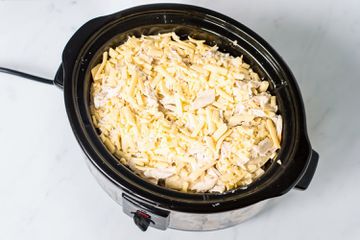 Note: There are two methods you can use to create this delicious cream: using the slow cooker or the oven.

Cooking in a Slow Cooker:

Cooking in the Oven:

The most famous way to serve clotted cream is in a Devon or Cornwall cream tea. These traditional teas involve light, fluffy, freshly baked scones with layers of butter, jam, and clotted cream. The order in which the jam and cream are piled on may vary from county to county, but they all taste delicious.