Crème fraîche (pronounced "krem fresh") is a thick, cultured cream with a smooth texture and a slightly tangy flavor that is popular in French cuisine. It can be used is savory and sweet applications and served as-is or cooked. Crème fraîche is a popular ingredient in sauces as well as pastas, soups, dips, and baked goods.

Crème fraîche and sour cream can often be used interchangeably in recipes with similar but not identical results. Crème fraîche is less tangy and often less thick than sour cream, with a much higher fat content and therefore richer taste. This makes it popular for topping desserts like apple tarts, while plain sour cream is too tart for many palettes. Sour cream's thickness and flavor make it a good option for decidedly savory dishes like dips and tacos, but can also add a nice contrast to baked goods like sour cream pound cake. It often contains stabilizers, which crème fraîche typically lacks.

Everything You Wanted to Know About Sour Cream 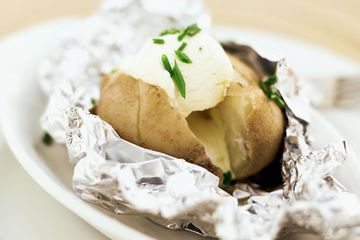 How to Cook With Crème Fraîche

Crème fraîche can be used as-is for a number of dishes or can be whipped so that it better resembles whipped cream. This is a nice option for dessert applications such as topping pies or cakes. You can also make your own crème fraîche at home using heavy cream and a small amount of buttermilk. After heating the cream and adding the buttermilk, the mixture is left to sit at room temperature overnight to thicken.

Crème fraîche has a richness similar to heavy cream and a tanginess similar to sour cream or yogurt. It lacks the bite of sour cream, making its subdued flavor more easily applicable to an assortment of sweet and savory dishes. It can vary in thickness, but is thicker than heavy cream and less thick than sour cream. It has a luxurious texture and mouthfeel thanks to its high fat content. Crème fraîche compliments a variety of flavors nicely, from sweet fruit to mild fish to fresh herbs.

Depending on the recipe, there are a few good substitutes for crème fraîche. Marscapone cheese is a good option if you're seeking a less tangy flavor, especially in desserts. You may need to add a bit of milk or heavy cream to thin the cheese a bit, depending on the use, and a small amount of lemon juice can be added to add tartness. Mexican crema is very similar to crème fraîche but tends to be thinner. Use it in dishes where the thickness is not an issue. Sour cream is a natural swap in cool or warm sauces and dips, just keep in mind it is tarter and contains less fat. Yogurt can also be used with a similar caveat.

Note that crème fraîche is sometimes called for in sauce and soup recipes and cooked over high heat. Because crème fraîche has a high fat content, it will not curdle. When swapping for other ingredients, you may want to add them when the mixture is cooking at a lower heat to prevent curdling.

Crème fraîche can be utilized in a variety of ways in both sweet and savory dishes. Try using it to top desserts, to make a decadent dip, in sauces for fish and meat, or to add creaminess to soups, pastas, and potatoes.

Where to Buy Crème Fraîche

Look for crème fraîche in the dairy aisle at fine supermarket and groceries. Although it isn't uncommon to find in your local grocery store, it is a bit of a specialty item. It's more likely to be found in gourmet markets and cheese shops. Look for it in plastic tubs similar in size and shape to sour cream. Several good brands are imported from France, but a number of high-quality American dairies and cheese makers produce their own. Try a few different brands to find your favorite.

The shelf life of crème fraîche will vary depending on if any preservatives have been added. An unopened container will keep for about eight weeks in the fridge—double check the sell by date before purchasing. Once opened, store crème fraîche in the refrigerator in its original container with the lid on tight. It will keep for a week or two. If any mold appears, discard immediately.