Thanksgiving is a holiday for family and friends and delicious traditional food. And it's probably the first time in the season that most people break out the cranberries. If you grew up with the canned jellied cranberry sauce, you probably love it but you probably also don't use it for anything other than the main Thanksgiving meal and maybe on some leftovers and sandwiches the next day.

But if you're a fan of the chunkier sauces, filled with actual cranberries, then homemade is the right choice for you. And the great news is that it's remarkably easy to make homemade, from scratch, cranberry sauce. Not only that but it's simple to customize it with more or less sugar, some extra citrus flavor (lemon zest is amazing in this recipe) and some warm spices like cinnamon and cardamom.

Even greater news is that this sauce has way more uses than just the typical holiday table accompaniment to the turkey and stuffing. It's as versatile as any chutney or fruit preserves would be. So, by all means use it as a sandwich topper but also use it in desserts and as an ice cream topping. And definitely swirl it into yogurt for breakfast. But don't stop there where the yogurt is concerned. Strained yogurt becomes soft labneh cheese that, coupled with the cranberry sauce, makes an amazing dip for your holiday company. 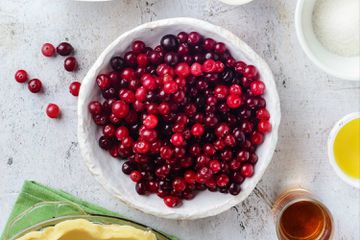