A handy grill, griddle, and panini press in a compact package

Anyone who is looking for a compact grill, griddle, or panini press should take a close look at the Cuisinart Griddler. It does all that and more and is very easy to clean when cooking is done.

We purchased the Cuisinart Griddler so our reviewer could put it to the test in her kitchen. Keep reading for our full product review.

The Cuisinart Griddler boasts the ability to work as an indoor grill, a griddle, and a panini press, but does it do all three jobs well? We used it to cook breakfast, lunch, and dinner, testing both the flat and ridged plates, and we enjoyed the results. While we’re not getting rid of our outdoor grill for cooking steaks on a sunny day, we appreciated the ease of using the Griddler, as well as the simple cleaning of the grill plates in the dishwasher. Read on for all the juicy details about this top-rated kitchen tool.

The 11 x 9-inch reversible grill plates need a quick wash and rinse before the first use, and setting up the appliance for cooking is just as simple: Just turn the center dial to choose “griddle” for flat cooking or “grill/panini” for closed-top cooking. The left dial controls heat for griddle cooking, while the right dial controls the heat for grilling or panini cooking.

Performance: It gets the job done, no matter what you choose

The Griddler is said to perform five different functions: as a contact grill, panini press, full grill, full griddle, and half grill-half griddle. For our first test of the Griddler, we laid it flat as a full griddle (with griddle plates up) to cook onions. While this task seems simple, it’s harder than it looks; the onions need to cook slowly, without fast browning. We were happy with the performance since we could set the temperature, and it remained constant.

We appreciated the ease of using the Griddler, as well as the simple cleaning of the grill plates in the dishwasher.

While the Griddler isn’t huge, we were able to cook a full pound of sliced mushrooms on one side while we cooked zucchini on the other, and we could easily cook two sandwiches at once. The bottom side tended to cook at a higher temperature than the top, but it was easy enough to flip foods over. When using it as a contact grill, it gave us good grill marks and did a fine job with steaks, burgers, and more.

The nonstick surface is very nonstick, and even burned-on cheese slid off easily, making cleanup a breeze. The plates are removable, and we washed by hand and in the dishwasher and got good results both ways.

Design: Packs a lot in a little space

A relatively compact grill, this does a lot in a small space. The double-sided, nonstick-coated aluminum grill plates allow for both grill and griddle cooking (and customers can also order the optional waffle plates as well). The controls on the brushed stainless steel housing are easy to understand, and the large panini-style handle is far enough from the lid so it stayed cool during cooking.

We liked that we could open the Griddler flat to have two different cooking surfaces.

The lid hinge “floats,” so it can remain at the same angle to the bottom surface. While that hinge worked the way it was supposed to, we sometimes had to adjust it manually, particularly when cooking sandwiches.

We liked the idea that we could open the Griddler flat to have two different cooking surfaces, and we could choose grill or griddle plates for each half. Even when we were using the griddle plates on both sides, having separate cooking surfaces gave us the option to cook with butter on one plate and oil on the other. Likewise, we could use different sauces on each side without the flavors mingling.

The one odd thing we noted when cooking with the Griddler in its flat configuration was that one side sat at a slightly steeper angle than the other. While some might consider that a flaw, we discovered it was a benefit for some cooking sessions: For example, we could cook eggs or pancakes on the flatter side, and they wouldn’t run off the griddle. Meanwhile, we could cook sausages on the other half, and the grease drained more efficiently.

This grill/griddle has a large drip tray that sits completely under the unit where it’s out of the way, and it catches liquids that drain from the grill whether it’s open or closed. There’s plenty of space to collect liquids, and it’s easy to remove and clean. Since the drip tray is hidden, it gives the Griddler a smaller footprint and a neater appearance, but that also means it’s easy to forget about when it’s time to clean up. We had to remind ourselves to double-check the drip tray before storing the appliance.

The hidden drip tray gives the Griddler a smaller footprint and a neater appearance, but that also means it’s easy to forget about when it’s time to clean up.

Price: Affordable and worth it

The least expensive of the Griddler line (which also includes the Griddler Grill & Panini Press and the Griddler Deluxe), this is a very affordable little grill that gets the job done without a lot of fancy extras. The dials are simple controls with lights that let you know they’re in use, but it cooks efficiently despite the lack of frills. It does a lot, and it does it well.

We feel we’d be doing a disservice if we didn’t mention the Griddler’s big brother, the Griddler Elite. The Elite has the same features as the basic version we reviewed, but with a few extras that we found appealing.

The heating elements in the Elite are inside the plates for more efficient heating, and the temperature of the grill plates can be controlled independently. But the one extra we found most interesting was the ability to set the lid above the surface of the food, so you can heat without contact. While that might not be something you’d need every day, it would be great for cooking open-faced sandwiches or reheating pizza slices. At twice the price of the standard Griddler, the Elite is more of an investment, so it’s only worthwhile if those extra features are must-haves.

We were happy with the results

Overall, we liked the Cuisinart Griddler a lot. It performed well on all the tasks we threw at it, and we particularly enjoyed using it for sandwiches. The griddle option makes it so much more versatile, so it can be used as an extra space for cooking when your stove is too full for another pan. 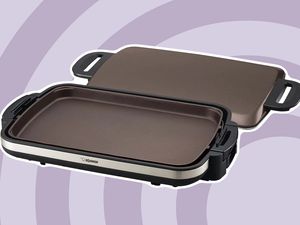 The 5 Best Smokeless Grills of 2022, Tested and Reviewed 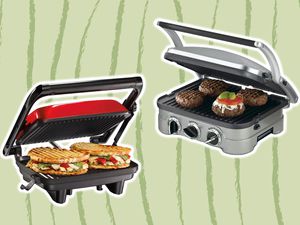 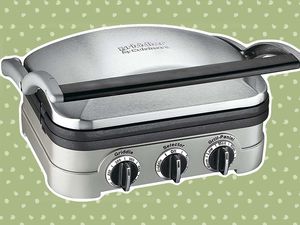 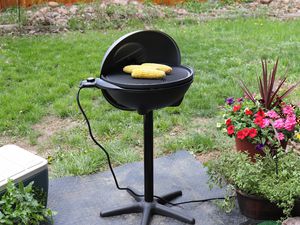 The 7 Best Electric Grills of 2022, Tested and Reviewed 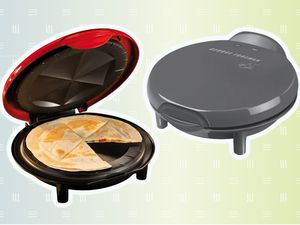 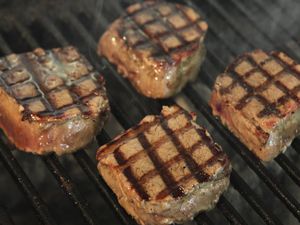 The Difference Between a Grill and Griddle 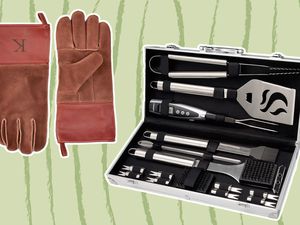 The Best Grilling Gifts in 2022 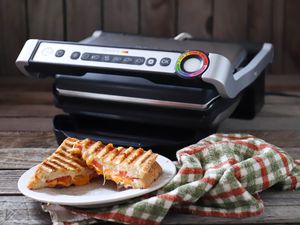 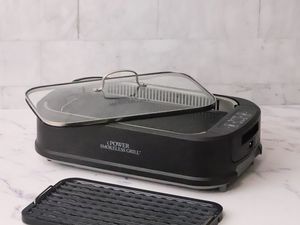