Deep-fried foods are golden, crispy and delicious, but many home cooks (even experienced ones) often make the mistake of using the wrong cooking oil for deep-frying at home.

The result of that can be off-tasting or even burnt food, a smoky kitchen, and (depending what type of oil they bought) an empty pocketbook.

Unlike other applications, like baking, making a salad dressing, or even sautéeing—where you can often get away with using any oil you like—deep frying presents unique challenges.

Let's take a look at the factors that go into choosing an oil for deep frying, and what your best overall choice should be.

7 Tips for Deep-Frying: How to Get the Crispiest Food Ever 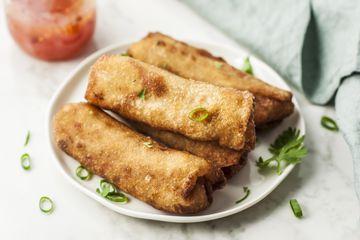 The main issue is choosing an oil with an adequate smoke point. Cooking oils and fats react differently to heat, but in general, the hotter they get, the more they break down and eventually start to smoke.

That means that certain oils are better for deep-frying than others. The temperature at which a given oil will start to smoke is called its smoke point. A high smoke point means that an oil can be heated to a relatively high temperature before it starts to smoke.

If you cook with oil that's heated past its smoke point, it will impart a burnt flavor to your food. But also, heating your oil too far beyond its smoke point could possibly start a fire. Here's a list of cooking oils and their smoke points.

But knowing the smoke points of various oils won't help you without also knowing the basic temperature at which most foods are deep fried, which happens to be 350 to 375 F.

At these temperatures, your breaded or battered foods will turn crispy, and golden brown. This is due to a process called caramelization, which causes carbohydrates like starches and sugars to turn brown when heated to temperatures of around 320 F.

Therefore, a cooking oil for deep frying should have a smoke point of at least 375 F, although in reality, because smoke points do not remain constant of the life of an oil, you should stick to oils with smoke points of at least 400 F. This rules out most unrefined oils, like extra virgin olive oil (smoke point 375 F) or unrefined coconut oil (350 F), as well as vegetable shortening (360 F) or lard (370 F). The smoke point for whole butter, by the way, is about 250 F.

Another factor is the degree of refinement of a given oil. The more refined an oil, the higher the smoke point.

That's because refining removes the impurities that can cause the oil to smoke. A simple rule of thumb is that the lighter the color of the oil, the higher its smoke point.

Finally, it's important to note that any given oil's smoke point does not remain constant over time. The longer you expose an oil to heat, the lower its smoke point becomes.

Also, when you're deep-frying food, little bits of batter or breading will drop off into the oil, and these particles accelerate the oil's breakdown, lowering its smoke point even more. So in general, fresher oil will have a higher smoke point than oil you've been cooking with for a while.

The last factor you might consider is whether a given cooking oil is more or less healthy. The good news is that all cooking oils that are liquid at room temperature are pretty good for you. So your choices really come down to choosing ones that are healthy versus very healthy.

The oils with the highest polyunsaturated fats are sunflower and safflower oil, both of which have smoke points in the range of 450 to 500 F for their refined versions.

The oil with the lowest level of saturated fat happens to be canola oil, whose smoke point of 425 to 475 F makes it an excellent choice for deep frying.

Lastly, there is the issue of cost, since for deep-frying, you might be using anywhere from two cups to two quarts of oil at a time. And yes, you can reuse your oil, but that's still quite a lot of oil to buy as an up-front expense.

Refined sunflower oils and safflower oils are good choices healthwise and also in terms of their smoke points, but they can cost $10 a quart or more. Avocado oil, with a smoke point of 570 F, is even more expensive.

Canola oil, on the other hand, is widely available and can be had for $2 to $3 per quart. Its high smoke point and low level of saturated fat make it a compelling choice. And because it is neutral in flavor, it won't impart any additional flavors to your food. Which means that by any measure, whether it's smoke point, health or cost, canola oil is the best oil for deep-frying.