Lager is the most common type of beer in the world. The bottom-fermented techniques used to brew it result in a crisp, refreshing beer, though it's a surprisingly diverse group. Lagers include many of America's famous beers, including Budweiser, Busch Lite, Coors, Miller Genuine Draft, and PBR. The style goes far beyond those big names and includes all of the great Bavarian pilsners, as well as bocks, dunkels, and Oktoberfest.

What Is the Difference Between Lager and Ale?

The primary definition of a lager is that it is a bottom-fermented beer. The yeasts used to ferment the beer flocculate (gather) at the bottom of the fermentation tank. Ales are just the opposite and use yeasts that are top-fermenting.

Lager yeasts can also tolerate much lower temperatures than yeasts used for ales. Typically between 45 and 55 degrees Fahrenheit, these lower temperatures reduce the number of by-products during the fermentation stage and produce a cleaner, crisper beer.

The more tolerant lagers can handle longer aging times than ales. Called "lagering," these beers can be aged for months at much lower cellar temperatures (54 to 57 degrees Fahrenheit).

Lagers are also a younger beer. Hops were introduced to brewed alcoholic beverages in 1000 A.D. and primarily produced ales. Lagers were discovered by accident in the 1500s when it was found that storing brews made with cold-resistant yeast for a month produced a crisper beer. Even in a historical lager-brewing region like Bavaria, the famous hoppy German pilsners are a 19th-century discovery. The other famous Czech and German lagers are not much older than that.

Lagers are a tighter group of beers than ales. While there are countless styles of ale, there are only a few styles within the lager family. Generally, the characteristics of a lager include a light, crisp taste that is mellow and smooth. They also tend to have more carbonation than ales and are less bitter. Some, however, are quite different. Bocks have a great barley flavor and can range from amber to dark brown in color and Oktoberfest and dunkels are known for their malty flavors. 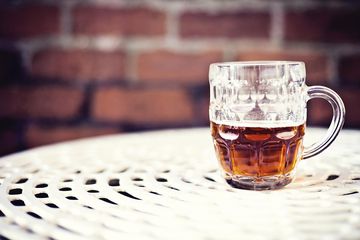 Since lager is a brewing technique, it includes many styles of beer. From dark to pale and malty to sweet, they're diverse, so there is a lager style for every beer drinker's taste.

Dunkel is German for "dark" and it's a classic pub beer from Bavaria, specifically the Munich area. The original lager style, it's made with dark roasted malts with a red-tinted color from amber to mahogany. The flavors include nuts, bread, coffee, and chocolate marked with the characteristic lager crispness and a delicate hoppiness. The alcohol content and bitterness is relatively low.

Another dark German lager, Schwarzbier originates from the eastern state of Thuringia. This rarer style is characteristically dark chestnut to ruby-black in color with a complex taste featuring roasted malt and bitter chocolate and licorice. It has a dry, smooth finish, low alcohol content, and mild bitterness.

Czech lagers are diverse, enjoy a tradition as rich as German beers, and rare outside of Europe. Graded by color and alcohol content, they include the pale světlé (a pilsner), the amber polotmavé, the dark tmavé, and the black černé. The alcohol content ranges from 3 percent to 9 percent ABV, though the country measures strength using the Plato scale, which is expressed in degrees.

Pilsner is the pale beer that defines the essence of a lager. Czech pilsners are golden and full-bodied, a result of floor-malted barley. German pilsners use delicate and spicy hops, producing a thin, light color that tastes "cleaner." All pilsners are noted for their refreshing crispness, low-range alcohol content, and delicate bitterness.

Helles (or hell, meaning "bright" or "pale") lagers are similar to pilsners, but with more emphasis on a soft malt flavor. The southern German pale lager is golden with a mildly sweet, light hop profile, full-body, and low bitterness and alcohol.

Most famous among the amber lagers, märzenbier (March beer) is well-known as Oktoberfest. These beers are simultaneously sweet and crisp, a characteristic of a specific blend of hops. Vienna lagers are similar but use a lighter roasted malt than the Munich-derived märzens. Most (including Dos Equis and Sam Adams Boston Lager) is brewed in North America today. Amber lagers tend to be slightly stronger, averaging around 5 percent ABV.

Strong, malty, and warming, bocks are German sipping beers. A number of sub-styles are included, such as light-colored and creamy maibocks (or pale or helles bocks), dark and rich doppelbocks, and sweeter, almost chocolaty, dark and American bocks. Most are at least 6 percent ABV but can reach 10 percent. Eisbock is the strongest and most flavorful, with an average of 9 percent to 13 percent ABV due to freeze-distillation.

The general term "mass-market lager" describes easy-drinking pilsners that are adapted to appeal to the masses. The golden color and white head remain, but these lagers don't have the full body or hoppy flavor of a pilsner. They are often simply labeled "lager." Produced worldwide, this style includes most of the big-name beers, such as Budweiser, Pabst Blue Ribbon, Stella Artois, Pacifico, Foster's, Sapporo, Beck's, and Heineken.

How to Serve Lager

With very few exceptions, it is generally recommended to serve lagers cold. Bocks are the exception and often best when served closer to room temperature.

It's common to serve dark lagers and mass-brewed beers in a mug or pint glass, and pilsners in a pilsner glass. Helles and amber lagers are frequently poured into steins, while a stemmed goblet (pokal) is traditional for bocks. With all lagers, tilt the glass to a 45-degree angle and pour slowly to produce a head that's about two fingers tall.

In general, lagers are an excellent choice for food pairings. Amber lagers are possibly the most versatile and best option. They go particularly well with pizza, burgers, and other pub favorites, as well as Mexican fare, roasted chicken, beef stroganoff, and hearty chilis and even macaroni and cheese. Pilsner and other pale lagers are perfect for light foods like salads and herb chicken or pasta dishes. They're also a great choice with German favorites like bratwurst and schnitzel, though not great for dessert.

Bocks are fabulous for spicy foods as well as chocolate desserts. American lagers are famous for accompanying barbecue classics, while other big-name lagers are ideal with food from their country of origin. For instance, serve Mexican lager with tacos or burritos, Italian lagers with pasta, and Japanese lagers with tempura.

There are simply too many lagers on the market to list, but these are among the best-known not already mentioned.