The Doberge cake, a version of the famous Dobos torte, is New Orlean's very own birthday cake. The traditional Dobos torte originated in Hungary in the late 1800s when C. József Dobos, a delicatessen owner in Budapest, strived to create a cake that required no refrigeration. The New Orleans Doberge cake was adapted in the 1930s by bakery owner Beulah Ledner. The caramel topping would not fare well in the South's hot, humid weather, so it was replaced with buttercream and fondant or ganache coating. Instead of the buttercream filling, Ms. Ledner filled the cake with custard. 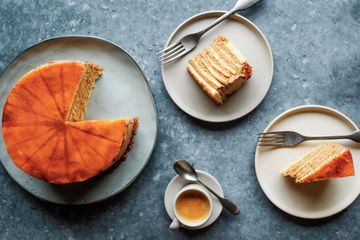 The following New Orleans version of the elegant Doberge cake is layered with both lemon and chocolate fillings, then topped with chocolate buttercream and a layer of ganache. Feel free to decorate the cake as you like or leave it plain. The beauty of this cake is in the many filled layers.

Note: while there are multiple steps to this recipe, the instructions are broken down into workable categories to help you better plan for preparation and cooking.