How Drambuie Liqueur Is Made and How to Use It

Drambuie is a sweet, gold-colored liqueur with a Scotch whisky base that is accented with the flavors of Scottish heather honey, herbs, and spices. It's produced in Scotland and has become a staple in bars across the world.

Drambuie's popularity is largely attributed to the rusty nail cocktail in which it's paired with scotch. The Prohibition-era cocktail took the edge off bootlegged whiskey and helped introduce U.S. drinkers to the newly imported liqueur. The fact that it was a favorite drink of the Rat Pack (Frank Sinatra, Dean Martin, Sammy Davis Jr., etc.) helped propel the rusty nail and Drambuie to the fame they retain today.

Two liqueurs from Scotland, both Drambuie and Glayva have a Scotch whisky foundation and are sweetened with honey and flavored with herbs and spices. They are comparable in flavor, though decidedly different. Drambuie's flavor is more focused on the scotch and honey where Glayva is softer in that profile, allowing the tangerine and herbal bouquet to take center stage. Think of it like a flavored whisky versus an herbal liqueur.

There are no true substitutes for Drambuie's signature taste. The closest options are Glayva or, if you can find it, Chivas Regal's Lochan Ora. Another good choice is sweetening scotch (or another whiskey) with a bit of honey or Frangelico. In some recipes, Bénédictine may work, though that's more botanical and doesn't have a whiskey background. Other recipes may do well with a quality amaretto—that switch in a rusty nail creates a godfather cocktail.

What Is Drambuie Made From?

The story of Drambuie dates back to around 1745 when Prince Charles Edward Stewart (aka Bonnie Prince Charlie) passed on the "secret" formula for his personal elixir while fleeing Scotland after the Battle of Culloden. The legend says that the recipient was Stewart's trusted Captain John MacKinnon and that it remained on the Isle of Skye.

During the late 19th century, Clan MacKinnon passed the recipe on to James Ross who improved it. He sold the revised liqueur at the Broadford Hotel on Skye, which continues to claim it is the "birthplace of Drambuie." Upon Ross' death, his widow sold the recipe to another MacKinnon family and the first commercial production of Drambuie began in Edinburgh in 1909. Today, the blending facility is located near Glasgow, Scotland and Drambuie is owned by William Grant & Sons.

The name Drambuie is derived (most likely) from the Scottish Gaelic an dram buidheach, which means "the drink that satisfies."

Reportedly, only three people in the world know the Drambuie recipe and one of those is responsible for blending it. The brand doesn't reveal too much about its production, either. The whisky is a blend of malts from the Speyside and Highland regions of Scotland. This is then sweetened with Scottish heather honey and infused with herbs and spices. Drambuie is bottled at 40 percent alcohol by volume (ABV, 80 proof).

Exactly which or how many herbs and spices flavor Drambuie is a complete mystery, but cloves and saffron are most likely included. There have been attempts to replicate it in homemade recipes. Though they're never a perfect match, many people include angelica root, fennel, rosemary and, on occasion, lemon zest.

Drambuie is both perfectly sweet and delightfully complex. The liqueur has a superbly smooth taste, notably marked with spiced honey. You'll find notes of anise, orange peel, and oak. It is bold compared to other liqueurs and the whisky element is not subtle.

Beyond the original bottling of Drambuie, two other expressions have also been released. Both are preferred to be served neat or over ice.

How to Drink Drambuie

The scotch base makes Drambuie a perfect drink on its own. Serve it straight, on the rocks, or in an ice-filled glass topped with club soda, ginger ale, or ginger beer. It sometimes replaces the whisky in Scotch coffee and makes a wonderful dessert drink or soothing nightcap. Drambuie is also an excellent cocktail ingredient, contributing its complex flavor to a number of recipes. It's often paired with its natural companion, scotch, though it works just as well with Irish whiskey and other styles. You will find in brandy and tequila cocktails as well.

Drambuie's unique flavor makes it an interesting cocktail ingredient. It's not used as often as other liqueurs, but a number of recipes rely on it. Its association with the rusty nail is so strong that if you see either of those words in a drink name, it may include Drambuie.

Like many liqueurs, Drambuie can be incorporated into food. It's often an option alongside side scotch in Scottish desserts like trifles and clootie dumplings. Ice cream, cakes, puddings, marmalades, and porridge are other popular uses. The liqueur also makes an interesting addition to barbecue sauce, fruity sauces for fish, and savory chicken and red meat marinades. 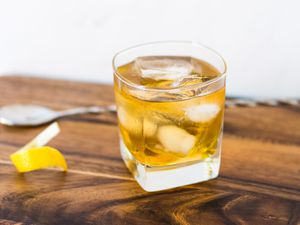 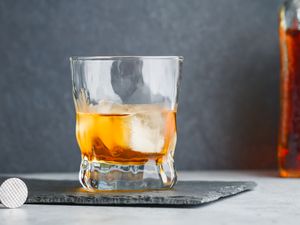