And we haven’t even started to talk about Edy’s mezzes. 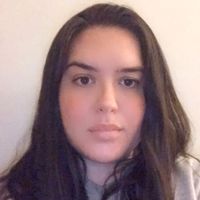 Amanda Celestino
Amanda is a freelance food writer, editor, and occasionally a recipe developer with ten years of experience. She truly believes everything tastes better at room temperature.
Learn about The Spruce Eats' Editorial Process

This interview is a part of The Spruce Eats’ partnership with the Queer Food Foundation, where we’re highlighting queer people in food and how they’re reimagining the future of their industry.

How do you build a neighborhood mainstay? For Edouard Massih, who goes by Edy, it’s about spotting the need—and the opportunity. Massih, who was born in Lebanon and moved to Boston with his parents at age 10, settled into a catering career in New York City after attending the Culinary Institute of America in nearby Hyde Park. But in 2020 during the pandemic, Massih learned that in his adopted neighborhood of Greenpoint in Brooklyn, the owner of a longtime Polish market might retire and hand over her space to him. Massih took her up on it and within weeks, he’d not only launched a Lebanese specialty store, Edy’s Grocer, but he’d planted a flag for queer business ownership in a neighborhood with, he says, surprisingly little queer visibility. 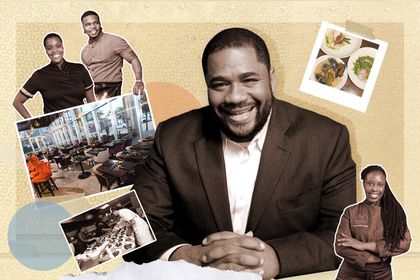 Edy’s Grocer sells imported dry goods like spices, pasta and grains, nuts, and more, but the real magic comes from the kitchen, where Massih reinvents the Lebanese dishes he grew up on. It’s an all-day celebration of Middle Eastern flavors, including breakfast specialties like baked za’atar eggs and tahini overnight oats, midday salads like kale tabbouleh and fattoush, and mezzes ruling the evening from nearly two-dozen options including babaganoush, spicy tomato jam, and marinated feta.

We chatted with Massih to learn more about Edy’s Grocer—and how it’s been to stand out as a Middle Eastern queer food business owner who puts food and community together every day.

What inspired you to open Edy’s Grocer?
It wasn't a dream thing whatsoever, it was out of necessity. In 2020, I had to shut down my catering company, and you know, I went insane. I love to work. What am I going to do now?

I had built a good customer base in Greenpoint, but I was having a hard time finding ingredients to make all the food. I decided to write a business plan to open up a Middle Eastern grocer in Greenpoint. I’m really good friends with Maria from Maria's Deli, which was right around the corner from my place. I had been living there for five years, and she had been occupying her space for 43 years! She was like my Polish grandmother in a way, and she’d told me that her space was mine when she retired. So I called her and I was like, ‘Listen, would you want to retire now?’ She called back after two weeks and said, ‘Alright, I'm ready to do it,’ and I just went for it! I signed the lease and I did this all on my own. I had money saved for my catering days. I flipped the place in six weeks.

Have you always loved cooking?
I was born and raised in Lebanon and moved to America when I was 10 years old. Growing up in the Middle East, every meal, every holiday was surrounded by food. My parents taught me so much about hosting and gathering. I knew I wanted to be in the kitchen.

Is your menu true to the traditional Lebanese recipes you grew up with?
Nothing I make is like how my grandmother made it—she spent all day and all night cooking! Everything that I do has a modern twist to it but a lot of my cooking style comes from what I grew up with, what my grandmother and mother would make, or from street food I ate in Lebanon.

What are your favorite products or items on the menu you sell in the store?
Among what we make, my favorite products are the mezzes—people love them! They’re our biggest sellers. And I've had a lot of fun coming up with all of them. I love the spicy tomato jam and the marinated feta. For Pride this year, we did a collaboration with James Park that’s a chili crisp labneh dip, and it was to die for—we gave $1 from each sale to the Ali Forney Center, which provides housing and support for unhoused LGBTQ+ youth. 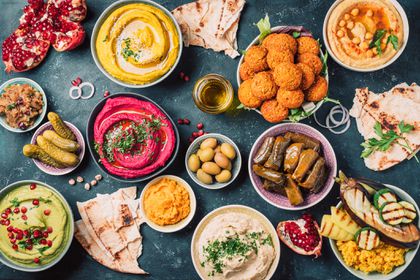 How have you brought queerness to Edy’s Grocer?
It's weird because Greenpoint doesn't have that many queer spots. If you walk around the neighborhood, there isn't that much representation, there isn’t even a gay bar, which makes me sad. I think I've added queerness by literally hanging a gay flag up! We're very loud and proud, and that's just my way of adding to the community. Being a Lebanese person, born and raised there, and being outspoken about being gay, I think that has a lot more to do with it than the community here [in Brooklyn]. It took a lot out of me to get my family to accept that and to be able to go on national TV and say things that can be shocking to my family. But it's like I've done it, and now they know.

What's the impact of being an openly queer business?
Middle Eastern boys in Lebanon need a person to look up to. When I moved to New York City, I looked up to Andy Baraghani; he has a big spotlight and also is gay from a Middle Eastern background. I feel like I can be that voice for young gay chefs, and maybe not even just young gay men in Lebanon or the Middle East, that's important to me. To inspire people overall—it's a journey to be loud and proud and to keep changing and making strides and teaching people things that they don't necessarily believe in or understand. There is not a lot of Middle Eastern queer representation, so it matters a lot.

What’s next for you?
I'm currently writing my cookbook, Keep It Zesty—it comes out in the spring of 2024. It’s a long ride; I’ve been testing recipes since early summer. We're opening up shop number two in October [in Manhattan]. We started doing dinners at the grocer this past January. We're doing one dinner per month, teaming up with different chefs. In June, we did Korean Lebanese—we've done all sorts of fun collabs. At the end of the day, as much as I love the store, it's not like what I love to do, I love catering and cooking—so more of that!