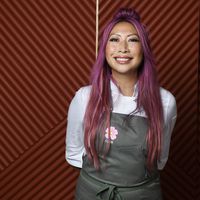 Clarice Lam
Clarice is a pastry chef with over a decade of writing and creating recipes. Having lived in Los Angeles, San Francisco, Orlando, and NYC in the United States; Canada, Hong Kong, The Philippines, Mexico, South Africa, France, Spain, and the UK, Clarice has had a lifetime of studying cuisines from around the globe.
Learn about The Spruce Eats' Editorial Process

When trying to source all the ancient Chinese secrets and intel for this story from my parents, there was a lot of bickering. My father, Simon Lam, was raised traditionally Chinese while my mother, Margaret Lam, was raised in British-ruled Hong Kong and attended high school in Canada, where the two would later meet in university. The one thing they could agree upon is the absolute importance of celebrating Lunar New Year in our culture.

My story begins with my grandmother, Wong Yuk Hop, 王玉匣. Wanting a better life for her children after my grandfather left his family to return to the Philippines, she decided to escape then-communist China. Through a long and arduous trip by way of mountains and on a wooden raft, she navigated herself, my dad, and my uncle safely to Hong Kong.

In 2019, in honor of my grandmother’s journey, my family and I took a trip to see the Fujian village where my dad was raised. The tiny village, lined with dirt roads and concrete block homes, was an impressive reminder of how hard my dad worked to provide the American dream for us. We visited long-lost relatives and saw how they lived, some without doors, electricity, or plumbing. There were chickens, lots of chickens, clucking away like guard dogs. My distant cousin offered me fresh pigeon eggs from the rooftop roost as a token of respect and gift for the new year to come. They had so little materially, yet their souls were unbothered and so full.

Returning from the trip to the tiny village, I felt traitorous staying in a nice hotel after seeing how my relatives lived. Regardless, my father would not let Lunar New Year’s Eve pass without ceremony. My sister and I came out of the bedroom to our dad rummaging around our hotel suite. We thought to ourselves, “Oh boy, here we go again…”

In anticipation of the new year, my dad was crumpling up newspaper in a wastebasket he had placed in the middle of the living room area. “Dad! We’re in a hotel room, hello?! We can’t do this here!” I exclaimed. My dad ignored me and lit the newspapers on fire, simply saying, “Alright, go!” My sister and I looked at each other and laughed, partly because of the sheer ridiculousness of the situation, and partly because we were nervous about burning down the hotel. As the tradition goes, we each quickly proceeded to jump over the fire back and forth three times before he put it out. Only then had we officially burned away all the bad luck from the ending year so we could enter the new year “so fresh and so clean.”

"The one thing they could agree upon is the absolute importance of celebrating Lunar New Year in our culture."

There are many Chinese new year traditions that center around getting rid of bad luck and bringing in good luck. One ritual that has been etched into my brain since childhood is cutting my hair before New Year’s Day, again to cut off all the bad luck. There’s also no cleaning or sweeping on New Year’s Day so as not to get rid of your fortune, and plenty of fireworks right after the stroke of midnight to scare the devil away.

There are plenty of food related superstitions that are of the utmost importance during Lunar New Year. The word for fish in Cantonese, “yu,” sounds like the word for extra or abundance, so on New Year’s Eve fish is eaten to symbolize that you will have extra wealth at the end of each year. This also carries over to New Year’s Day when you will still eat fish to ensure the wealth continues.

Other notable auspicious holiday foods include: dumplings because they look like money pouches; shrimp, called “ha” like laughter, brings happiness; “lin go,” a sweet glutinous rice cake, which translated sounds like “high year," symbolizing movin’ on up; lettuce, called “sang choi” in Cantonese, translates to growing wealth; black moss, or “fat choi,” means prosperity and is frequently paired with dried oysters, or “ho si,” meaning “all the good things”; pigs’ feet, but specifically the hands or “ju sao,” helps you to grab money easily in the new year.

Now, since  not everyone, understandably, is dying to eat pig hands or black moss, I have created two special recipes to help ring in the new year—pineapple tarts and Chinese barbecue pork jerky. Pineapple, or “ong lai'' in Hokkien, translates to “fortune come”. Originating in the same province my father was born in, and as a resourceful way to preserve hard to come by meat, barbecued pork jerky was considered a luxury. 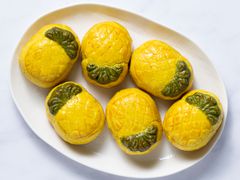 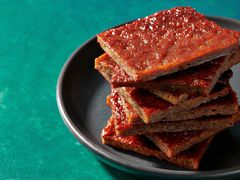 During my childhood Chinese New Year felt almost like an obligation rather than a celebration. Then, as an adult, I treated it like any other day of the week. Now I view Lunar New Year as a privilege, a way to honor the traditions and culture of my ancestors. It is also an excuse to celebrate with delicious food, friends, family, and welcome good vibes and prosperity for the new year.

Wishing you all great happiness and prosperity—GUNG HAY FAT CHOI! 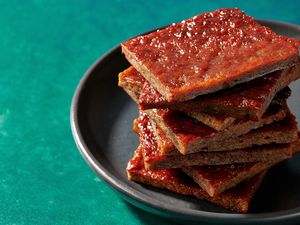 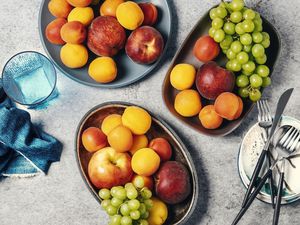 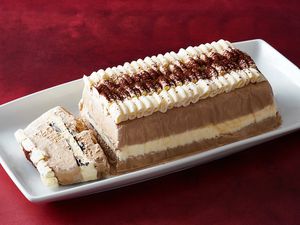