"Bauchspeck" is bacon used for cooking. The most common bacon on both sides of the Atlantic comes from the pork belly and is cured and smoked. In Germany, it is cured with salt, then cold-smoked with beechwood (predominantly) and air dried. The wood determines much of the flavor, which is why hickory-smoked bacon made in the U.S. tastes different than the German "Speck."

Also known as "durchwachsener Speck" or marbled bacon, it contains layers of meat and layers of fat. It is generally assumed that "Speck" or bacon comes smoked, but there is such a thing as "grüner Speck" which is uncured pork belly and can be cooked like other raw meat.

Bauchspeck is usually sold in pieces which are then diced and browned in the pan (the "Schwarte" or rind is removed first).

"Rückenspeck" - fatback. This white piece of pork fat is cut out of the back of the pig and is used, cured and smoked to bard lean foods, used in many sausages or is rendered fresh into lard or "Schmalz" (often eaten on bread).

"Schinkenspeck" is a cured and smoked cut of pork from the back hip which is sliced thin and usually served as cold cuts. It has larger muscles and less marbling than the inexpensive "Speck" used for cooking.

"Schinken" - a general term for all types of ham, the hind quarter of the pig. Hams can be fresh, cured, cooked or smoked. Not usually used to mean bacon.

Where Can I Buy "Speck" or What Can I Use Instead of "Speck"?

Of course, if you want to try the real thing, there are a couple of ways to buy it. German delis in large cities often carry slabs of double smoked bacon from Schaller and Weber, German butchers in New York. Online delis will ship bacon as well. 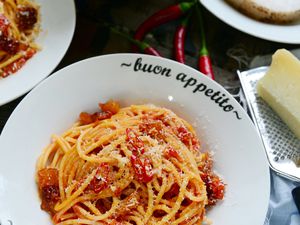 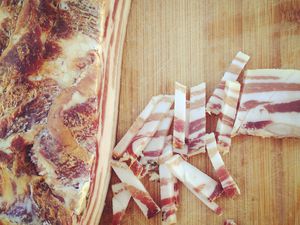 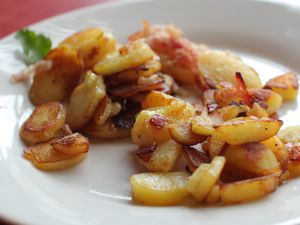