The Glenlivet is among the oldest and most loved Scotch whisky distillers. It's the brand that ignited the revered Speyside scotches, which are known for their elegance and rich taste. Situated in the middle of The Glenlivet's impressive portfolio of single malt whiskies lies the 18-Year-Old expression.

One of the brand's classic and most awarded whiskies, The Glenlivet 18 is relatively easy to find and reliably produced year after year. It is a pricey scotch best served straight. It isn't a smoky whisky and can be appreciated by both whisky enthusiasts and drinkers new to the scotch scene.

What Is The Glenlivet 18 Made From?

The Glenlivet Distillery was founded by George Smith in 1824 in Glenlivet, Scotland. It was the first legal distillery in the small Speyside region of northeastern Scotland, where many fine scotches are produced today. This brand set the standard for single malt whisky from the area.

As with all scotch, the whiskies of The Glenlivet are distilled from malted barley. It is not peated—a characteristic common to Speyside—so the whiskies lack the smoky taste often associated with scotch (there are exceptions, such as Nàdurra Peated Cask Finish). Instead, these whiskies are noted for their fruity, honey, spiced flavor profile.

Created by master distiller Alan Winchester, The Glenlivet 18 is a 40 percent alcohol volume (80 proof) single malt whisky aged for 18 years. Its flavor profile is contributed by a very particular selection of aging barrels. The first- and second-fill American oak casks add hints of tropical fruits, while former sherry casks contribute a spiciness that gives the whisky an intriguing complexity.

What Is Single Malt Whiskey, Anyway? 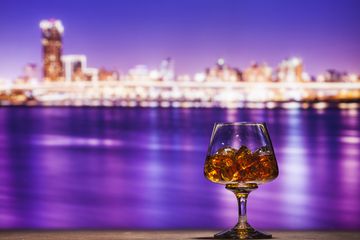 The Glenlivet 18 is a well-balanced Scotch whisky. The aroma offers a rich introduction of toffee, and a creaminess often likened to crême brûlée. With a medium body, the palate offers notes of sweet orange peel and vanilla, with undertones of burnt caramel. The finish is pleasantly long with a nice oakiness and winter spices.

How to Drink The Glenlivet 18

A Scotch whisky of this caliber is best enjoyed neat. It needs no enhancements other than a possible splash of water to open up the flavors and add to its vanilla creaminess. If you prefer it slightly chilled, adorn your glass with an iceball for a slow melt that will not alter the whisky too much.

The Glenlivet 18 makes a nice digestif after a satisfying meal. Additionally, the distillery suggests that it's an excellent pairing for filet mignon and foie gras.

Many drinkers would not think to mix a single malt like this into a cocktail due to its high price tag. However, if you are inclined to do so, it will make a Rob Roy or rusty nail like no other you've tasted. They're both great choices that would treat this whisky with the respect it deserves. And yet, you may also want to reserve those cocktails for one of The Glenlivet's younger expressions.

Where to Buy The Glenlivet 18

This particular Scotch whisky is widely distributed throughout the world. It typically sells for around $100, and may not be in every liquor store. Look for it where a good selection of high-end whiskies are sold. If it's legal to ship alcohol where you live, The Glenlivet 18 is also easy to find from online retailers.

More Expressions From The Glenlivet

The Glenlivet's core whiskies include a variety of options that are sure to please any scotch lover. These reliable expressions from the Heritage collection include 12-, 15-, 18-, 21-, and 25-year-old whiskies. They range in price from affordable to luxurious, so there's a sipping scotch for anyone's budget, as well as special occasions.

The Glenlivet portfolio has more opportunities for intriguing Scotch whisky tastings. For example, the Nàdurra line offers a taste of various barrel finishes, including whisky from oloroso sherry casks. If you enjoy more smoke in your scotch, the Nàdurra Peated Whisky Cask Finish is a rather gentle take on that experience.

There is much for the true scotch connoisseur to seek out as well. A limited-edition bottle from The Winchester Collection is filled with vintage scotch first barreled in the 1960s. Likewise, one from the Single Cask collection has barrel-strength, nonchill filtered scotch from a carefully selected barrel. Due to the limited availability, these expressions do cost more, though they are wonderful additions to a well-rounded whisky collection.