From Rice to Quinoa

Whether you're exploring a gluten-free diet or not, you'll be excited to know that there are many wholesome and nutritious grains to cook with. There's a wide variety and while their flavors and textures run the gamut, what they have most in common might be how versatile they are. Before we get to the specific grains, some quick ideas for how to prepare them include: 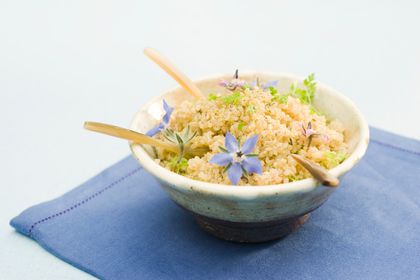 How to Cook Quinoa Perfectly Every Time

If you're looking for a delicious and easily obtainable gluten-free grain, you need look no further than the rice aisle at your supermarket. From jasmine to basmati, short grain to long (and with most types available in both brown and white), rice is a staple of every cuisine throughout Asia, Africa, Europe, and the Americas. We also include wild rice here, which is technically a seed, not a grain, but can be cooked the same way, either alone or combined with true rice.

The corn we prepare and serve as a grain is a different variety from so-called sweet corn, which is available canned, frozen, or eaten straight from the cob. Field corn gives us polenta, cornmeal, and breakfast cereals like corn flakes, while flint corn gives us hominy, grits, tortillas and tortilla chips, as well as popcorn. Polenta and grits are often conflated, but they're two distinct things, although they're generally prepared the same way, and both are nutritious, delicious and versatile.

Oats come in a variety of forms, from steel-cut (which are small and chunky and can be prepared like rice or risotto), to rolled, which is what we normally see in oatmeal and granola. Rolled oats are available in regular and quick-cooking. Note that while oats themselves contain no gluten, they can sometimes be processed in facilities that also process wheat and can therefore sometimes become contaminated by wheat. But many companies, like Bob's Red Mill and others, offer oats that are 100 percent gluten free.

Despite its name, buckwheat is a completely gluten-free grain. Whole grain buckwheat, sometimes called buckwheat groats, are available in plain and toasted, and can be simmered in a 1:2 ratio of grain to water. The toasted version greatly intensifies buckwheat's naturally earthy flavor. Cooked buckwheat can be served as a porridge, as a side dish, a pilaf, in salads and casseroles. Buckwheat flour can also be used in baking.

For many years, sorghum was mainly used in North America for making a sweetener called sorghum molasses and as an animal feed. But with the increased demand for gluten-free foods, sorghum is enjoying new popularity as a grain. Sorghum is a cereal grain that can be ground into flour for baking, but its mild flavor and light color make it an appealing ingredient and it can be prepared like a risotto and served with vegetables and in salads and stir fries.

Amaranth is referred to as a pseudocereal, since it's technically a seed, not a grain. But it can be simmered the same way as rice and oats, but with one important caveat: unlike rice, which is cooked in a volume of liquid equal to what it will absorb, amaranth needs more—figure three cups of liquid per half cup of uncooked amaranth. That's because the amaranth releases a large amount of starch during cooking, which will greatly thicken the cooking liquid. So cooked amaranth needs to be drained and rinsed before serving. Its flavor is nutty and slightly peppery, with a crunchy texture.

Teff is another gluten-free grain that is technically a seed. Native to Ethiopia, teff might be best known as the source of the spongy, Ethiopian flatbread called injera. To make injera, the teff seeds are ground into a flour and fermented. When cooked, teff grains congeal from the released starch, a little like polenta. And like polenta, cooked teff will become firmish when cooled, so it can be sliced it and pan-fried, like you would with leftover polenta. Teff is also great for thickening soups and as an ingredient in pancakes and breads.

Millet is also a seed and, by varying the amount of cooking liquid, it can be prepared in various textures, from fluffy to creamy, with a slightly sweet, buttery flavor that pairs equally well in savory dishes as in sweet. Simmer for 20 to 30 minutes using a 2.5:1 cooking ratio of liquid to grain. Increasing the liquid will yield a creamier result.

Quinoa is a light, fluffy pseudo-grain with a slightly nutty flavor. High in protein, quinoa is delicious served with chicken or fish, or even as the main component of a sweetened breakfast bowl. Different colors of quinoa have different flavors and textures, with white being the fluffiest, red featuring a nutty flavor, and black offering extra crunch. And since it contains all nine essential amino acids, quinoa is considered a complete protein. 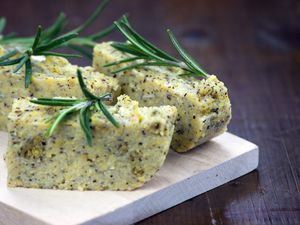 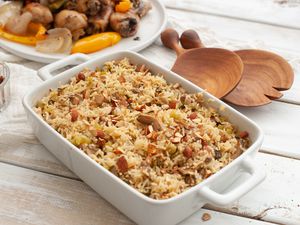 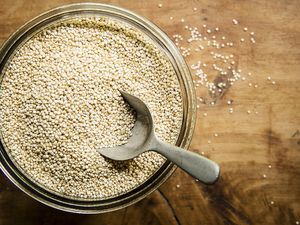 Reasons To Use Amaranth in Your Gluten-Free Recipes