We love seafood, but it can be costly and many have ethical concerns about the industry. This is why we eat canned fish. It's more cost effective—often averaging just a few dollars a pop—and can stay in pantries for up to five years, helping to reduce food waste. It also requires less energy to transport, since using shelf-stable cans nixes the need for refrigeration. But what about the grave memories we have of mystery tuna leftovers, reheated and still unappealing? Much of this comes down to cultural differences.

In Mediterranean countries such as Spain and Portugal, canned seafood (conservas), is a delicacy. Yes, that’s correct! You can choose from stuffed squid, mussels escabeche, and scallops marinated in tomato sauce, all canned and stacked on market shelves. Luckily, our canned fish options are expanding and improving, so it’s good to explore and go beyond "Chicken of the Sea." This guide will explain how to purchase canned fish sustainably, as well as define how the various types of fish (sockeye salmon? pink salmon?) taste different from one another. Then, you’ll be able to buy confidently and think creatively, leaving behind those mystery tuna memories.

Pantry Staples: A Master List of Everything You Need 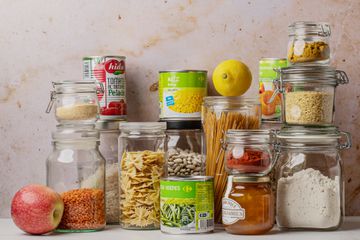 Salmon is uniquely high in key nutrients like omega-3 fatty acids and astaxanthin, a potent antioxidant that also gives salmon its color. Wild-caught salmon is often more nutritious, less laden with contaminants, and less environmentally destructive than farmed salmon. If the label doesn’t explicitly state that it’s wild-caught—or if it reads “Atlantic” salmon—it's likely farmed. Alaskan and Pacific salmon, on the other hand, have a reputation for being wild-caught and more sustainably harvested. If the can tells you that it’s a product of Asia, it means the Pacific or Alaskan-caught salmon was shipped all the way to Asia for processing, then back again. In this case, your product won’t be as fresh, but you can decide if that’s important to you.

As for how your canned salmon will taste, look for what type of salmon is inside. Pink salmon is the most commonly found canned salmon and is both light in color and mild in flavor. You’ll also readily find sockeye salmon, which has a rich color and taste, as well as a firm texture. Both chum and coho salmon are less commonly found in the can, but they are still excellent options. Chum has a similar flavor and color to pink salmon, but with a firmer texture. Coho salmon has a depth of flavor and color that’s just shy of sockeye, but it contains less fat. Canned salmon often comes with bones and sometimes, its skin. Not only can you eat the bones with little noticeable difference in taste or texture, but you’ll benefit from the heaps of calcium they contain. If you’re in the mood for something casual and easy, try this favorite recipe for salmon cakes (don’t forget the remoulade sauce!). You can also substitute canned salmon for the salmon steaks in this pesto salmon past or slurp up this creamy salmon and corn chowder.

America has had a long-term love affair with canned tuna and in fact, from about 1950 to 2000, canned tuna was the most popular seafood in the nation. But with concerns over high levels of mercury and marine life bycatch, this “chicken of the sea” has seen a dip in popularity. That said, there are safe and environmentally conscious ways to enjoy canned tuna fish. First, it’s good to know that each type of tuna—albacore, skipjack, yellowfin, and tongol—contain varying levels of mercury. Albacore tuna, also referred to as white tuna, is highest in mercury and the FDA recommends that you limit your serving size to no more than 4 to 5 ounces per week. Yellowfin tuna is a bit fuller in flavor than albacore, but its mercury levels are about equal. Skipjack tuna or light tuna, as well as tongol tuna have about three times less mercury per serving, so if you don’t mind their fishier taste, they’re your healthiest options.

As for sustainability, tuna that has either been pole or troll-caught is best—these are the most precise and least damaging fishing methods. When you’ve landed yourself a few cans of tuna, no matter the variety, delight in a gourmet tuna melt, a tuna casserole with mushrooms, a Galician tuna pie, and even a tuna potpie. Canned tuna is one of the rare fishes that tastes great with cheese, making for delicious, stick-to-your-ribs eating.

Shellfish is a catch-all term, encompassing mollusks, crustaceans, and even echinoderms. Although all three types of shellfish can be found canned or jarred, the most common in the states are mollusks and crustaceans. Unlike fish, shellfish often pose far less ethical and health concerns, making them a great option if you’re not in the mood to do any homework. Bivalves, like mussels, clams, and oysters feed by filtering nutrients from their environment, so even when they’re farmed, farmers aren’t pressured to buy cheap and often low-quality food to keep their farms running. Crustaceans, particularly shrimp, are unfortunately often sourced from unclean, unsustainable sources, so if you can’t be sure your product has been wild-caught, skip buying it. Often, shrimp from the United States or the Gulf of Mexico are a good bet. If this were a fresh shellfish guide, it would be worth the time to learn about the different species of shellfish, but with canned shellfish, it’s more about how they’ve been prepared and packed. Perhaps you’d like to remix your favorite chowder with smoked clams. Or take olive oil-packed oysters, which you can spread on French bread with a shake of Spanish paprika. There’s always this delicious recipe for laksa noodle soup, too.

Commonly caught off the coasts of the Mediterranean, Northern Africa, and Western Europe, anchovies are frequently matured in a brine, then packed in oil or salt. Their flavor packs quite the punch and they're the iconic fish in Caesar salad dressing, as well as Provençal pissaladière. Anchovies are an oily fish and while in the wild, they feed mainly off of plankton so they're about as far down the food chain as you can go. This is actually a good thing in terms of sustainability and toxicity: anchovy populations replenish quickly since their natural life cycle is only a few years long and also, animals lower down in the food chain typically don't build-up toxins like mercury or PCBs in their tissues. Although the vast majority of anchovies are cured and packed in either oil or salt, the variety used for Spanish boquerones are pickled and offer a distinct, yet equally tasty, appeal. Now, pre-packaged boquerones may be more difficult to find, but they're shelf stable so don't forget you can fish for them online, too.

Sardines are often compared to anchovies for both their similar appearances and flavor. That said, sardines are larger and their flavor is normally less intense since they don't undergo the same curing process that most anchovies do. After they're caught, sardines are either deep-fried or steamed, then either smoked or packed in oil. The former method is the popular choice in Scandinavian countries, while Mediterranean countries like Portugal and Spain prefer their sardines in oil. As for sustainability, sardines are a great choice—they're low down on the food chain and repopulate quickly. Though as a schooling fish, they're commonly caught using the purse-seine method. This is not the most sustainable approach in terms of by-catch, so if eating sustainably is a priority for you, this is useful to know. They're served as sardine balls in spicy tomato sauce in Morocco and can be stirred into this lemony linguine, too.