The name doesn’t lie—set it and forget it

We purchased the Hamilton Beach Set & Forget 6-Quart Programmable Slow Cooker so our reviewer could put it to the test in her kitchen. Keep reading for our full product review.

The Hamilton Beach Set & Forget 6-Quart Programmable Slow Cooker definitely raises a bit of scrutiny by incorporating the “set it and forget it” moniker right in its name. But with over a century of experience manufacturing small household appliances and 50+ categories of products, Hamilton Beach may be just the brand to pull off this impressive feat. So, does this slow cooker really let you toss ingredients into the pot in the morning and arrive home to a warm dinner? Read on for our findings.

This slow cooker lives up to its name with solid results and smart technology. Not a single recipe we tried showed hot spots, or to put it simply, nothing burned. The temperature probe took the worry out of cooking a whole chicken, ensuring the breast temperature reached 160 degrees and the thigh reached 175 degrees—we even confirmed it with a second thermometer. We were also impressed by the power-interrupt protection, which lets the appliance return to the same heat and time settings during short power outages up to five seconds, reducing the likelihood of coming home to a half-cooked dinner.

The temperature probe mode allowed us to cook poultry and meat to an exact internal temperature before the appliance switched over to the warm setting.

Just by looking at this slow cooker, we could tell that it’s built to travel. At only 12.8 pounds, Hamilton Beach’s model is lighter than many other 6-quart slow cookers and its plastic handles stay cool to the touch, so we didn't have to worry about stashing an extra pair of potholders in the car. We also found that latches and a gasket secure the crock and lid to minimize spills during the ride, so we didn't lose half of our honey-glazed ham on the way to Friendsgiving.

However, there are several tradeoffs that allow for this superior portability, including thin stainless steel casing which is prone to dents, and too-short handles on the crock which make it awkward to remove. Finally, we found the control panel difficult to read, because the green LED text lacks brightness and sufficient contrast from the grey background. If you have a window in your kitchen, you may need to draw the shades to check the slow cooker’s status. Overall, though, these are minor grievances considering the model’s performance.

Both the ceramic insert and glass lid are dishwasher-safe, but we thought they were light enough to easily hand wash. The brushed exterior shows fingerprints and smudges that are a bit difficult to clean off, but you'll find that with most metal appliances.

Not a single recipe we tried showed hot spots, or to put it simply, nothing burned.

Like most slow cookers in its price range, the Hamilton Beach Set & Forget model has programmable options for high, low, and warm settings, as well as a manual mode. The programs are a tad shorter than others we've seen before, maxing out at 14 hours—12 hours on high or low, switching to warm for an additional two hours.

However, what sets this model apart is its one-of-a-kind temperature probe. The temperature probe mode allowed us to cook poultry and meat to an exact internal temperature before the appliance switched over to the warm setting. Hamilton Beach holds the patent for this cool technology, so you won’t find this feature on other brands’ slow cookers.

Take a peek at some of the other best kitchen tools for first kitchens you can buy.

Price: Mid-range and worth it

The best price comparison for the Hamilton Beach Set & Forget 6-Quart Programmable Slow Cooker are other 6-quart models with ceramic inserts, such as those from Crockpot, Presto, and Black+Decker. Prices in this category range from around $40 to $70, placing the Hamilton Beach model squarely in the middle of the pack. However, the versatility offered by the temperature probe setting is worth the extra cost, if you ask us.

We found the control panel difficult to read, because the green LED text lacks brightness and sufficient contrast from the grey background.

What sets this slow cooker apart from nearly all similarly sized programmable slow cookers with ceramic inserts is its travel-friendly design and temperature probe. As mentioned, there’s nothing outlandish about the model’s price—it’s neither cheap or expensive. And, surprisingly, there are still only a handful of competitors—even when considering more expensive units—that are similarly designed for portability. Plus, Hamilton Beach’s proprietary temperature probe is a major leg up.

Want to take a look at other options before you buy? Read our list of the best slow cookers.

The Hamilton Beach Set & Forget 6-Quart Programmable Slow Cooker sets itself apart from other similarly-priced 6-quart slow cookers thanks to its ease of cooking, versatile temperature probe, and effortless portability. The peace of mind provided by the patented temperature probe does indeed live up to the “set it and forget it” maxim in its name. 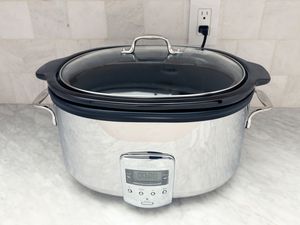 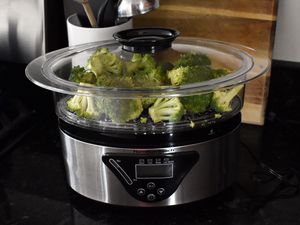 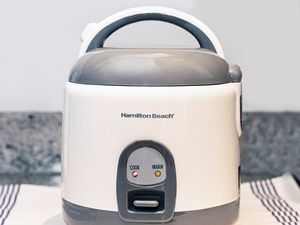 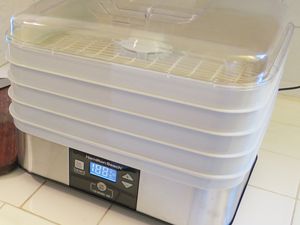 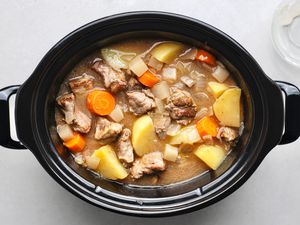