Golden, full of sparkle, and the ultimate refreshment, Pilsner is easily the most popular beer in the world, and its creation revolutionized the brewing industry. In the mid-1800s, lager was nothing new—brewers in Bavaria and Bohemia had been making it for centuries—but Pilsner was the first pale lager. Wildly different from the dark lagers, this new beer style was an instant success. It led to equally famous adaptations like German Pils and American light, and the story behind Pilsner's development begins with a river full of lousy beer.

Plzen: Where Beer Runs In The Streets

In 1838, the citizens of Plzen (or Pilsen), Bohemia (now the Czech Republic), saw something that would make any beer lover cringe. The town's brewmasters rolled 36 barrels of ale into the street, opened them up, and spilled the beer in the main square. The beer ran into the ditches and finally into the nearby Radbuza River.

Ales were prone to spoilage either by wild yeasts or bacteria. Even the breweries of Plzen, with over 800 years of experience, regularly contended with contamination issues. This batch was simply too far gone, and the brewers decided that the ale had become undrinkable.

This time, though, would be different. After watching their work run down the street, the brewers gathered and decided to take drastic measures so this would not happen again.

By that time, brewers in Bohemia and across Europe had learned the importance of yeast in the brewing process. There was debate about whether fermentation was a living process or a by-product of the yeast's death (the definitive answer came from Louis Pasteur decades later). However, there was no question that this mysterious little life form had a significant effect on the character of a beer.

The local burghers (licensed brewers) teamed up and sent architect Martin Stelzer off to study breweries in Munich and other parts of Bavaria. He returned with plans to build the ideal brewery, complete with a state-of-the-art malthouse and kiln. In his travels, Stelzer met Josef Groll, a Bavarian brewer, whom the burghers hired to teach them the German lagering method.

Legend holds that in 1840 a monk smuggled some of the precious lager yeast out of Bavaria. Though this is likely untrue, when Groll arrived in Plzen, there was a supply of lager yeast available. He found a nearby source of excellent Saaz hops, a Noble variety he would have been familiar with in Germany. The brewers of Plzen also had a well that supplied very soft water and sandstone caverns carved for lagering. With all the elements in place, the stage was set for lager brewing.

Using light barley that was only partially malted and none of the roasted or smoked barley that the German brewers were using, Groll added generous portions of the fragrant Saaz hops to his brew. On October 5, 1842, he and the other brewers of Plzen gathered for their first taste of the new beer.

When they tapped the cask, they saw a beer unlike any other that they or anyone else in the world had seen. The color of straw, it was light and clear. One could see right through it to the other side of the Bohemian crystal glass. Still cool from the lagering tunnels, this was a surprisingly refreshing beer, not dark and heavy like the ales that they were used to.

The brewers of Plzen knew that they had a great beer. Thanks to the Radbuza River, news of this new beer from Bohemia spread, and so did a lot of the beer itself. Plzen, or Pilsner, beer was born.

Many Copies, One Original

The brewery would become the famous Pilsner Urquell. The newly created brew is one of the most copied beers in history, and the new style adopted the brand name. In the Czech Republic, Pilsner is the brewery and brand, but světlé ležák ("bright lager") refers to the style.

Aside from improvements brought about through advances in refrigeration and sanitation, little has changed about how Pilsner is brewed. The recipe has many variations, but most contain lightly kilned malt and Noble hops varieties, usually Saaz. To enhance the delicate flavors of the grain and replicate the Plzen brewery's naturally soft water, breweries will often soften water from local sources. The helles style is a less hoppy adaptation developed by Spaten-Franziskaner-Bräu in Munich, though it's most often found on top in beerhalls.

Other variations were designed to cut costs. Such changes include replacing part of the barley with rice. While cheap, rice contributes little flavor or aroma to the brew. With the flavors contributed by the barley, the balancing hops can also be cut to drive costs even lower. The resulting beer has an equal amount of alcohol but less flavor and aroma, making it seem watery compared to other 100 percent barley pilsners. Though the breweries that produce these beers continue to call them Pilsner, some have assigned them to a new style category: American light.

Do You Know What Makes a Pale Ale a Great Beer? 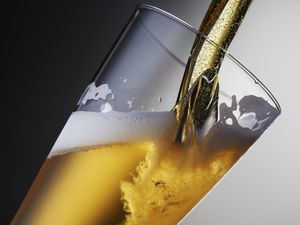 Top 10 Beers of Each Style