A Guide to Buying, Cooking, and Storing Hoja Santa

Hoja Santa (pronounced O-hah SAN-tah) is an herb commonly used in the cuisines of central and southern Mexico to flavor many savory dishes. The term hoja santa means "sacred leaf" in Spanish, but this herb also goes by several different names, including yerba santa, Mexican pepperleaf, and root beer plant. It is native to Mexico and South America and is also grown in the Southwest United States as well as Florida and California. The herb can be used both fresh and dried, but fresh is preferred and necessary when wrapping food; dried becomes brittle and loses its flavor. Hoja santa is available year-round.

Hoja santa is from the Piper auritum plant and is a part of the peppercorn family. The large, heart-shaped, velvety leaves are a bright green color on top and paler on the underside. They measure up to one foot across and grow horizontally on thick stalks.

Hoja santa has an unusual and quite complex flavor which is stronger in younger, more tender leaves. This herb contains the same oils as the sassafras tree, which are used to make root beer; in the southern United States, hoja santa is actually known as the root beer plant.

A popular legend explaining the name "holy leaf" is that the Virgin Mary would hang the Christ Child's freshly-laundered diapers to dry on the hoja santa plant. While this makes an enchanting story, it is most certainly untrue as this plant is native to tropical Meso-America and was unknown in the Middle East 2,000 years ago. Another thought as to the herb's name origin is that the ancient Aztecs, one of the first known users of hoja santa, used it for ritual purposes. They also included it as a flavoring in their bitter chocolate drinks. The herb is still used today in some places to flavor sweet hot chocolate and to prepare a medicinal tea. It is also made into a green liquor called Verdín in the Mexican states of Yucatan and Tobasco.

Hoja Santa's complexity of flavor is not able to be reproduced with any other herb, but a somewhat similar flavoring can be accomplished by using feathery fennel leaves, which also have an aromatic licorice taste.

This herb is most often used fresh and usually cooked, as the leaves remain green and retain their flavor when heated, and the veins are too tough to be eaten raw. The dried leaves can also be used as a seasoning, though fresh hoja santa is much more flavorful and preferred for most uses. Chopped hoja santa is incorporated in a wide variety of Mexican stews and sauces, and is occasionally cut into very fine strips to be used as a condiment for soups and egg dishes.

Fresh hoja santa leaves are also used to wrap and flavor artisanal cheeses, and to wrap tamales, meats, and fish for steaming or baking. To use hoja leaves as a wrapper, rinse them well and slice along both sides of the central vein. Wrap the resulting two lobes around the food and eat along with the filling.

Hoja santa is a common ingredient in yellow mole or mole verde, barbacoa preparations, and fish preparations in Veracruz sauce. Add fresh hoja santa to a variety of Mexican recipes, or use in place of banana leaves or corn husks in tamales.

Where to Buy Hoja Santa

Hoja Santa is still a bit difficult to find in the United States, although that is slowly changing. It most likely will not be available in the major grocery store chain; if near a Latin American community, the local markets may have some in stock. Dried hoja santa can be found online, as well whole plants and seeds. Hoja santa is easy to grow in temperate areas and is such a fast-growing and abundant plant that is sometimes considered an invasive weed.

In Nahuatl, the language spoken by the Aztecs and still very much in use among certain indigenous peoples in Mexico, hoja santa is known as tlanepa or tlanepaquelite which means “aromatic herbal medicine” and speaks to its use in traditional medicine to treat any number of conditions as diverse as a cough, rheumatism, and female complaints.

This wonderful plant has many other names aside from hoja santa or tlanepa. In different areas, it is also called acuyo, yerba santa or hierba santa, anisillo, momo, alaján, Vera Cruz pepper, or sacred pepper, among others. 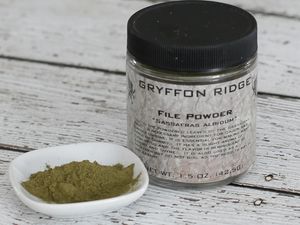 What Is File Powder?