Infusing liquor at home is a great way to enhance your cocktails. Whether you want to add flavor to your favorite vodka or create a uniquely flavored rum, tequila, or gin, it's a simple DIY project that gives you complete control over the alcohol's flavor. You can customize it to your personal taste and make your drinking experience a little more interesting.

Infusions are both fun and limitless. The basic concept is to add a single flavor or a combination of flavors to a distilled spirit using fruits, vegetables, herbs, or spices. It is very easy to do and simply requires a little patience and imagination.

Vodka infusions are the most common, and other light liquors (e.g., gin, sake, light rum, and tequila) can also be used. Infusing darker spirits is a little trickier, but it will work if you choose the right flavor to complement the liquor. Apricot or cherry brandy and coffee-infused whiskey are great examples that are very useful in cocktails.

Turn Juice Into Hooch: Three Kinds of Alcohol You Can Make at Home 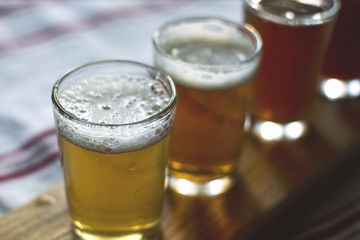 Infusions don't require a big investment and you can use the infusion jars over and over again. You will need a few basic supplies:

As you work with infusions, you will find that wide-mouthed jars are best. These allow you to get the ingredients in and out of the liquor easily. Some ingredients, such as cinnamon sticks, will expand as they soak up the liquid. Trying to remove a swollen stick through the narrow neck of a liquor bottle is nearly impossible. If you want to recycle your liquor bottles, reserve them for the finished infusion after removing the ingredients.

As far as jar size goes, a 750ml bottle of liquor is just under one quart (25.4 ounces). If you're infusing an entire bottle, a 1-quart (32-ounce) jar will leave room for your ingredients.

Every infusion begins by choosing the liquor, and the final infusion will only be as good as the liquor you use. By selecting a decent brand that is smooth and clean, the flavors you add will shine. If you're experimenting with a new infusion, you may want to use a less expensive bottle to avoid wasting money or good liquor. Once you perfect an infusion recipe, upgrade the liquor in a subsequent batch.

Select and Prepare the Flavor

The really fun part of infusions is choosing the flavor, and there are no limits. You can use a variety of herbs, spices, fruits, and even veggies for infusions.

The most popular infusions are fruit-based (e.g., strawberry vodka and pear gin). You can also create some wonderful combinations, such as lemongrass-ginger tequila or lavender-rosemary vodka. There are fun possibilities with unusual ingredients, too. Kettle corn gin or butternut squash bourbon, anyone?

For the best results, use fresh ingredients. Dried spices are the exception, and sometimes you can get away with dried herbs.

Common sense will guide you in preparing many of your infusion ingredients. For the most part, a few cuts and a good rinse under cold water are all that's needed. You want to cut fruits and vegetables so they fit in your jar and remove any undesirable parts—the skin of a cucumber, for instance, can impart a bitter taste. Citrus fruits and similar ingredients do not necessarily need to have the peels removed.

How to Infuse Alcohol

Place masking tape on each jar to make notes about ingredients, dates, and other customizations so you know what works and what doesn't. Blue painter's tape is great for temporary labels and will not leave a sticky residue on your jars.

You can return the infusion to its original jar or bottle if you like. Just make sure to clean it thoroughly first. Store the finished infusion in a cool, dark place as you would any other liquor. Because this is a straight flavor infusion and you're not adding sugars or other ingredients as you would in a homemade liqueur, it will have the same shelf life as the original liquor.

Do You Know the Shelf Life of Your Liquor Cabinet? 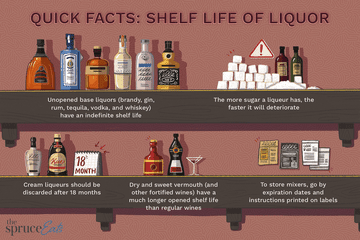 Use these times as a general guide to gauge how long to leave the ingredients in a jar:

In a multi-flavor infusion, use a different infusion time for each ingredient to create a balanced taste. For instance, a cinnamon-serrano tequila infuses cinnamon for two days, then uses a short two-hour infusion for the serrano pepper. Adding the pepper with the cinnamon would ruin the tequila.

It can be difficult to know where to begin with infusions, but there are plenty of ideas to get you started. For instance, you might try an apple-pear gin or a cocoa-infused rye whiskey. Both are delicious, easy, and can make some very interesting cocktails.

It's also incredibly easy to make your own cinnamon whiskey to replace something like Fireball. Simply combine a couple of cinnamon sticks and the whiskey of your choice and infuse it for a few days. You'll find it to be much cleaner and more naturally flavored than those sweetened cinnamon whiskey liqueurs.

You don't have to start with unflavored liquor, either. It's fun to add a complementary flavor to store-bought flavored vodka or rum. For instance, you can infuse rosemary into a strawberry-flavored rum or try a quick jalapeño infusion in mango vodka. Liqueurs and fortified wines are also fair game; Thai chile-infused Aperol and raspberry vermouth are two great examples.

These are just the beginning of the possible infusions you can create. Let nothing stop you from experimenting and trying out new flavor pairings in any liquor you feel like using. You will have some duds, that's for sure, but when you come across a winner, the discovery can do wonders for your cocktails.

Allow your creative juices to keep flowing as you decide what to do with your new flavored liquor. Try a strawberry-kiwi vodka martini, lemongrass-grapefruit vodka tonic, or a mint-vanilla bean Moscow mule. The spicier concoctions like garlic-habanero make an unbelievable bloody mary.

Enjoy the process and, most importantly, have fun!