Whether you're cooking for a large group, or adapting a favorite pot-luck dish to serve just one or two, modifying a recipe to change the number of servings it yields is a fairly common challenge. Sometimes it's as simple as doing some quick math, while other times it's quite a bit more complicated.

How to Scale a Recipe

Adjusting the number of servings of a recipe is called scaling, and broadly speaking, it involves multiplying (to increase) or dividing (to decrease) the quantities of the individual ingredients in the recipe.

So if you're making club sandwiches for 12 people, and your recipe makes 2 sandwiches, you'd simply multiply every ingredient times 6: the slices of bread, the mayonnaise, the turkey, and so on. You might have to convert the quantities, so that 24 tablespoons of mayonnaise becomes a more comprehensible 1 1/2 cups, but it's all pretty simple. Obviously, not everyone uses a recipe to make sandwiches, but the example helps to illustrate a fairly straightforward case. 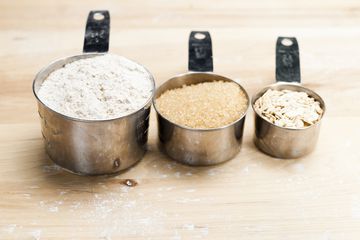 Other recipes don't scale well at all, like yeast breads. Suppose you got your hands on the dough recipe from your favorite pizza restaurant, and find that each batch uses one 50-pound sack of flour and makes 100 pizzas. But you only want to make one pizza. In this situation, simple math could do more harm than good. That's because you probably only need 2 ounces of dry yeast for those 100 pizzas, but dividing that by 50 would yield an amount of yeast too tiny to create any rise.

Scaling in the other direction can be even more hazardous. Let's say you want to make 10 pizzas. A recipe for a single pizza might call for one packet of yeast, but 10 packets will produce a huge, bubbly mess. Other leavening agents, like baking powder and baking soda, don't lend themselves to straight-up multiplication either.

In cases like this, you'd be better off seeking out a recipe closer to the number of servings you want. You can also prepare multiple batches, which we'll discuss later.

Which Recipes Can Be Scaled

More often, though, you're not making exponentially bigger recipes, you're simply looking to double, or quadruple, or maybe halve, a recipe. And the recipes that best lend themselves to this kind of manipulation are soups, sauces, and stews. With that said, multiplying seasonings can also prove tricky. If you're making a quadruple batch of spaghetti sauce, you might not need four times the salt; start with twice the salt and taste as you go.

Otherwise, for these types of dishes, all you generally need is a bigger pot. Where things get trickier is with the baked casserole style of dish, including things like lasagnas and mac and cheese.

With foods like these, the dimensions of the pan becomes an important factor, since doubling changes the volume of the food, and thus potentially its thickness.

So the rule of thumb here is to try to keep the thickness of the food as close to that of the original recipe as possible. If a casserole was two inches thick (and this is pretty common) and you want to double it, you would ideally use a pan that produces a larger casserole that is also around two inches thick. If this is the case, then your cooking time and temperature are not going to be affected much, if at all.

But sometimes this isn't possible. Let's say you're making a double-sized frittata, and instead of two inches thick, it's now closer to three. This means it's going to take longer to heat the mixture all the way through. But this longer cooking time means the top might start to burn.

To remedy this, you can reduce the temperature a little, say 25 degrees, and let it cook a bit longer. To prevent excessive browning on top, you might need to cover it with foil for the last part of the cooking time.

If you're scaling down to a smaller size, the principle is the same: use a pan size that produces as close to the original thickness as possible. Scaling down can decrease the cooking time by 25 to 50 percent, depending on size.

An alternative to scaling is to cook in batches. This means that instead of doubling the size of a casserole, you'd simply make two separate casseroles of the original size and bake them at the same time. They might take a bit longer to cook due to the more crowded oven, but not significantly more.

Batching is certainly the best approach to take when doubling a cake recipe—bake two cakes in two separate cake pans rather than baking a single cake that's twice as big. Of course, sometimes you might want a larger cake, in which case, you'll want to stick with the idea of using a larger pan to keep the thickness (or depth) of the batter the same as the original.

You can also expand on the batch technique if you want to quadruple: just make two double batches.

When scaling down, you might not have the pan size to prepare the smaller amount, so as a last resort, you can always make the full recipe and freeze half of it. Fortunately, casserole-type dishes freeze exceptionally well. And you don't really need to thaw it before reheating it, but can typically pop it straight from the freezer to the oven (depending on what kind of container it's stored in). Here are some tips on freezing casseroles.

And of course, if you can manage to eat the other half within a few days, you could skip the freezing altogether. Just store it, tightly wrapped, in the fridge, and reheat it in a 350 F oven.