Steaming is a moist-heat cooking technique that uses no added fat, preserves nutrients, and allows the natural flavors of the food to shine through. It's quick, efficient, and versatile. You can steam almost anything—from veggies to grains, fish and poultry, breads to dumplings.

One of the most traditional and time-honored ways of steaming foods is by using a bamboo steamer.

What Is a Bamboo Steamer?

Traditionally used in Chinese cooking to steam fish, vegetables. and dumplings, a bamboo steamer is incredibly versatile. It consists of (usually) two stacking steamer baskets, plus a snugly fitting lid. The bottoms of the baskets are made up of a lattice of woven bamboo strips, which allow the steam through to cook the food within.

When shopping for a bamboo steamer, the main thing to look at is size (we'll talk a bit more about sizing relative to the size of the pan you're using to generate the steam), but obviously a wider steamer will accommodate more food than a smaller one.

Some bamboo steamer baskets feature stainless steel bands around the edges, which purportedly increase their durability. However, these bands also prevent you from using the steamer in the microwave, which, though not the traditional method, is certainly viable, as steaming in the microwave is definitely a thing.

In general, a decent bamboo steamer can be had for between $20 and $40, although if you live near a decent-sized Chinatown, you can almost certainly find a good one for much less than that.

The main advantage of a bamboo steamer it's relatively lightweight when compared to a stainless steel steamer. Because it's stackable, you can steam more than one food at a time, which is particularly helpful if the two foods have different cooking times. Simply place the food with the longer cooking time at the bottom, start cooking, then add the tier with the shorter cooking time afterward.

Steamers with multiple, stacking baskets are also available in stainless steel, so there's no real reason to use bamboo unless you happen to prefer the aesthetics. Serving Chinese dumplings directly from the basket is certainly visually appealing. 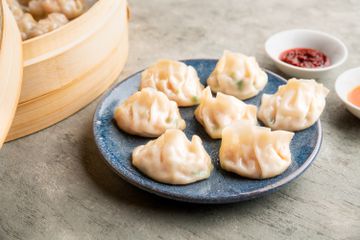 How to Use a Bamboo Steamer

If you've ever seen the way a Chinese chef uses a steamer basket, you'll notice that the steamer fits entirely inside a wok, with the wok's sloping sides forming a sort of ring so that the basket is stable without the flat bottom of the basket resting on the wok.

Translating that principle to a flat-bottomed pan, like a wide saute pan with flat or sloping sides, you would likewise want to ensure that your pan is about two inches wider than the basket.

Still, you could also place a bamboo steamer directly on top of a smaller saucepan. Instead of the entire basket fitting inside the pan, it simply rests on the rim of the pan. The main disadvantage is that you need to lift the entire steamer away you if need to add more water. It's also rather precarious with steamers that have more than two tiers.

Using a bamboo steamer involves boiling water in a pan, setting the steamer atop the boiling water, covering it with the lid and steaming until the food is done. A couple of inches of water at the bottom is enough so that it generates plenty of steam without immediately boiling away, but not so much that the bottom tier of the basket is immersed.

Another issue with bamboo is that foods will stick to it and removing cooked-on foods from all that intricately woven bamboo can be challenging. To deal with that problem, you will want to line your steamer with something.

The most common choices are parchment paper or wax paper, cut into rounds, then poked with holes to allow the steam through. Silicone mesh will also work (but needs to be cleaned), and some steamers come with reusable cotton liners. Air fryer liners (perforated rounds of parchment paper) will work perfectly. With stainless steel steamers, lining is not needed.

Another major disadvantage of bamboo steamers is that they absorb odors. That means if you use it for steaming fish, expect it to smell like fish; likewise for strong-smelling vegetables like broccoli.

Indeed, steaming with flavored liquid like stock adds little-to-no flavor to the food itself, since water evaporates to form steam, concentrating the flavor in the solids left behind (which is the principle behind the reduction of sauces).

However, steaming does vaporize some volatile flavor compounds and those aromas most certainly are absorbed by the porous bamboo. So while a flavorful steaming liquid won't help your food much, it will certainly make your bamboo smell.

Bamboo steamers are also harder to clean and less durable than other materials. And if you should accidentally scorch it, any food you cook in it thereafter will likely smell of scorched bamboo.

Even a new steamer can impart a bamboo-ish smell to the food and while there several methods to deal with this, like steaming slices of lemon or tea bags, or soaking the baskets in a solution of vinegar and water—this is simply not an issue when it comes to stainless steel.

Cleaning and Storing a Bamboo Steamer

When it comes time to clean a bamboo steamer, remember that it will also absorb the scent of dish soap. Thus, scrubbing in hot water and air drying is your best bet. Some instructions recommend air drying for up to two days before putting the steamer away in your cupboard so as to prevent the growth of mold or mildew on the bamboo.

How to Steam Foods Without Turning Them to Mush
Featured Video