The ketogenic—or “keto”—diet is one of the most popular eating plans around. But how exactly does it work? And how will your eating habits change if you follow it correctly? Here’s a brief overview to help you understand what to eat, and what not to eat, on the keto diet.

The ketogenic diet is a very low-carbohydrate, high-fat eating plan with a moderate amount of protein. When followed carefully, the keto plan triggers a state called ketosis. It typically takes a few days to a couple of weeks to reach this state.

What does ketosis mean? Well, ordinarily when we eat enough carbohydrates (and to a lesser degree, protein) from food, the body produces glucose for cells to use for energy. In contrast, if you significantly reduce your carbohydrate intake (as in the keto diet), this triggers your body to burn stored fat. This, in turn, creates a type of acid called ketones, which the cells can use as fuel. The state of having an excessive concentration of ketones in the bloodstream is called ketosis.

Doctors have been using the keto diet for nearly a century to treat drug-resistant epilepsy in children. These days, most people rely on the keto regimen for weight loss; others may use it to lower blood glucose levels in type 2 diabetes, although research suggests such severe carbohydrate restriction is unnecessary.

Most people on the keto diet follow a formula for how many of their daily calories come from fat, protein, and carbohydrates. The following is based on a 2000-calorie eating plan.

To meet these requirements, keto dieters dine on fatty animal foods, such as meat and cheese, poultry, fish, eggs, and added fats, while limiting or excluding fruits, vegetables, grains, and sweets.

Carbohydrate restriction is central to ketosis. Some followers tally “net carbs,” by subtracting the grams of fiber in food from the total carbohydrate content, with the idea that fiber doesn’t disrupt ketosis because it’s indigestible. However, the science surrounding this concept is fuzzy, and “net carbs” is not recognized by the U.S. Food and Drug Administration. Calculating your total carbohydrates for the day is the most accurate way of tallying them.

Note that there are different types of diets that claim to be keto, but not all of them will necessarily put you into ketosis. Just because a diet is low in carbs doesn’t mean it’s keto.

Pros and Cons of the Ketogenic Diet

Who Is the Ketogenic Diet Not For?

Children and teens should never consume a ketogenic diet without supervision from a registered dietitian/nutritionist (RDN) who is an expert in pediatric nutrition.  Pregnant and breastfeeding women, those with disordered eating, the elderly, and people with kidney disease, pancreatic disease, thyroid disease, gallbladder disease, and other chronic conditions should also avoid the ketogenic diet.

What to Eat on the Ketogenic Diet

Lower-carbohydrate foods are the mainstays of the keto diet. Meat (including processed meats such as ham, hot dogs, and salami), poultry, seafood, nuts, seeds, oils, butter, lard, heavy cream, full-fat sour cream, olives, and avocados, are part of the keto plan. Berries, and most non-starchy vegetables, such as green beans, cauliflower, asparagus, and onion, are also permissible. As for dairy foods, hard cheeses, including cheddar, Monterey Jack, and Havarti, are on the menu, as is full-fat cottage cheese and plain yogurt. Unsweetened coffee and tea, and unsweetened cocoa powder, are also part of the keto regimen.

The important thing is how all of your food for the day adds up. People following the keto diet must calculate how to spend their daily carbohydrate “allowance.” So even a lasagna recipe formulated to be keto-friendly can deliver so many carbohydrates per serving (in this case, 19 grams) that there’s little room for any other carbohydrates that day. Additionally, you will need to make sure you're not eating too much protein, which can interfere with fat burning; and you will need to make sure you're eating enough fat, or you could slow down your metabolism.

In other words, don’t assume that three square meals from recipes or dishes labeled "keto-friendly" will keep you in ketosis.

What Not to Eat on the Ketogenic Diet

If you’re following the keto plan to the letter, many foods are off limits. It’s likely you will have to avoid all fruit, with the exception of berries, and most vegetables, including potatoes, corn, carrots, beets, and all types of winter squash, as well as legumes, such as black beans, chickpeas, and lentils.  Added sugars and sweets, whole and refined grain foods, including bread, oatmeal, and pasta, milk, and sweetened yogurt, are all largely off limits, too.

The ketogenic diet is a restrictive plan that’s helpful for controlling certain types of epilepsy in children and promoting weight loss in adults, and one that may play a role in managing some neurodegenerative conditions, including Parkinson’s disease. Limited carbohydrate intake is the premise of the keto plan, which prompts the body to burn fat and produce ketones to use for energy.  Following a keto regimen requires diligence and discipline, and the diet produces some undesirable, but fleeting side effects. Many people, including those with certain chronic conditions, should not try the keto diet.

Always consult your doctor before starting the keto diet and work with a registered dietitian/nutritionist to monitor your progress and to ensure that you meet your nutrient needs.

27 Delicious Recipes to Keep Your Keto Diet on Track 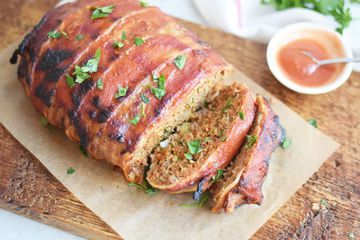