Ales are a type of beer produced by top-fermenting yeast that ferments at warmer temperatures and less efficiently than lager yeast. This leaves more malt sweetness and, quite often, a fruitiness or spiciness to the flavor and aroma of the beer. Ales are a diverse group, too. It includes a variety of styles, from approachable pale ales to bitters to deep, dark stouts.

What Is the Difference Between Ale and Lager?

There are two main types of beers: ales and lagers. Nearly every beer falls into one of these categories, though a few "hybrid beers" are a little of both. Ales are older than lagers, and among the oldest beers ever brewed.

The primary difference is that ales use top-fermenting yeast and lagers use bottom-fermenting yeast. For ales, the yeast flocculates (gathers) at the top of the fermentation tank as it converts the sugars into alcohol. Lager yeasts do their work at the bottom of the tank.

Unlike lager yeast, which can withstand cool temperatures, ale yeasts work best in warm environments. Generally, that's between 60 and 72 degrees Fahrenheit, depending on the yeast. After fermentation, ales are typically not aged. Those that are, undergo just a few weeks of aging.

There is a wide variety of ale styles, and it's a much more diverse group of beer than lagers, ranging from pale to very dark. Typically, ales are more flavorful, robust, and complex, often with fruitier and more aromatic characteristics. Ales are also known to be more bitter than lagers, which is why they rank higher on the International Bitterness Units (IBU) scale.

Lagers Dominate the Beer Cooler, but What Exactly Is It? 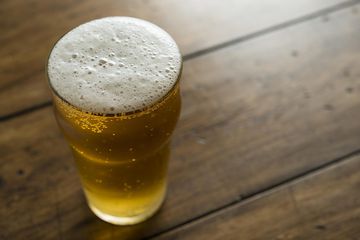 A trip to the beer cooler will reveal many ales. There are a few general styles, each with distinct characteristics, so you have an idea of what to expect.

Also called golden ale, this style has the lightest color of all ales, though some blonde ales use lager yeast. Generally very approachable and great for food pairings, it's an easy-drinking style with low bitterness, honey, spice, and fruit notes, and moderate alcohol.

Pale ales are not always "pale," but when it was originally produced, it was one of the palest beers available. Compared to stouts or porters, the copper, amber, or bronze color of this beer is quite light. With an equal balance of malty sweetness and bitter hops (30 to 45 IBUs), this ale is a favorite among beer drinkers that are used to pilsner and other lagers.

Commonly abbreviated IPA, this style is technically a pale ale, though it's also grown into a style of its own and is a favorite among American craft brewers. India pale ales use more hops and are known for their amplified bitter taste. Some are relatively mild at just 40 IBUs, though imperial pale ales can reach 100 IBUs. These hoppy beers do have some malt flavors, are typically stronger, and range in color from golden to amber.

Brown ales are popular for their drinkability and easy food pairing options. The nutty sweetness blends with subtle hopping and low alcohol for a smooth ale. English-style brown ales range from dry to sweet, while American-style brown ales tend to be hoppier and more bitter. The color ranges from amber to copper, with a few very dark brown beers.

Bitters are almost as various as ale itself with examples ranging from light brown to almost black. They are generally hoppier than brown ales but with a rich malty profile that competes nicely with the hops. Some bitters also fall into the pale ale category. Bitters are not bitter at all and are popular in English pubs, though plenty of bottled examples are available, too.

This black predecessor to stout was created in London by blending brown ale with an old ale. Porters are marked by roasted and chocolate flavors, and generally dry and well hopped. The style is popular with microbreweries and homebrewers.

Whether sweet or dry, stout is always a big beer with lots of roasted barley and coffee flavors. The black opaque ale is typically lower in hops than one might expect, and the roasted and coffee flavors offer a nice balance to the malty sweetness.

This Bavarian specialty goes by a variety of names, including wheat beer, hefeweizen, and weissbeir, and there are many variations. All use lots of wheat in the brewing process, which leaves the flavor imparted from the grains relatively low. They also use light and subtle hopping and a unique strain of yeast for fermentation. All of this results in a cloudy beer with a signature sweetness marked by bananas and cloves. It's also the least bitter ale style, typically ranging from just 8 to 15 IBUs.

Barleywine is the monster of the beer world. With a massive malt profile and hopping to match, this style leaves the taste buds exhausted and begging for mercy. Barleywine ranges from amber to deep copper and red colors, so it appears lighter than stouts. However, these are also among the strongest ales (8.5 percent to 12 percent ABV) and the hoppiest, with the softest weighing in at 35 IBUs and the boldest at over 120 IBUs.

How to Serve Ale

With such complexity, ales are generally more flavorful and often served at warmer temperatures. Storing ales at cellar temperatures, between 45 and 60 degrees Fahrenheit, is recommended.

Most ales do well when served in pint glasses, with the preference leaning toward nonick (or nonic) pints. This glass has a bulge near the top that showcases the aromas. It is also a good indicator for the ideal head: The bottom of the foam should fall at the top of the bulge, leaving about a two-finger head. Snifters and tulips are also popular for some of the darker and hoppier ales as the bulbous design accents the beer's aroma.

Pour ales slowly onto the side of the glass, starting with the glass tilted at a 45-degree angle. As the glass fills, bring the glass to an upright position.

The diversity of ales means that there's a good food pairing for nearly any meal. Some of the hoppier and more robust beers may be best enjoyed without food, though.

For the most versatile pairings, look to the blonde, pale, and brown ales. These can work with grilled foods, pasta dishes, bold flavors, and even spicy cuisine. Wheat beers are equally universal, working particularly well with German sausages, frittatas, and nearly any cheese. Save the dark stouts and flavorful barleywines for rich chocolate desserts and bold cheeses, or specialties like Moroccan duck.

The exploration of ales is an endless pursuit. Many breweries specialize in ales or particular styles of ale, and there's an ale that will surely appeal to every beer drinker. 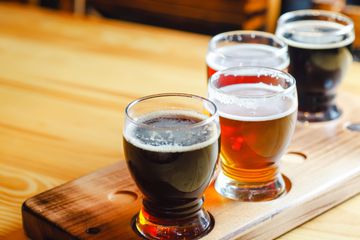