What Is Lambic Beer?

Lambic beer is brewed with spontaneous fermentation. It's a style of Belgian ale that doesn't rely on carefully selected yeast added by the brewer. Instead, the wort is left in open tanks to invite the region's microorganisms into the sugary feast. The result is a wild, funky, sour beer that varies wildly from batch to batch. Fruit lambics such as kriek and framboise are also produced, and gueuze is a blended lambic often called the "Champagne of Brussels." To drink a well-brewed lambic is not just to taste a great beer but to peer back into the history of brewing.

What's the Difference Between Lambic and Saison?

Lambic and saison are two styles of Belgian ale. They characteristically have a soft body, are hazy, golden to amber in color, and highly carbonated (though some lambics are rather still). The two tend to be sour or tart and naturally include fruity tones. Both may incorporate real fruit flavors as well.

In some sense, the two beers are also rustic. Lambics do not use the fine-tuned yeast selection common in modern brewing, instead, leaving it up to nature to provide the yeast that converts sugar to alcohol. While saisons do introduce yeast, this style is from the farmhouses of Wallonia, Belgium, and the brewing methods were rarely consistent. It often includes adjuncts like honey, herbs, and spices.

Lambics can be startling. The spontaneous fermentation creates a beer unlike any other in its sour, funky, and bright flavors. Beneath these in-your-face flavors lurk dusky, earthy notes that bring complexity and depth to the beer. 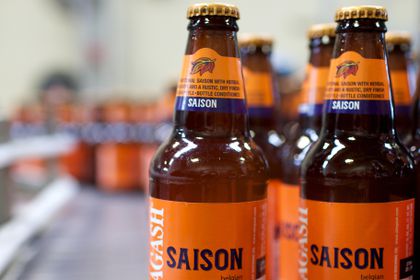 For all its wildness, lambic adheres to more brewing rules than many other styles of beer. Traditional lambic and gueuze methods are protected by European Union law, which lays out certain requirements.

The mix of wild yeasts and bacteria used to ferment lambic ensures that it changes with each batch. The other ingredients are more precisely prescribed. Lambics must contain a minimum of 30 percent unmalted wheat (40 percent is traditional), which provides some heft to the body. The hops need to be aged at least one year, with many brewers extending that to three years. These stale hops account for a beer with almost no detectable hoppiness and a negligible bitterness (IBU). The beer must also be aged for one year, though two years is typical.

Unlike others, in lambics, the fruit doesn't sweeten the beer. Instead, the yeast captures the fruit's essence during fermentation. Fruited lambics tend to be a bit less complex, and the sour qualities of the beer support and enhance the flavors of the fruits or berries.

Kriek (cherry) and framboise (raspberry) are the two most popular fruit lambics. Other flavors include cassis (blackcurrant), pêche (peach), pomme (apple), though any fruit may be used.

Gueuze (pronounced gurz, gurz-ah, or gooz) is a lambic made by blending old and new batches. Considered the best because of the amazing complexity, gueuze blends lambics aged for one, two, and three years. They must be bottle fermented and are highly carbonated with an enhanced tartness.

How to Serve Lambic Beer

Lambic beer is best served at cellar temperatures, or between 40 and 50 degrees Fahrenheit. Traditionally, it's served in either stemmed tulip glasses or straight-walled tumblers. Kriek may also be served in a glass similar to a brandy snifter, and framboise lambics in Champagne flutes.

Champagne-style bottles are most common for lambic beers, and most are 750 milliliters, just like wine. A few brewers offer smaller 250-milliliter bottles. In Belgium, it's common for waiters to rest the bottle in a basket so the neck leans upward after pouring lambics for patrons.

Since it is so carbonated, lambics need to be poured very slowly. This also avoids disturbing the sediment; A small amount of lambic can be discarded directly after opening to remove sediment as well. Tilt the glass and pour onto the side of the glass, slowly moving the glass to an upright position as it fills.

As a companion to food, it's helpful to think of lambics like champagne. Straight lambic is much like dry champagne while the fruit lambics are similar to sweet champagne. From this perspective, it's easy to see that there are a few foods that cannot work with lambic.

Lambics are particularly good with fruits, salads, and sweets, including a rich chocolate cake. Shellfish and soft cheeses are among lambic's top pairings, and this beer is quite good with cream sauces. Spicy foods, including Indian cuisine, offers an interesting dinner experience as well.

The list of traditional Belgian lambic brewers is very small, and they're all highly recommended. For the best lambic, look for oude ("old"). This is a style that adventurous American craft brewers have taken on as well, often in seasonal or limited releases. There are also fruit and sour beers that don't use traditional techniques, though they may use "lambic" on the label. 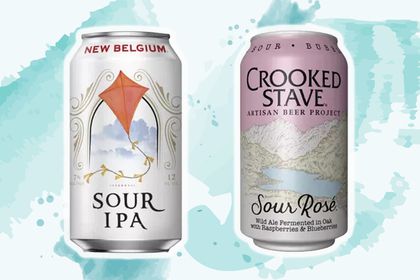 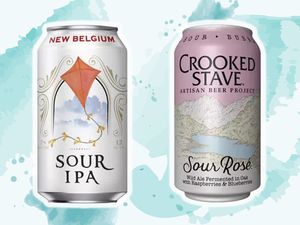